It jars when I hear people say online learning isn’t used. Don’t you use Google, Wikipedia and lots of other online services to learn? I know you do, because the stats are overwhelming. In fact billions use online learning, daily. 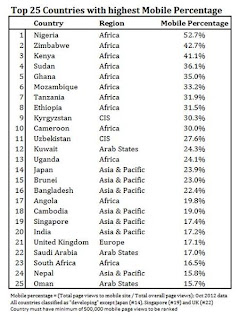 Increasingly, this is done through mobiles. Compare the 6 billion mobile subscriptions in the world to the 600 million broadband connections. We’re close to seeing mobile as the most ubiquitous piece of personal technology ever, and it’s the developing world that’s experiencing the fastest growth. Check out this table which shows the countries with the highest mobile access to Wikipedia.
Nevertheless, in the developing world, where mobiles have become massive, internet connectivity is scarce and expensive, tariffs remain a problem. Here the mobile is often the only means of accessing the internet. A mobile is a godsend to someone who is poor, often their only link to erratic employment opportunities, services and money management. Yet access to learning is hampered by cost. Call and data time is precious and used carefully and sparingly.
Zero tariffs
An idea that has been around for some time is now getting real traction – zero tariffs for education on mobiles. Simple, but it opens up knowledge and educational opportunities to billions who do not have easy access to books, libraries, schools and learning. As Eric Schmitd says in his new book The Digital Age (a largely tedious tomb) in the developing world the mobile phone is often the only “lifeline to learning”. I first heard of the Zero tariff some years ago in relation to Dr Maths, in South Africa. Started in 2007, it grew rapidly, and unexpectedly to thousands of users.  Maths tutoring is delivered, largely through MXit. Tutors, from anywhere in the world, help students with questions and homework. It uses text messaging. Interestingly, when they faced the problem of scalability (tutors are the scarce resource) they upgraded the architecture so that content could be created to produce ‘bots’ or automated replies, reducing the load on live tutors. Geoff Stead also points out that it has happened even in the developed world, with free SMS messages for TextForBaby in the US, a mother and child healthcare service.
Wikipedia Zero
But the big news is Wikipedia Zero, now available to an astonishing 470 million subscribers in Africa, India, Eastern Europe and the Far East. Of the 25 countries that have the highest rate of mobile traffic on Wikipedia, the top eight are in Africa and an astonishing 22 are in the developing world. Wikipedia Zero is also now available in India to 60 million subscribers (through Aircel). Note that in India, mobile penetration in India is over 70 % at 867 million subscribers, compared to only 77 million people with access to the internet (Comscore, June 2013). This move is born of necessity as the context has turned the developed world’s model on its head. Indonesia, Malaysia, Cambodia, Sri Lanka and Bangladesh and many other countries are on board.
Local languages
An interesting side effect is the stimulation of language versions of Wikipedia. To be really useful Wikipedia must be translated into local languages. This statistic says it all;  Hindi Wikipedia, has 22.1 % of page views globally from mobile, compared to 17.3% for ALL other languages. Wikipedia Zero, I suspect, will accelerate translation into many other languages.
Win-win
Even on a purely commercial basis, I see this as a win-win situation; learners getting free services and telcos increased reputation, reach and market edge. Like Google and Facebook, learners get a valuable service for free, the companies increase their brand capital and deliver adjunct services.
Conclusion
Wikipedia came out of the blue to become a consistent top ten website, showing that there is a massive thirst for online knowledge. What was even more astonishing was that it was crowdsourced, for free. No one saw that coming. Now we have the opportunity to extend free production to free distribution on powerful, portable and personal devices that have become ubiquitous in the developing world. If that doesn’t make your heart leap with hope and optimism, what will.