On the ground, in West Africa, rumours abound. Here's some real examples of misinformation which is often viral in itself:

1. Misinformation: water, food or airborne transmission
2. Bad journalism: tendency of the media to exaggerate and look for sensation
3. Rumours: ‘salt-cure’ large doses as a cure, cases of hospitalisation
4. Traditional medicine: people turn away from treatment they need
5. Political scare stories: conspiracies by government & foreign powers, virus seen as deliberate extermination tactic
6. Rejection: majority of survivor children in Kenema district are not welcomed back into their communities, even though they no longer pose any risk to population


7. Ebola-denial: Liberia - some deny the very existence of virus
So education, at this point, may be the most important digital vaccine against the spread of the disease. Ola Rosling and I recently gave a talk at Online Educa on the digital context of Ebola.
Roslings & data
Ola's father, Hans Rosling, is in West Africa, trying to get clean data at source, in order to help quantify the problem, so that resources can be better targeted. This is not easy. In countries where infrastructure and literacy is poor, collecting data is not trivial. Collecting it is hard, as much needs to come from remote areas and treatment centres. Even when it is collected it can be wrong. There is alsomthe problem of governments not wanting to tell people the truth which the data may reveal. Hans has found himself having to pay people's mobile phone bills from his own pocket just to get the channels open.This is a poor but complex environment. Despite these problems you have to admire people, like Hans, who just offer to help.
Smallpox

How many people dies of SMALLPOX in the 20th C? Estimates lie between 300-500 million. The disease has been around for thousands of years. Marcus Aurelius, the Roman Emperor died of the disease. Yet we conquered it in 1979. This little girl, Rahima Banu, was the last case of  last case of Smallpox in the world, in India. Just when the disease was thought to have been under control. A huge outbreak took place in India. It didn’t help that a deity called Shitala Mata stopped people reporting cases as they thought that smallpox was the visitation of a deity. It was bad luck to bring strangers into your house when the deity was present. Smallpox was defeated by feet on the ground and the simple technology of millions of printed pictures and posters.
Travel
But now things are more dangerous, as travel by air, land and sea is getting so much better. The worry is not so much the US and Europe, where healthcare systems are capable of coping with cases, even outbreaks. The problem is travel east, where many of the word’s poor live, to places such as India and China.
Digital vaccines
The lesson which epidemiologists stress time and again is EARLY DETECTION and EARLY RESPONSE. Remember that Ebola has struck before, in Sudan in 1976 and Zaire in 1979. There was even an outbreak in monkeys used for medical research in the US in 1989. This time, however, the Ebola outbreak took place in the internet age. This matters. The world now has its own nervous system, a cable, satellite and telecomm network that, especially through mobile in Africa, is constantly gathering data. We can now listen for pain points, react quickly to the key signals within the noise, for early intervention. When something threatens us, we can also use this network to deliver the equivalent of information antibodies to the point of infection, isolate that infection and get to work with information antibodies and digital vaccines to help prevent further spread.
The advantage of digital is its mobile delivery on platforms such as SMS, Twitter and Whatsapp, that are already being used in situ. With web-based learning, people can receive their education and training at a distance as well as avoiding potentailly hazardous group sessions. This is not to say that practical learning by doing is unnecessary, only that much of the blend can be delivered online, using images, video and audio. At the moment there is no cure or vaccine, so digital apps and education may be the best vaccines we’ve got.
1. Ebola & Whatsapp

What’s Whatsapp got to do with Ebola? Trusted information provided free by the BBC, a respected brand in Africa, is now available on Whatsapp. Peter Horricks of the BBC is right when he states the simple but obvious fact that “Information will literally save lives.” It’s accessible, it works and it’s free. If you subscribe, you get three pushed messages a day in a number of media including audio and images, as literacy is an issue. Wisely, they are also delivering the messages in English and French, which matters, as some of the countries where the outbreaks are at their worst are French speaking. Indeed, the majority of the bordering countries around the outbreak are French speaking.
2. Ebola App

The free Ebola Prevention Mobile Application is available on the Android Play store. There is also as an SMS-based application available on CloudSMS. It has four features:
Affected Area Mapping
App shows you your location in relation to affected areas around you on map, And gives you preventive measures to help you prevent this deadly disease
Ebola Hot zone detection
The App tells you from time to time if your current location has been affected by Ebola Virus Disease Outbreak
Preventive Measures
When you are in an Ebola affected area, The App notifies you and gives you preventive measures based on the proximity of your current location to affected areas
Latest Info
Up to date Information on Ebola around you and from all over your region
Another great dimension to this story is the fact that it is being developed in West Africa by Innovative Technologies for Development Foundation (IT4D) a Nigerian Based Not for Profit organization, that was behind NigeriaDecide.org, a crowd sourced platform for ordinary people to prevent election rigging in Nigerian Elections.The Ebola app work coordinated by Akinmade Akintoye, CTO of CloudWare Technologies.
3. Podcasts 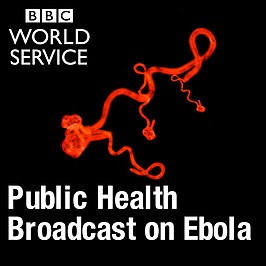 Audio is the forgotten medium in learning, but in areas where literacy is a problem and you want to deliver authoritative voices on an important topic, it can be a powerful medium. Radio is still an important information channel in Africa. The BBC have already delivered a series of free podcasts, twice a week, debunking the myths along with other topics. So far the podcasts have covered the testimony from Sierra Leonean Ebola survivor, Yusif Koroma, the first person to have survived at the new treatment centre in Freetown's Connaught Hospital. It provides a rare insight into coping with the virus and recovering from it. In another they look at the importance of clear and accurate information which can help minimise the spread of the virus.
4. Ebola MOOC 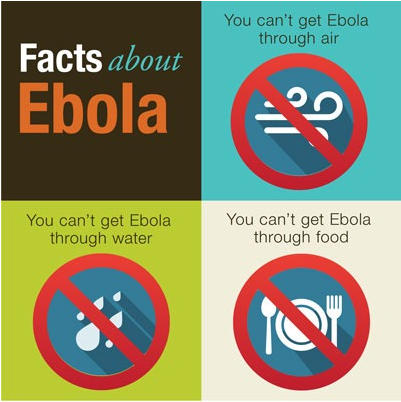 A more formal approach is taken by the free MOOC Understanding the Ebola Virus and HowYou Can Avoid It, by the Irish organisation Alison. With over 10,000 completions, which can be taken on a range of devices, even mobiles, it provides a valuable educational experience. As Mike Feerick of Alison says "If new information is discovered about Ebola, or how to treat or avoid it, we can instantly relay it to a huge number of learners worldwide." A MOOC is a great way to get formal courses out, as they’re scalable, free and updatable. This is not possible through traditional educational institutions. There’s already a French version, with Arabic in the pipeline.
5. Healthmap app (data & algorithms)

This app was credited with identifying the Ebola outbreak before the WHO. Remarkably, the first signs of fever were tracked in the forested areas of Guinea on March 19. They contacted the WHO, who got their first report many days later. The Boston Children’s Hospital Team behind the app, use algorithms to find and filter thousands of social media, news and government sites. It is this unique use of big data and algorithmic selection that is coming to the fore in disease outbreak reporting and prevention.

Armil Smailhodzic’s of West Kentucky University developed an app that draws on Twitter data to identify outbreaks and news on Ebola. This app takes a different approach, in that it only tracks Twitter data. Interestingly, they found that, although people in rural Africa are suspicious of Government and outside agencies, they do Tweet. The trick was to filter Tweets from actual sources out from Tweets that just talk about those countries and sources. The app provides maps along with a Twitter feed on prevention and reports.
7. Facebook
Indirectly, all of you Facebookers have contributed to Ebola prevention, as Mark Zuckerberg has donated $25 million to the cause.  The Gates Foundation have chipped in $50 million and Paul Allen another $12 million. Between them, they have contributed more than China, Russia, S America, Australasia and the Middle East put together. This matters, as raw money matters and Governments have been known to make promises, then take the money fromother budgets or not pay up.
Conclusion
Other informative, authoritative and helpful online resources include Wikipedia, WHO and the CDC. Far from being an uninformative mess, the web provides a remarkably consistent set of resources and tools that play a significant role in prevention and control. What I like about these efforts, is the delivery is often in at least two languages, although it’s all very well to do English and French, local language production may also be necessary. This is already realised on local TV broadcasts, but surely the budget could be found to apply it to the other media, especially podcasts. Sensitivity to literacy issues has also been shown through the use of different media. I’ve taken the MOOC and looked at the other apps. It was quick and easy. This is solid stuff, well designed, well written with appropriate media and a variety of delivery channels, many to mobile. The fact that its scalable, accessible and free, with the ability to update in the light of new information, is a godsend.
at October 18, 2014

Thank You.
It's funny: We just created an amazing Infographic on "Ebola Virus. What Is It? Interesting Facts" because we found people were missing the essential facts about Ebola.

Let me know what you think:)