Young people are watching less than half the amount of TV than adults (1.5 hrs a day versus 3 hours a day). A quarter of 11-15 year olds said that some weeks they watched no TV at all Ofcom (Nov 2014).
We had theatre, movies, radio then TV. But all media have a lifespan and I for one am pleased that TV will be demoted to a has-been medium. It will not disappear. Nothing disappears. But it will die back to being a minority medium. That’s inevitable. I’d argue that it is also a good thing.
TV the broadcast culture
First. I have to say that I’m not coming at this as a philistine. I am a lifelong member of Generation TV. Born in 1956 just as TV was on the ascent, I saw England win the World Cup in 1966, man walk for the first time on the Moon in 1969 and the Berlin Wall fall in 1989. Sure there are spikes of excellence on TV but the bulk diet of property-selling, cooking and buying, selling junk, is now horrifying. But this is NOT my main target. The real reason for TV’s decline are changes in technology.
TV the problem
Aldus Huxley, in Brave New World (1932) anticipated ,with Soma, a drug that would entrance and disempower our species. McLuhan, in The Medium is the Massage (1967) saw television as an all consuming medium, removing private identity. The critique deepened with Neil Postman’s Amusing Ourselves to Death (1985) where he saw form shape content, dialectical thought and conversation being squeezed out of society. In Bowling Alone: America’s Declining Social Capital (1995) by Robert Putnam, post-war society is seen as having filled a huge deficit in social activity with suburbanization, commuting and above all TV. This is taken further in Why Viewers Watch by Jib Fowles, who calls TV a form of social displacement or ‘social surrogacy’ where soap operas and sitcoms become your imaginary friends, as you can watch it alone, displacing real friends and family. It’s time we put this all too dominant form of surrogacy to bed.
1 trillion hours a year

Clay Shirky’s Cognitive Surplus (2010) moves us beyond the descriptive to the prescriptive. Cognitive Surplus is a direct assault on TV, as the post-war medium that soaked up almost all of our free time. TV “immobilizes even moderately attentive users, freezing them on chairs and couches”. This 50 year aberration made us less happy, pushing us more towards material satisfaction than social satisfaction. Year on year we spent more time in this “vast wasteland”.
Quantifiably we spend over a trillion hours a year watching TV, more than 20 hours per week per person. Shirky’s cardinal argument is that this passive ‘cognitive surplus’, squandered on passive consumption, could be put to better use. One year of US TV watching is the equivalent of 2000 Wikipedias.
In practice, the internet has allowed us to ‘make and share’, with sharing being the driver. We produce rather than just consume and “the stupidest possible creative act is still a creative act”.
TV, unlike the telephone and internet, is unbalanced. Being part of the web is being part of a global network and the numbers matter. More is better as we can harness this global cognitive surplus to create a new future that is less passive. It is a matter, not of using it up but using it constructively, through broad experimentation. He compares the web with the print and telephone revolution, in that it results not in a monoculture but increased and unpredictable forms of communication arguing for ‘as much chaos as we can stand’. Fundamentally, he sees interactivity and social communication as a more natural form of behaviour, destroyed by TV, but coming back to the fore.
TV is dying
Shirky has been proven right, TV among the young has been falling year on year for the last ten years, as they drift towards the highly participatory culture of the web, through second screens, social media, games, downloaded and streamed media and smartphones. For the first time the young are fleeing from TV to the internet where they communicate, make, share, collaborate. They like their new found autonomy and empowerment.

So what are they actually doing with their new found free time? When asked what children would miss the most, it is not TV that comes out top but their mobile. And what are they doing on their mobiles, not emailing and making voice calls but messaging, photo messaging and social networking.
TV to Second screens
Gogglebox, that so-called fly-on-the-wall piece of TV is a lie. Why? It presents a dated view of ‘family’ viewing and interaction. First, some of the family will, in reality be in another room, second, no one is seen with a mobile, tablet or laptop in their hands. This second screen activity is enormous, so that even when TV is being watched, it’s not being watched as much as they would like to believe. 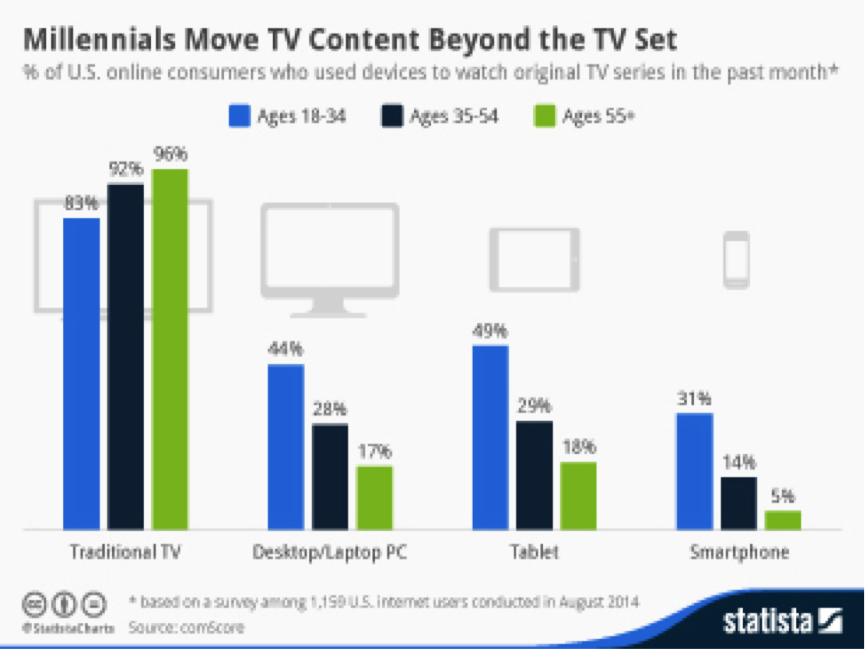 As we can see it’s people of all ages who use second screens but the younger you are the more likely you are to use one.
The majority of our daily media interactions have switched from print and radio (10%) to screens (90%) with an average of 4.4 hours a day on screens. It gets even weirder. When my niece watches TV programmes with her mates they watch it in separate houses but stream at the same time, so they can chat on socila media while watching the same programme.

Yet TV sets are now in the minority (24%) as compared to computers, tablets and mobiles.
TV is no longer the attraction it used to be. Even when we are in front of the TV, we are likely to be doing other things on other screens.
TV to Streamed media

There’s loads of shortcut gadgets that bypass satellite, cable and broadcast TV. Chromecast, Apple TV, Amazon Fire, Roku, Netgear’s NeoTV, Keedox Smart TV (Android) and Now TV Sky are all cheap devices that we use to stream content. Our sources are no longer TV companies, it’s Netflix, Amazon Prime, YouTube and Bittorrent.
Netflix, started by a software guy, who made his money in DVD rentals, now delivers streamed content that is neither TV nor movies, but just Netflix. The traditional model of broadcast TV is dead, as is the idea that TV companies control what is going on. The method of delivery is far more consumer focused with their 2009 $1 million prize for an algorithm that would increase the efficiency of their recommendation engine. They provided a training data set of 100 million ratings that half a million users gave to 18,000 movies. It worked and Netflix’s recommended viewing model soared. They’re even using data to feed to scriptwriters for future series in terms of successful scene structure.
TV to Games

Kevin Spacey is the star of the new Call of Duty game – it’s that serious. The games industry is now bigger than the film industry and has sucked a whole generation of young people away from watching TV. This is not second screen stuff, this is using other devices, games consoles, PCs, tablets and mobiles to do something they see as far more thrilling and participative than TV. One effect is the raising of the game with regard to interactivity. These gamers don’t want second and third rate TV. Their bar is high.
TV to YouTube
YouTube has become a rival to TV. It has become a searchable media platform, with over 1 billion unique users and over 6 billion hours watched a month (an hour for every person on Earth). This is way more than any cable network. Then there’s Vimeo and Vine. 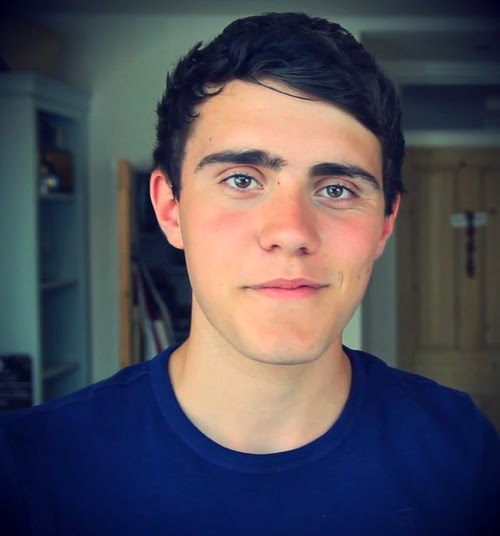 Alfie Deyes (see my blog piece on Alfie) has topped The Sunday Times Bestseller Book lists for weeks, appears on the Band Aid single (even though he’s never sung a note) and has a global reach that put most stars to shame. Yet you’ve probably never heard of him. Alfie’s a phenomenon. His Pointless Blog, on YouTube, has 3 million subscribers and over 136 million views. That’s not counting his million followers on Twitter and over a million followers on Instagram. Alfie is huge. Alfie can’t go anywhere without being mobbed. Alfie, Pwediepie and Zoella, all live in Brighton. These kids are unknown on TV but eclipse that medium by speaking directly to people in videos they make and upload themselves. They are not mediated by some TV type who wants to mould them.
TV to Social media
Another pull that takes millions out of the orbit of TV is social media. Facebook, Twitter, blogging, LinkedIn, Flickr, Instagram, WhatsApp, SnapChat. The rise of social media platforms with audiences as large as 1.5 billion and others at many millions, has bitten a huge chunk out of TV viewing. Even when people are watching TV, they’re usually doing something social.
VR is a medium not a gadget
Here’s a last thought. TV and most media are 2D but we live in a 3D world. Early experiments with 3D have been a disappointment, mainly because they’ve been weak add-ons, neither 2D or true 3D, just ‘effects’. This is about to change. VR is not a gadget it is a medium and Facebook has just invested $2 billion into the Oculus Rift. It’s coming and it will change the media landscape. The only limitation in this new 3D world is our imagination. Even if it is not VR or the Oculus, something else will come along, it always does.
Conclusion
TV is dying. The money, mainly ad revenue, is flooding off to other screen-based media. TV screens are becoming a small subset of all screens as mobiles, tablets, consoles and computer sales go through the roof. In terms of content traditional TV fare, soap operas, sitcoms, quiz shows etc. have to compete with streamed stuff – movies, as well as games, YouTube, Social Media. The TV industry is also dying as new players enter the fray, Netflix, Amazon…. I, for one, do not regret its demise. It has been a 50 year aberration, dominating our lives but it is a passive, wasteful medium that has trapped us into fixed content and patterns of thought.