Sex and VR
Sex, like most forms of human activity, is a 3D affair. It involves the intimacy and physicality of the 3D human form. Virtual sex gains a lot from ‘presence’ in VR – the actual feeling that you are there with someone else. It’s one thing to watch, quite another to feel as though you are actually there, with that person, or actually having sex with that person. VR is not watching sex it’s having sex. It is a natural for VR. Pornography is the creation of fantasy sex. Those fantasies can now be very real. If you want an idea of the effect of early content on people experiencing VR sex for the first time, watch this.
1. Content – human presence
VR content is a mainstream category in many porn sites. They have been experimenting and quick to innovate with VR, long before any consumer VR hardware was available. One thing they quickly learned was that the full 360 degree was unnecessary. Interesting things in sex tend to happen in one direction - that's alesson many 360 and VR folk need to learn. As most sex is in one direction, so they limited the fixed field of view to 180 degrees or less. At this level, you are still the voyeur but the sense of presence is increased and you have the ability to look around. What some have reported, who have used Naughty America’s passive porn in VR is a sense of being there but also an experience, not of small figures on a small screen, but sex on a human scale. We should listen to this as it is exactly what we need to learn about the use of VR in learning – presence, the human scale, the idea that we can simulate human experiences in soft skills (as oposed to hard skills!) and all of those things we regard as difficult to teach.
2. Interactive – human touch

To really participate, one needs to add the sense of touch. The haptic side is exactly what has been offered for centuries through sex toys. This has been supplemented with VR, so that the sex toy is accompanied by imagery of a real or graphically created partner(s). Even before any commercial VR was available as a consumer device, there were people working on mechanical masturbation devices matched against the 3D vision of someone you are having sex with. Tenga developed a masturbator that synched with a VR image back in 2014. Much of this took place in Japan, with dolls providing the haptic stimulation. This ‘haptic’ market had been dominated by sex dolls, and by dolls we mean something way beyond cheap plastic blow-up balloons. 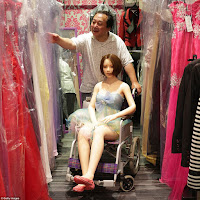 This married Japanese businessman fell in love with his doll (‘she isn’t just after money and never betrays me’). These figures are now being used with VR to add the haptic dimension. The use VR with AI programmed dolls are also being made, where you choose the personality and your partner talks back.

A full body sex suit has also been developed that delivers touch all over your body, with the addition of a sex toy. Synched with VR you get the sensation that someone else is touching you. It was invented by, you guessed it, the Japanese company Tenga. It’s actually an April Fools joke but for the full weirdness of this potential idea, here’s the video.
The haptic dimension has obvious applications in healthcare, where one has to investigate, apply CPR and so on. It is also applicable in the manipulation of objects in vocational skills. We get a glimpse here of a direction of travel as the haptic moves beyond hand controllers to full body sensations nd manipulation of 3D objects in a 3D environment..
3. Interactive live
Live performance, where the performer operates a joystick that controls a device (sex toy) over the internet has been around since Realtouch in 2009. It can also be synched to videos and VR experiences to deliver. There are also, wait for it, mind controlled dildos. You think that is odd, wait for teledildonics.
4. Teledildonics – do it to each other
Ted Nelson coined this term back in 1975 and it has been around for some time, with physical, hands free masturbators, for men, women and couples. We used to call on the telephone, now we Skype and Facetime, next is VR - and for some Teledildonics.
Realtouch was quite a design piece, with movement, heating and a lubrication reservoir. A couple of years later Lovense launched iMan and iLady, then Max and Nora, which could work remotely over Bluetooth. LovePalz then produced Zeus and Hera for couples who want two way control. The idea was that each device reacts to the other – faster/slower, tighter/looser.
The new kid on the block is Kiiroo with Onyx and Pearl. Pear and Onyx are paired devices that allow sex at a distance with your partner. Onyx is for men with ten rings that can send and receive signals. Pearl is its female partner device, with a vibration motor and five rings. If you’d like an idea of what sex at a distance is like watch this VICE video, where a couple try this for real. The woman masturbates the dildo and he, remotely experiences the sensation in his vagina device. The guy describes it as half-way between masturbation and real sex – in other words, it’s getting there.
5. Context and fantasy
There’s even a service in Las Vegas that allows you to experience VR in your hotel room. It provides VR porn in a room built to look like the hotel room you’re actually in - to add realism. Porn has always been about fantasies and hyperreality has been around for years in the popular anime porn as well as exaggerated fantasy figures. VR means that anything is possible in terms of created fantasy worlds. There are literally no limits to what the imagination can dream up and turn into a sexual experience. You can literally have sex with anything, anywhere at anytime. There's already some pretty weird stuff out there – expect more.
6. Group sex – virtual bachannal
As multiplayer VR develops, group sex is also possible and, guess what, it’s already here. 3DXChat avatars and in the game they meet, chat, date and have sex. You can be anyone and operate on a fantasy level with other like-minded fantasists. This is the sort of world that Facebook envisage in social media. They know that the real social world is 3D, as opposed to the current flat world of text and 2D images. Zuckerberg bought Oculus Rift for $2.3 billion - that may be a bargain if he has bought a huge chunk of the future.
7. Sex education & therapy
Many moons ago I produced an interactive version of The Joy of Sex, complete with Mr & Mrs game, instructional pieces and so on. It was designed for couples and not porn, although the boundary, as the original book showed, is not at all clear. There may well emerge some positive applications for VR in sex.
Virtual Sexology, an educational site for sex, is already up and running.. Actually, what they say is that this is the world’s first fully interactive lovemaking tool, a safe space for learning how to have great sex using VR. The site has a sexologist discussing the possibility of both sex education and therapy. This idea of coaching and instruction over a distance in real acts is interesting.
Future of virtual sex?
We have to be honest here. Sex is a powerful human instinct and its application in satisfying basic human urges through VR will be huge. One can therefore expect a huge amount of innovation here in the quest for realism and beyond that, fantasy, as well as some interesting consequences, in terms of regulation. This may well be the area that drives VR and exposes the many issues, good and bad, that VR raises.
VR may challenge the very concept of what sex will be in the future. It takes technology beyond the simply visual realm into the participatory and on to levels of realism, even hyperrealism, that have never been possible before. VR offers not flat images and video for the voyeur but being there, experiencing sex as if it were real.
Will the virtual world be so alluring and enjoyable that the real world pales by comparison? Will virtual sex be cathartic, excessive or damaging? What are the political issues? Will boundaries be transgressed? Will we all experiment more? How will it be regulated? The technology is always ahead of the sociology, so we need to start thinking about this now. Porn will lead the way in making us face up to the realities of virtual reality.
Conclusion

Thanks for sharing masturbators for men, Keep up the good work.