Odd thing this ‘Leadership’ business. I’ve been writing about it for ten years and get roughly the same reaction to every piece – one of outrage from those who sell their ‘Leadership’ services, either as consultants or trainers. In these cases, I refer to the wise words of Upton Sinclair, “It is difficult to get a man to understand something, when his salary depends upon his not understanding it!”

But a far more interesting spat ensued when I criticised some of the best-selling books that got this whole Leadership bandwagon rolling, namely In Search of Excellence and Good to Great. Tom Peters himself joined the fray, as outraged Leadership consultants huffed and puffed. Some showed real Leadership by simply hurling abuse, accompanied by GIFs (showing outrage or dismissal), doing the very opposite of everything they claim to admire in all of this Leadership piffle. What I learnt was that there is no room for scepticism or critical thinking in the cult of Leadership – you must bow to the God of Leadership or be rejected as an apostate.

To be fair, Tom Peters retweeted the critical piece and my replies, so hats off to him on that front but his responses bordered on the bizarre. 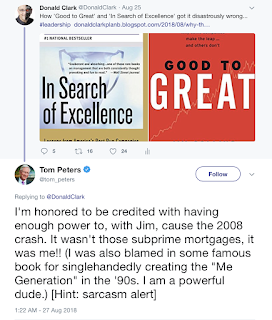 So far, so good. But I wasn’t blaming him and Collins for the crash. What I was actually saying is that a cult of Leadership, sustained, as Jeffrey Pfeffer showed, by a hyperactive business book publishing and training industry, produced a tsunami of badly researched books full of simplistic bromides and silver bullets, exaggerating the role of Leaders and falsely claiming to have found the secrets of success. This, I argued, as I had personally seen it happen at RBS and other organisations, eventually led us up the garden path to the dung-heap that was the financial disaster in 2008, led by financial CEOs who were greedy, rapacious and clearly incompetent. They had been fattened on a diet of Leadership BS and led us to near global, financial disaster. 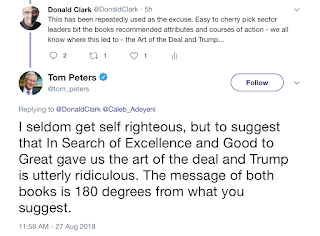 Hold on Tom, I wasn’t saying you two were singularly responsible. I was making a much wider point about the exponential growth in publishing and training around Leadership, like Pfeffer in his book Leadership BS, showing that it had, arguably, led to near disaster.

As the cult of Leadership took hold, I knew that something was awry when I dared criticise IBM at the Masie Conference. Elliot was chairing a session on enterprise training software and I pointed out that IBM had sold such a system to Hitler. In 1939, the CEO of IBM, Thomas Watson, flew across the Atlantic to meet Hitler. The meeting resulted in the Nazis leasing the mechanical equivalent of a Learning Management System (LMS). Data was stored as holes in punch cards to record details of people including their skills, race and sexual inclination and used daily throughout the 12 year Reich. It was a vital piece of apparatus used in the Final Solution, to execute the very categories stored on the apparently innocent cards - Jews, Gypsies, the disabled and homosexuals, as documented in the book IBM and the Holocaust by Edwin Black. They were also use to organise slave labour and trains to the concentration camps. He went apeshit at me. Why? IBM were sponsors of his conference. lesson - this is about money not morals.

I remember seeing Jack Welsh, of GE, pop up time and time again at US conferences and talk about how it was necessary to get rid of 10% of your workforce a year and a whole host of so called gurus who claimed to have found the Leadership gold at the end of the rainbow. There was just one problem. The evidence suggested that the CEOs of very large successful companies turned out to not to be the Leaders their theory stated they were. Indeed, the CEOs of financial institutions turned out to be incompetent managers, driven by the hubris around Leadership, who drove their companies and the world’s financial system to the edge of catastrophe. Bailed out by the taxpayer, they showed little remorse and kept on taking the bonuses, mis-selling and behaving badly.

In the 90s and the whole post 2000 period we then saw the deification of the tech Leaders – Gates, Jobs, Dell, Zuckerberg, Musk and Bezos. Who wants to be a billionaire? became the aspiration of a new generation, who also lapped up the biographies and Leadership books, this time with a ‘start-up’ spin. Yet they too proved to be all too keen on tax evasion, greed, share buybacks and a general disregard for the public good. Steve Jobs was a rather hideous individual - but no matter - the hopelessly utopian Leadership books kept on coming.

Jump to 2018 and Trump. How on earth did that happen? Oh, and before we in the EU get on our high horses, Italy did the same with Berlusconi. Even now, Andrej Babis, a billionaire businessman, has become the President of the Czech Republic in 2017. But back to Trump. He’s riding high in the polls but let’s look at how he got to become President. First the whole ‘I’m a successful business Leader’ shtick that gave him a platform on The Apprentice, then the campaign on the premise that he, as someone who was better suited to the role than traditional politicians, was the real deal, ‘the deal maker’. He even had his own sacred ‘Leadership’ text – The Art of the Deal.  The polling is interesting – his supporters don’t care about his racism and sexism, what they admire is his ability to get things done. They have elected, not a President, but a CEO. This is the apotheosis of the cult of business leadership, the American Dream, reframed in terms of Leadership BS, turned into a nightmare. 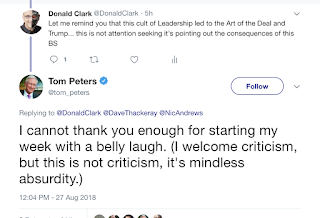 And on it went, our Leadership guru descending into sarcasm and abuse. This is exactly what I have been writing about for the last ten years, the hubris around Leadership. Is this what Leadership is really about -  going off in a hissy fit when you are challenged? It sort of confirms what I have always thought – that this Leadership movement is actually a Ponzi scheme – write a book, talk at conferences, make a pile of cash…. lead nothing but seminars, then take absolutely no responsibility when your data turns out to be wrong or the consequences are shown to be disastrous.

We have fetishised the word 'Leader'. Everyone is obsessed by doing Leadership training and reading 4th rate paperbacks on this dubious subject. You're a leader, I'm a leader, we're all leaders now - rendering the very meaning of the word useless. What do you do for a living? I’m a ‘leader’. Cue laughter and ridicule. Have you ever heard anyone in an organisation say, We need to ask our ‘Leader’? Only if it was sneering sarcasm. It was invented by people who sell management training to fool us all into thinking that it's a noble calling but is it all a bit phoney and exaggerated and often leads to dysfunctional behaviour.

As James Gupta said, on this thread, “Leader, innovator… yes they are legit and important roles, but if you have to call yourself one, you probably ain’t”… then even wiser words from a guy called Dick “If your job title is a concept then maybe it’s not a real job.”