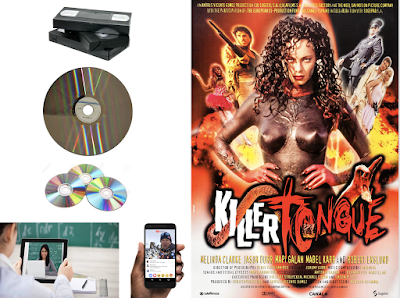 Video for learning is great at some things, not so great at others. Some time back I attended a session on video for learning and found that neither the commissioners nor the video production company had looked at a single piece of research on video and learning. They told us that people loved the work and since then I’ve seen a lot of 'Netflix for learning’ delivery. That’s fine but let’s step back a minute..What I didn’t see was much evidence that people were actually ‘learning’ much. I have been involved in video production for 35 years, from corporate videos delivered on VHS cassettes, interactive videos on Laservision (in many ways way beyond what we currently see), CD-ROMs and now streamed. We even made a feature film The Killer Tongue – lost a pile of money on that one and lesson learnt.

Video is great for emotional impact and so attitudinal shift, showing processes and procedures, moving objects, going inside things down to the micro-level or to places we can’t get to like space or the inside of a nuclear reactor. It can also present people, talking to you. But what works best for LEARNING? The evidence shows that many of the things we do in video are just plain wrong. There’s decades of research on the subject, that mostly remains unread and unloved. For a good summary, read Brahme (2016). So let’s surface a few of these evidence-based pointers.

What can we learn from Netflix? 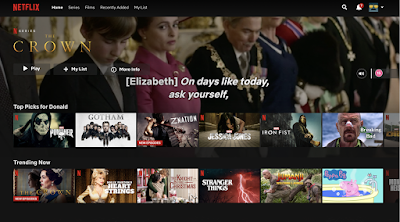 It wiped out Blockbuster and has become a behemoth in the entertainment industry because it adopted a demand-AI-driven, technological and personalised solution in a world that was stuck in scheduled, supply-side delivery. Netflix is easy to use, searchable and personalized, extensively A/B tested, tiled and has an AI recommendation engine behind the interface. It is also time-shifted, streamed and multi-device. But what really makes it sing is the data-driven algorithmic delivery. This is why learning and video folk need to pay attention to technology, especially AI. That other behemoth, YouTube, the largest learning platform on the planet, is also searchable, personalised and time-shifted.
But Netflix is entertainment, not learning content, so what more do we have to learn, from cognitive science about what makes great learning video? 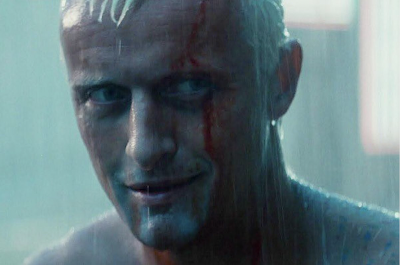 Many can recall famous scenes from their favourite film. Mine is the Rutger Hauer scene from Bladerunner, where he sits, dying on the roof in the rain and gives a moving soliloquy about the joys of life, forgiveness and death. Many recall the scene well but few can remember what he actually said. That is because our episodic memory is strong and video appeals to that form of memory, but video is terrible on semantic knowledge, what we need to know in terms of language. I can remember the scene and literally play it back in my head but I can’t remember the speech. This is why video is not so good at imparting detail and knowledge. There is a big difference between recalling episodes and knowing stuff. Yet so often we see talking heads and text on screen that tries to do exactly that. 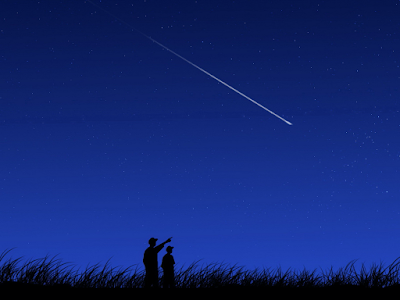 Learning is a lasting change in long-term memory and video suffers from the lack of opportunity to encode and consolidate memories. Your working memory lasts about 20 seconds, can only hold three or four things in the mind at one time and without the time to encode it is quickly forgotten Sweller (1988). Our minds move through video like a shooting star, where the memories burn up behind us. Without additional active, effortful learning, we quite simply forget. A big warning here, people think they have learnt from video but as Bjork (2013) and many others have shown, much of this is illusory learning, mistaking the feeling that you’ve learnt things but when tested, you have not.

How long do learners engage? 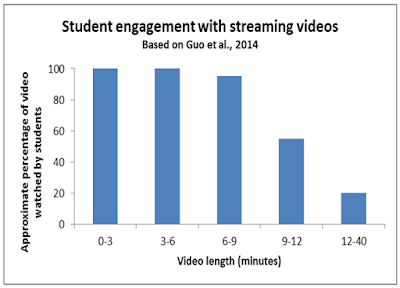 We know from Guo (2014), who had a large data set of learning video data gathered from MOOCs, that learners drop out in large numbers at around six minutes. It drops dramatically down to 50% at 9-12 minutes and 20% beyond this. Evidence from other studies on attention, using eye-tracking, confirm this quite rapid drop in arousal Risko (2012). Keep videos at 6 minutes or less – the less the better.

Should you give learners control of video? Yes. In fact giving them 'chapter' points beyond the usual forward, back and pause controls proves useful, as it matches the structure of the learning experience Zhang (2006). 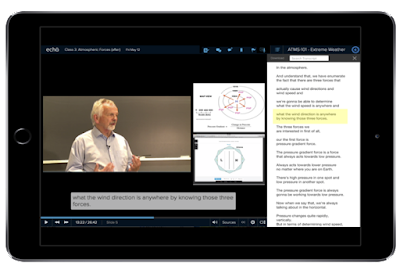 It is vital to reduce cognitive load in video. Mayer (2003) and others have shown that text plus audio plus video on the screen, commonly seen in lecture capture, actually inhibits learning. Don’t put captions, text or scripts on the screen while the narrator or person on the screen is talking. One exception to this (rules are there to be broken) is in language learning, where the ability to jump from voice to text can prove useful. Also avoid complex backgrounds and background music, as they also inhibit learning Brahme (2016).

Talking heads or not? 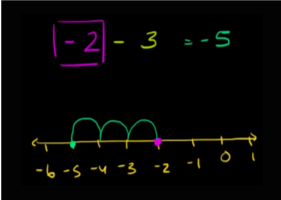 This comes as a bit of shock to many but talking heads, that staple of lecture capture and MOOCs, is often not such a great idea. It can be useful if the person is a respected and well-known expert and there is evidence that the mere knowledge of them as famous experts increases retention and there is a social learning effect. Inspirational talks, well-delivered with emotional impact can also work as do short introductions, links and goodbyes, to take advantage of the social effect. But there is nothing worse, in terms of learning that an autocued talking head, mechanically delivering a scripted piece to camera in the expectation that people will remember what he or she has said – they won’t Chaohua (2019). Fiorrella and Mayer (2018). We have ample evidence for this in the Khan Academy where you don’t see Salmon Khan’s face, only the working through of examples or images. Cognitively, the face is often just noise, what you want to see is the actual maths, with the hand drawing and writing on screen. For subjects that are semantically rich, getting rid of the face is a good thing as it reduces cognitive load. Social cueing does seem to work, for example, at start and end of lesson and, of course, for subjects where visuals are less useful - story-telling, philosophy and so on.

Avoid over-formal, TV-news like presentation from autocue. The evidence suggests that  informal is good, enthusiastic is good, personal ‘I’ ‘you’ ‘your’ is good. Speaking between 185–254 words per minute seems to be optimal and no background music Mayer (2008), Brahme (2006). 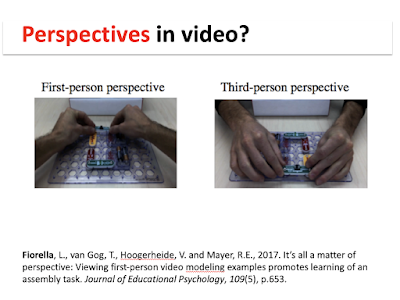 When showing the manipulation of objects by hand or, in general, procedures and processes, video shot from the perspective of the learner, is better that third-person viewpoints. This may upset traditional Directors but it means that you get cognitive congruence Florella (2017).

How does image size affect learning? 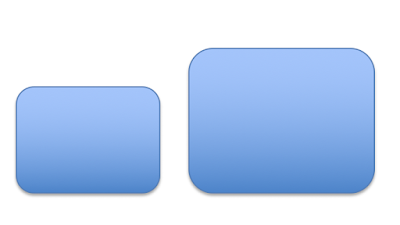 This should worry those whose video as a great medium on smartphones. The smaller the screen the less you learn. Or the larger the screen the more you learn. Nass and Reeves (1996) showed 60 video segments to 125 adults on different screen sizes and tested them a week later. Those that had watched the larger screen remembered “significantly more”.

How does video quality affect learning?

Video quality doesn’t appear to matter as much as audio quality. That’s because our vision has evolved to cope with twilight, different light conditions and so on. Our hearing, on the other hand, is designed for close proximity speech Nass and reeves (1996). Their research showed that on attention, memory and evaluation, video quality had “no psychological advantages” whereas audio quality was critical.

How do video cuts and pace affect learning?

Cuts raise attention, about 1 sec after the cut but too many cuts lowers attention
So be measured with cuts and make sure they match the ‘need to know’ learning objectives. It is worth going at a slower pace with cuts, as the learners needs to process information before it goes from working to long-term memory Nass and Reeves (1996).

Should we chunk video?

What should the relationship be between video and active learning?

This may seem obvious but it is often ignored in practice. After video the effortful learning must be very closely related to video content. A large data mining exercise showed that this is not always the case and that when the two are too loosely related it affects student attainment MacHardy (2015).

What do you do after/between video chunks?

Don’t get them to draw stuff, get them to explain what they think they’ve learnt. You can do multiple choice but this is the weakest of the techniques. Retrieving key concepts is better Szpunar (2013), Roediger (2006), Vural (2013) and typing in actual explanations, that can be semantically interpreted by AI is even better.
Wildfire uses AI to grab the transcript of the video and produce retrieval-based online learning. It does it quickly and cheaply with links to external content, making the learner type in concepts, numbers or full sentences, which are interpreted by AI.

To produce effective videos for learning we must look at learning research. That not only tells us about the cognitive basis of good learning, it also gives us sound recommendations about what we need to do to increase retention, some of it surprising and counterintuitive. You have to break some of the rules of traditional video production and directing to adjust video towards learning. Oh... and rules are there to be sometimes broken... but only with good reason.

Thanks for provide great informatic and looking beautiful blog, really nice required information & the things i never imagined and i would request, wright more blog and blog post like that for us. Thanks you once agian
chicago television studio
Midwest video production services
Chicago 4k video production

Thanks for sharing this informative blog with us. We were looking for this type of article from a few days. This is very helpful for me & for others. Otherwise if you want to know about 2021 Bucket List-https://www.youtube.com/watch?v=ephDEft_ZCg

Wales publishers are offering optimized, Best Publication Services in UK to boost the researcher and research communities, by providing accelerated and efficient services to fasten the publishing process and to give more opportunities for research on different disciplines.

The preparation we will offer you will be customized particularly for you. Angajari Videochat From the second we begin teaming up we are persuaded of your characteristics, yet in addition of the way that you are one of a kind.

videochat acasa
Many of you think that video chat is "not very ok" because of the negative news with owners of video chat studios, who have evaded taxes or who have behaved inappropriately towards their employees. castiguri So we, at Private Studio, thought of clarifying things a bit for young people who want to know everything about video chat.

You have a good point here!I totally agree with what you have said!!Thanks for sharing your views...hope more people will read this article!!!
Video Marketing Company in Islamabad

Do you need Finance? Are you looking for Finance? Are you looking for finance to enlarge your business? We help individuals and companies to obtain finance for business expanding and to setup a new business ranging any amount. Get finance at affordable interest rate of 3%, Do you need this finance for business and to clear your bills? Then send us an email now for more information contact us now via (financialserviceoffer876@gmail.com) whats-App +918929509036 Dr James Eric Finance Pvt Ltd Thanks