M-learning - from a van! 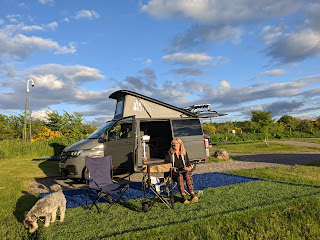 I gave talk today about 'mobile learning', working from my VW campervan in remote parts of Scotland, with mobile, hotspotted laptop, solar power on roof & storage battery. Next time, plan to give that talk, about freeing learning from tyranny of place, from my campervan.

While on the move, doing nearly 200 miles from Brighton to Cape Wrath at the extreme NW edge of Britain, we (Gil, Doug the dog and I) used a lot of tech and learned a lot.

The idea had been brewing for some time. Buy a van and get out there but it was watching Nomadland that sparked the purchase. There really is a social and demographic movement around this, especially in the US and now elsewhere. Not just the vacation van but the living and working van, a house on wheels. My young friend Lewis lives in an old, red Post Office delivery van. It was cheap and buying a house in Brighton impossible without external support. He watches no TV, reads a lot, has a community of similar friends, works when he needs to top up his funds, and sets off when he can, to Scotland, wherever. On a grassy mound behind a huge deserted beach on the northern coast of Scotland I had a long conversation with Noreen, from Northampton, who, before Covid, sold her house, bought a van and was sitting here with her beautiful alsatian, clearly at ease with the world. “My kids and mates thought I was mad…” she said, “but it’s easily the best thing I’ve ever done. I’m living, nor proving anything, not answerable to anyone, that’s the point.” Occasionally she’d go back and stay with her now grown-up kids but soon wanted to back on the road. She put me on to ‘park4free’, an app that layers free parking spots for vans on to Google maps. Her van was full of things she had made from shells and wood. She had made it her home. All she needed was fuel and food.

We did our van research online, found the van online, made the purchase with an online transfer and off we went. First trip was to Canterbury, at the end of a year-long pilgrimage to St Martins, the oldest Church in the English speaking world. We parked in the long-stay car park (recommended in Britstops, a book with free or cheap overnight stops), which was empty and had free buses running to and from the city. It was blissful and we ironed out a few things, like the right bedding, storing things so they don’t rattle and so on. Then the big one - up to Scotland and the N500, 500 miles of stunning landscape. We checked the weather runes, the van was made ready, and off we went. Doug the dog loved it. The van was his den and he was with his family. He ran on deserted beaches and barked happily, without rebuke. A dog and a van are a perfect match.

Just a bit about the van comms. It has, on the dashboard, a screen that can be paired with your mobile, so satnav and calls can be made through the speaker system in the car. My front seat was incredibly comfortable and can be rotated 180 degrees to face back into the van. There’s a table inside the van. So the van becomes a mobile office, kitchen, dining lounge and bedroom. On the roof is a long solar panel that powers the lighting, fridge and water pump. You can also charge your mobiles and iPad from this 12V source. It never runs out. Powering a laptop requires more punch but OK if you’re hooked up in a campsite or have a storage battery.

Comms, either through wifi you find when you’re parked up (in Ullapool they had a town wifi service) or through your mobile as a hotspot, was fine. To be honest, for meetings, the mobile with 4G was adequate, even, as we found, at the very top of Ben Nevis. I managed to participate in board meetings (one, in a good way, the most important in the company’s history), gave talks at online conferences, made and took calls. It was all rather easy.

Google maps was, of course, invaluable, as was the app ‘park4free’. If we did need a campsite, you could find one and book it online. The history (clearances, Culloden, U-boats etc), geology (3 billion year old rocks and astounding formations), flora (wild flowers and orchids galore) and fauna (seals, deer, raptors, puffins, even a snow bunting in the snow at the top of Ben Nevis) were all available, in depth, online. Photography’s my hobby and I could load up and post images throughout the entire trip. I can honestly say that it was both exhilarating and satisfying. I haven’t felt this free and happy for a long time. Sure it was partly an escape from the straightjacket of Covid but it was more than this. It was a glimpse into another way of living, free from the trappings and tyranny of a fixed location. Every day gives you new perspectives. Everyone we met seemed happy, talkative, helpful. It was as much of a community as any fixed place.

‘Autonomy’ is the word I’d use. The freedom of being on the move. It opens and stimulates the mind. You walk more, think more and if you want to focus on a topic, it allows you to take a deep dive, as you have the time to take the leap. You just find yourself thinking at a deeper level. We downloaded a motherload of Netflix stuff and podcasts but, to be honest, the real world was so spectacular and we did so much that we barely watched anything on a screen. I drifted into reading and writing more and was just as functional, if not more productive, as I was at home.

It’s not that we should all be living and working from vans. But that’s a real option, I think, for the young and maybe half and fully retired. The lesson is that learning, real mobile learning, can free itself from the tyranny of the clock and place. Most learning is asynchronous, done in your own time with you in control. Learning is a process not a live event and the idea of having to turn up for umpteen lectures per week (40% dont turn up anyway, even though they’ve paid), is an anachronism. It is certain that more people will be working from home post-Covid. Gardner predicts that 80-% of classroom training in the workplace will disappear. Young people will almost invariably learn this way in the workplace. Mobile learning turns out not to be learning from your phone, it is learning anything, anytime, anywhere.