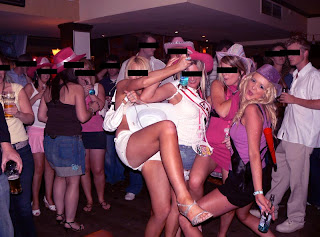 C-shock
New student in the UK? This mobile phone game from the University of Portsmouth introduces you to British life with scenes from pubs, scenes of public affection and other strange British habits.

C-shock (wonder if they thought carefully enough about this name!) is a sort of e-mother for overseas students. You rate the scenes you see on a ‘culture-shock’ scale from 1-100.

Spot a pack of half-dressed women swaying like MFI wardrobes, wearing pink stetsons, drinking luninescent liquids straight from the bottle, while eating kebabs? Don't worry it's only a pre-nuptial wedding celebration. There’s also a map of the campus and some tasks to complete. Nice idea, I think.

Induction/Orientation – before, during and after
This is an interesting application for m-learning. Induction is too often a ‘corporate dump’ of information. Sending out stuff to a new starter’s mobile, even if it’s only a txt message, is ideal. People want to know about their new organisation before they join. That’s when they’re at their most curious.

Then, when they arrive, a series of real tasks can be linked to a ‘journey’ mapped out on their phone. They have the added advantage of being able to phone people, such as the bank, for appointments. Social stuff, like meeting like-minded people could also be added.

Once installed valuable contact numbers, websites and other information is then stored for future use. Induction/orientation is, after all, an on-going series of tasks.