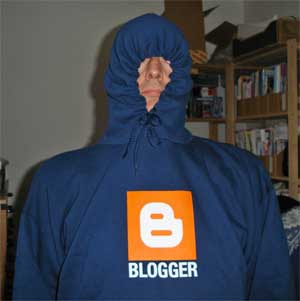 Electronic hoodies
Big blogosphere debate on whether anonymity and vitriol damage blogs. My own view, having had my fair share of anonymous comments (usually from people working for the BBC!), even a rather strange blog stalker, is that they’re clearly harmless males from the gutter of geek culture. Why put the views of 71 million bloggers at risk, especially those who are expressing themselves within the context of a politically hostile environment, because of the actions of a few juvenile, electronically-hooded idiots?

Anonymous incorporated
Neither do I really have a problem with anonymity. There may be times when you don’t want your employer, government or other agency find out who you are. It’s also easy for people without blogger accounts to simply click that button. I rather like the robust comments, even the vitriol!

Gutter geeks
If we want freedom of expression we need to take the rough with the smooth. Let me give a personal example. Typical of the timid, geek critics is Daniel Raven, rich-kid partner of the wonderful Julie Burchill. Riding on the coat-tails of Burchill, whose essays in the book are superb, this singularly untalented writer has a chapter on new media in HER latest book, where he has a relentless go at me, and the industry he has worked in for years. The story is as tedious as his writing, and for some reason he calls me ‘Charlie’. While berating his fellow workers as ‘tossers’ and hating their ‘showing off about DJing’ (he is exactly one of those himself and pens another tedious essay on local Brighton bands later in the same book), he is typical of these powerless, geeky kids who like to have a go, but not to your face. "Anyone who's lived in Brighton longer than five minutes will tell you that what this town really needs is more plumbers," he says (but the little darling wouldn’t possibly consider being one himself – which is probably why he works in the very company he berates). However, at least he put his name to the diatribe. The point of the story is that there will always be remnants at the end of every group who are a bit inadequate in real life but use media when they want to appear brave. Fortunately, the anonymous posters and gutter geeks are all too obvious, easily spotted and easily ignored.

Me and Jerry Springer
I have also received letters and vitriol from fundamentalist Christians, who objected to me, as a board member of the Brighton Dome and Festival, agreeing with the decision to show ‘Jerry Springer the Opera’. In a debate for all parties after it was shown, you had to be there to feel the full force of their irrational wrath. Everyone on the room who was not of their ilk was lambasted as ‘Going to hell’. However, they have a right to protest, write to Board members and express their views. In this case it showed them to be the fanatics they are.

The internet is truly a bottom up medium and we need to resist those who want to see it as some sort of sterile, newspaper letters' page.

I think its very telling that you are reduced to ad hominem attacks on Mr Raven, rather than trying to refute his points.

Hi anonymous!
So Raven's 'personal' attacks based on things that happened six years ago are not 'ad hominen'? before you use latin phrases you should check your sources and its meaning. I'm quite prepared to match 'ad hominen' with 'ad hominen'.

What's ad hominen about quotes taken straight from the book - they're his observations about his fellow workers and his current employer, not mine.

And for the 'non-ad hominem' record, the whole episode was engineered by someone who was sacked for cocaine addiction and the theft of money and computer equipment from the company, in the presence of his rather baffled GPMU union representative (a union that no longer exists, due to falling membership).

And there was I thinking that the unionization issue was one caused by a batch of botched streamlining sackings, general malcontent at working conditions, and the fact that Epic was being sold, and unionization would have negativly impacted upon the shareprice.

But I guess I was wrong, it was all down to a lone cokehead. Possibly hiding behind a grassy knoll just outside epic.

Hi, Donald - thanks for the feedback! Unfortunately I can restrain myself no longer from correcting a no-doubt-wholly-accidental error in your original diatribe. You suggest that I said all my fellow workers are 'tossers'; what I actually said was 'my years as a mouse jockey have brought me into contact with some of the nicest, most interesting people you could ever hope to meet. Others, though, are simply tossers.' Epic's a big place and I've been there seven years; it would have been weird indeed if, in all that time, I hadn't met a single person I disliked. Not all of us are lucky enough to be blessed with your sunny disposition!
You might also be interested to learn that I had every intention of naming you in the book, but Virgin's lawyers said I wasn't allowed to. Sorry if you feel this has deprived you of your day in the sun - perhaps it's something we can rectify in the second edition?

More in sorrow than in anger,
D.R.

Daniel, Daniel – what took you so long!

So your pieces are not ‘diatribes’? As you say, you did call them ‘tossers’ (sorry for not mentioning that you only meant ‘some’ of them). What you’re not mentioning are the pages of smug, condescending and detailed descriptions of the behaviour of your colleagues; their haircuts, dress, holidays, emails, interests, what they do for a living etc. To be more precise you describe your colleagues as, ‘middle-class, university-educated oatmeal gobblers’.

And sorry if I can’t take your no-doubt-wholly-original defence of ‘chavs’ quite seriously. (I wonder where you got those ideas from?)

One thing genuinely puzzles me. If you hate the work so much (that’s another of your diatribes), why work there for seven years?

PS
I’m sure you took legal advice from your Virgin lawyer before posting this correction? Or maybe the law’s not your strong point.

More in fun than in anger,
Charlie

Don -
I never said there was anything wrong with a good diatribe - or 'middle-class, university-educated oatmeal gobblers', for that matter. I myself am middle-class, university educated, and not averse to the occasional bowl of porage... What I was trying to get across is that people with similar backgrounds to mine (and I'd dare to presume that the majority of new media workers fit that description) have not, until recently, been famous for their social snobbery. And yes, Julie and I happen to agree about this (though not about most things, politically speaking) - why on earth would that shock you? Don't you EVER agree with your wife?
As for why I continue to work in the industry, there's a clue in the text: specifically the bit that says 'at the end of the day it's no worse than most jobs, and better than plenty'. Not only that, the flexibility of my working hours means I can take time off to say mean things about YOU whenever the opportunity arises!
NO idea what you're trying to get at with that 'PS'. When did I say I knew anything about the law? I was just trying to ask whether you'd be OK with us using your real name in any future edition of the book - a genuine enquiry, to which I'd still like an answer!
Hoping you are well,
D.R.
P.S: aren't you going to reply to what 'anonymous' said?

OK, let’s trade diatribes! But why hide behind the covers of your wife’s book? Why didn’t you say what you said in the book to my face? You had six long years to get it off your chest. Even better, come up and see me some time. You can give me a personal reading! Or am I right in thinking that you’d be a little ‘mouse-like’ when it comes to a verbal diatribe?

And don’t backtrack with all that ‘I didn’t really mean to bad mouth my colleagues guff’, and ‘I only really meant to say that some of them are tossers’. If you want to name me in your book, name the people you think are tossers, name the people whose habits you despise and described in detail. Why not go the whole hog? Publish all of their names here on the blog.

As for the “it’s no worse than most jobs, better than plenty”, your actual words describing the work at the company are, and I quote, “the hellborn inanity of what they do for a living”. The company has been in Brighton for over twenty years providing employment for hundreds of people. Many have gone on to start up similar businesses, and on to careers which they enjoy. The fact that you married a writer doesn’t give YOU the right to be ‘mean’ to anyone Daniel. Your article was mean-spirited, especially towards the people you work with but also to those who worked hard to build the company. No one asked you to be grateful, but no one asked to be personally abusive.

And let me explain the law thing step-by-step, so that you can test each sentence one-by-one.

1. Your publisher’s lawyer forces you to avoid naming me to avoid breaking the law.
2. You agree, and don’t name me in the book, calling me ‘Charlie’.
3. You then publish a public statement on the internet for all to see, naming me.
4. Ergo, you’ve decided to ignore your lawyer’s advice.
5. Hence my point about you not knowing much about the law.

PS
You say in the book that your colleagues, “pay scant regard to grammar or spelling”. Well Daniel, it’s ‘porridge’ not ‘porage’ (just as there’s two ‘s’s in ‘tosser’).

Hope you’re enjoying the “hellborn inanity” of your job.

Porage is a Scottish brand of porridge. Maybe you should do more research before making critical comments. xx

My stalker returns - as a pedant! I am Scottish - believe me, we spell porridge as porridge.

Porage is a brand (owned by Pepsico) you dolt. It's highly likely that Daniel Raven's reading comes from the back of cereal packets, but even he would capitalise a brand, if indeed he knew what you were on about.

You really do put a lot of detailed work into this - it'slike watching a boxer take air swings - keep em coming.