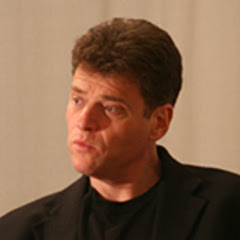 ‘Monkeys, idiots and the inane’
Keen claimed that the web has been taken over by 14 year olds and amateurs, or in his own words “monkeys, idiots and the inane”. Hold on Andrew, this sounds dangerously fascistic, bad news in a conference. I hadn’t planned to attack him but it sort of came to me when I was talking about Google. Anyone who sees Google, Wikipedia and blogging as three great evils, is chasing the wrong devils. There’s a debate here but there are other better thinkers than Keen in this area. Lanier’s Digital Maoism ideas are far more interesting and the detailed debate on blogs around quality content, spawned by the success of Wikipedia, is far more sophisticated.

Search and research
Unfortunately, Keen is not the debating sort. In my view there’s a great awareness among web users of the difference between ‘search’ and ‘research’. This is well covered in the education system and young people quickly learn to spot the difference. However, Keen served his purpose – he made everyone think a little.

I was at the conference as well Donald and has the misfortune to hear Keen speak. I genuinely do not know what the man was doing there - it was like having a conference for vegetarians and asking a butcher to give the key note speech.

A couple of quick observations about Keen...

1. Keen was a great pains to state 'I am not a luddite'. He's quite right - he isn't a luddite. He's something else entirely: an insufferable snob. His entire rant (and it was a rant) was devoid of any substantive reference, research or data and stank of personal gripes. I couldn't help but think that his ceaseless mockery of Google's usage of the 'wisdom of crowds' was borne not of academic insight but rather infantile rage that he didn't think of it himself.

2. The 'truth'. Keen seemed to have a singular obsession with the 'truth'. If the 20th century taught us anything, it revealed that in every area of human endeavour, there is no such thing as the 'truth'. From art, to literature to quantum physics, we have moved from top-down, 19th century Anglo-Prussian models of a depostic educator telling his students what the 'truth' is, to a world of facilitated learning and open-discussion of ideas and differing thoughts. This revolution in human thinking seems to have evaded Keen completely.

3. Fundametalism. You made the point that Keen was dangerously fascistic - and he was. His insistence on the value of 'expertise' (a laughable concept in my mind) smacked of just the narrow minded, ignorant, backward-looking idiocy that facilitates fundamentalist thinking - where narratives of a singular 'truth' can accomodate a world-view where it's okay to demand a woman's decapitation because she gave a teddy bear the wrong name.

The American writer Robert Anton Wilson noted that one of the most wonderful aspects of the web was the fact that you always get multiple definitions of any one thing - forcing people to recongise each other's 'reality tunnels' and admit that others can beg to differ. Thank God for that.

Keen's talk was embarrasing, smug, pretentious, wilfully ignorant and was delieverd in the most breathtakingly arrogant fashion. More than anything else I was reminded of Richard Dawkins: an intelligent, articulate man with fascinating things to say but who does so in such a heavy-handed, right-wing manner that he fails to get his point across and only succeeds in enraging people.