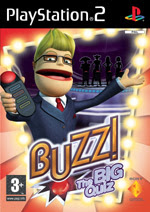 When Australia's top tennis player, Casey Dellacqua, was asked what she did for pre-match concentration, after thrashing world champion Amelie Mauresmo, she said, ‘I played Buzz’. This is the strangely addictive quiz show game for the PS2. There are trivia, music, sports and versions, packaged with four ‘buzzers’ and it’s from a publisher – Relentless Software.

Enthralling in the classroom
But the version I was interested in was the ‘schools’ version. I chaired a Serious Games event and saw a wonderful video of kids in a primary school being absolutely enthralled, excited and educated using this wonderful little game. No teacher or parent could possibly watch this video and not want to get this into the classroom imme

Teacher control
The KS2 versions covers the curriculum with questions on Maths, English, Science, History and Geography. It can be played in various modes and has some teacher features. The level of control is quite sophisticated, For example, if you wish to drill down in English, you can present quizzes on specific topics, such as words, sentences, punctuation or books.

No 2 Playstation game
Apart from the odd, Daily ‘hate’ Mail stories, complaining about games being introduced into schools, where they quote religious fanatic and all-round fascist, Jack Thompson (read the profile of this sleazebag on Wikipedia), the game has received great reviews, reaching number 2 in the Playstation charts.

More coming
Look out for the PS3 version, later in the year, with a feature to create your own quizzes. Now that’s an idea that should excite teachers.

I saw this demonstrated at BETT - really interesting. I'm currently writing about a school for the deaf that is using PSPs very successfully with the children - though as a way of keeping video diaries rather than for games. But I think there's a huge potential market here for educational software for the PSP, don't you? I wonder if the vendors have cottoned onto it yet.

the main problem with the PSP is that the UMD format is expensive to produce although as long as the memory stick size allows, alternative storage is possible but then you have to allow for the fact that PSPs come with either no memory stick or 32Mb only so severely limited.