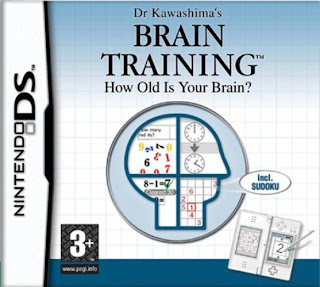 e-learning goes global
Over Christmas something quite extraordinary happened. E-learning became a global consumer phenomenon. Nintendo has been THE global success in games this year with learning product. So how did Nintendo do what educators have been trying for eons to achieve (unsuccessfully)? Simple, they went back to some basic principles in the psychology of learning around motivation, goals and spaced practice. They realised that one-on-one content, that becomes addictive for the learner, played a little but often, is the way ahead in learning. In designing a game that appeals to all ages they’ve literally created a massive consumer-led e-learning market.

ng stimulates your brain and helps train mental awareness and your long-term memory by being used for a few minutes each day, through a series of quick but challenging exercises designed to energise the brain. It is spot on in terms of the psychology of learning in terms of motivation and spaced practice.

There's some pretty nifty literacy product with My Word (16,500 words and definitions using the Official Cambridge Dictionary). Puts you to the test on spelling and understanding adjusting to your improving vocabulary level. You can pit your literary wits against others in your family but, again its main advantage is this view that language needs that slow drip of practice to result in real improvement. Why every primary school doesn't use this stuff is beyond me. To rely on one teacher in a class of 2530 kids for real improvement in vocabulary is madness.

For French, German and Spanish there's e-learning with 10,000 words and 400 phrases, including pronunciation test using the built-in DS microphone. This is interesting because it can test your pronunciation - a real breakthrough. At the risk of boring you, how cool is this as a way of learning a language - gradual practice, games and the ability to speak and be understood. Compare this to the standard classroom French - 3o unmotivated kids mostly lost, who after a few years of classroom French couldn't order a baguette.
Scottish schools study
A project in primary schools in Scotland has shown that these handheld games can significantly enhance learner performance in mental maths as well as having a positive impact on other aspects of classroom life. Three Primary 6 classes took part in a project to show how computer games can impact on and enhance learning in classrooms in a ‘practical, accessible and manageable way’ Watch the excellent video here.
Brain training 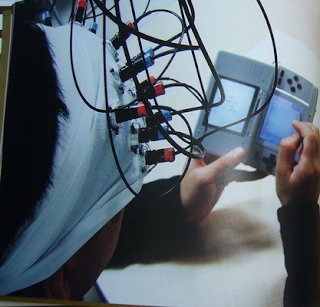 and brain science
Brain Training had interesting origins. Most commentators though the DS console would fail. Atsushi Asada, a board member of Nintendo, wanted games to reach out to people of all ages. Nintendo had already developed handwriting and voice recognition for the DS and after meeting Professor Kawashima of ’s Centre for Collaborative Research on Future Technology, and wiring himself up to measure the increased blood flow to his brain Asada set up a team of 9 people who completed the project in just 90 days. At first the retailers didn’t want anything to do with the product, but a clever sales campaign made them to play it for fifteen minutes; this did the trick.
More on its way 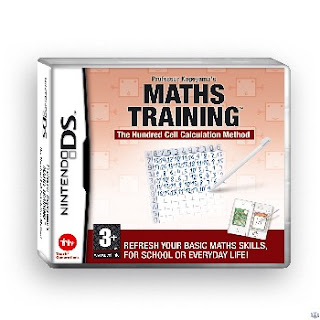 Professor Kawashima’s Maths Training title is about to be released. This has grids of problems and teh same games driven approach to learning - little and often. We can expect a massive interest in educational games and learning in the coming years. Others are playing around in the market, for example, Buzz for the Playstation 2.
I’ve been involved with a company called Caspian Learning here in the who are unique in having a 3D ‘games and learning’ engine that allows such games to be developed quickly. We’re working on a raft of games in learning projects for education and training (corporates and government departments). You really do get that 'buzz' in e-learning when you're in these games, in a way that the traditional flat e-learning doesn't often deliver. I have absolutely no doubt about this being a huge boost for learning and e-learning over the next few years.
Some boring but astonishing numbers
Worldwide Nintendo DS has sold 64.79 million units, and the Wii 20.13 million. In the , Nintendo DS was the best selling hardware of any kind (home console or handheld) in 2007 and now has a installed base of over five million units. The Wii was has an installed base of over 2 million units, surpassing the installed base of Microsoft’s Xbox 360. Combined sales of both of Nintendo’s Dr. Kawashima Brain Training titles in the have now passed two and a half million units and were the top two selling software titles of 2007.
at January 24, 2008

Saw your presentation at Online-Educa in December. Brilliant stuff :).

I work for a smallish e-learning company i Denmark. We have made a habit of giving our employees game consoles for Christmas to inspire them to think about out to improve e-learning thru use of game technology and methodology. 2006 they all got a Nintendo DS. 2007 it was a Nintendo Wii. It has created a great buzz in the company :)

My question is: Has anyone out there seen or developed (corporate) learning content for the Nintendo Wii?
I believe that the interaction devices (the remote + nunchuc) are brilliant devices to bring the interaction between user and e-learning to a new level.

Donald, this was one of my main points at my conference session at Online Educa. Nintendo really have moved interactive entertainment and education on to a new and wider audience.

You should add to your list Cooking Mama - a cooking simulator on the DS which successfully enabled my ten year old daughter to cook us fish cakes having practiced the recipe virtually.

Also - in the interests of balance, did you see the recent claims by Sense about Science? I wrote about it here:

I've become a Word Coach fan too after my wife recently bought a Nintendo DS, although not so convinced about the Cambridge Dictionary; is that Cambridge in Massachusetts then as there seem to be a lot of 'Americanisms'. Incidentally, she actually bought me a PS3 for xmas but I spend more time 'borrowing' her DS instead. Hurrah for simple but addictive educational gaming. It's like 'low fat gaming' - I can justify it as it's good for me...

One other point, isn't it interesting how we are willing to accept lower quality graphics for games that makes us think? I'm definitely no psychologist but does this mean our brains are willing to lower the visual benchmark when they are suitably (and constantly engaged) as opposed to something less cognitively draining, therefore meaning the grey matter thirsts for another form of engagement, i.e. sexy visuals?

Although Brain Training was actually big at Christmas 2006, as well as this year, the Nintendo Wii opens much more possibilities with the simple fact that the internet browser "channel" can be downloaded for free / minimal cost, enabling users to access already present online material through the Wiimote, or further expand the interaction possibilities. Case in point: http://www.cs.cmu.edu/~johnny/projects/wii/

I think there is a fundamental flaw with all these games (and all other existing educational games).

The content here in these games consists of arithmetic and word puzzles akin to crosswords and Sudoku puzzles. If you play long enough you will certainly get getter at these puzzles but is this really useful? Students playing World of Warcraft similarly get better playing at World of Warcraft. They have learned something but is it educational?

The problem is that the vast majority of (perhaps all?) things we consider worth teaching don't lend themselves to this game/puzzle format. That's why truly educational games are very few and far between and educational game enthusiasts are yet to make any significant headway.

re: Jens
i think the wii will be the next big thing for eLearning. The Wii is bringing gamers and non-gamers alike to the table. Wiiware will pave the way for learning companies to start providing training on the Wii.

The tactile nature of the Wii combined with its ability to build genuine excitement in a user could take eLearning to the next level. (perhaps i'm overly optimistic)

I found your post while searching for a German language coach for nintendo DS.

Until now I was unable to find the German coach. (English and French and I think I saw Italian too)

Is it really available now? Where could I buy it? On amazon there is no German language game available for DS.
I need it for my boyfriend to improve his German :)


This is a great guide to get you started with the R4DS. It's a great bit of kit. You can find out most stuff by using http://r4revolutions.blogspot.com As mentioned in the video though please dont ask for requests becuase this is not my DS and i never intend on getting on either..

Thats a very interesting post. I have been inspired. Thanks.

You've got a good point right there. It can be hard for teachers to look after the improvement of each student's vocabulary. They really need help from softwares like WordSmart. I've heard from my neighbor that his son's reading habits improved since he bought the software. Even he got confused why there are Wordsmart complaints while he and his son are enjoying every bit of the program. He proved that kids' free time can be productive because his son plays and learns at the same time. So I guess people shouldn't believe in that WordSmart scam issue. They should expose their kids to computer programs that feed their children's minds.

Great suggestions, by the way! I'm gonna check them out, too.