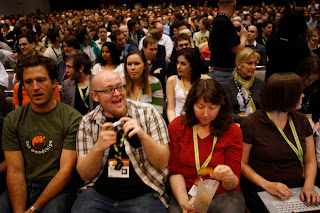 Free-for-all
We're only halfway through the SXSW Interactive conference and 23 year old billionaire, Mark Zuckerberg (CEO Facebook), in a keynote interview, was heckled mercilessly as the interviewer asked a series of banal questions, received equally dull answers and then started to plug her own book. It started to happen half way through the interview when someone shouted, ‘Talk about something interesting,’ a sentiment that was met with waves of cheering and applause. In the end the interviewer had to turn the questions over to the audience, who then took over. The whole event descended (or ascended) into a free-for-all.

Revolt during dull panel
During one particularly dull panel ‘Social Marketing Strategies Metrics, Where Are They?’ the audience used a chat room to plan their revolt. As one chat room poster remarked – ‘Shit…we are the panel!’ The group did a synchronised hand raise, took off articles of clothing and coughed every time the words ‘Social Media’ were uttered. The chat room comments were also fed into the discussion via questions.

Audience demand participation
The revolt says volumes about this generation’s attitude towards old methods of learning. Many in the 500 audience were micro-blogging and in chat rooms during sessions, complaining about being bored, so they suggested mob heckling, and eventually the audience took over. They’re tired of the old format and demand participation. It’s no longer acceptable to bore the audience or ask sycophantic questions. Sessions are being blogged ad reviewed as they happen and conference organisers must weave this into the event.

More passion, fun and controversy
Speakers need more passion, more fun and more controversy. Why attend a conference to hear things you already know? I've had pains in my chest with boredon at conferences. It should be about the new and interesting.

More heckling
I recently saw Steve Rayson of Kineo being heckled mercilessly at Learning Technologies. He deserved it, as he was exaggerating points as part of a sales pitch. He also handled it well, making the session the talking point of the conference. I fact it was merely a floor show in the exhibition, not part of the main conference at all. More heckling I say – it’s god for the audience and the speakers.

Less corporate crud
Corporate speakers need to cut out the crappy company intros, where they list the number of employees, countries in which they operate and all that nonsense. The big corporates are the worst culprits – IBM, Microsoft, Oracle etc. They’re so keen to show us how big their cahonas are, that they squeeze the life out of the presentation. We all know what you do – get on with it!

Oh, I almost forgot, this wasn’t the only innovation at SXSW. They had Lou Reed as the main Keynote!

Lou Reed, eh...? Didn't he put out one of the greatest albums of the 70' (1972, to be precise), and wasn't it called 'Transformer'? And weren't there tracks on it like 'Vicious', 'Perfect Day', 'I'm so Free' and the incomparable 'Walk on the Wild Side'...? And am I allowed to savour this sweet irony, given the disruptive (revolting?) nature of SXSW...!