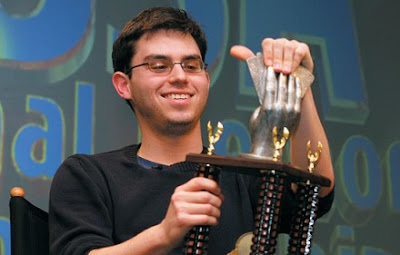 Just finished a fantastically readable book on memory, Moonwalking with Einstein – The Art and Science of Remembering Everything by Joshua Foer. In addition to scotching the usual myths about photographic memories, it’s a fine introduction to how important memory is, along with the techniques, which anyone can learn, to improve their memories. Foer takes up the challenge of entering the US memory Championships, ends up the winner, and the book is the story of that journey. But the weirdest episode in the book is his encounter with the eccentric Tony Buzan.

I’ve always been suspicious of Buzan’s hyperbolic claims and the fact that his books seem like an endless series of re-treads, so it was satisfying to read that an expert on memory, and others, had similar, if not harsher opinions.

Brain is not a muscle

Foer clearly dislikes the ’brain is like a muscle’ analogy that Buzan trots out, “Buzan’s most hyperbolic claims about the collateral effect of ‘brain exercise’ should inspire a measured dose (at least) of scepticism.” Foer is not alone. Ed Cooke, an English memory grand master, has similar views, “Ah, yes the estimable Tony Buzan. Did he try to sell you that nonsense about the brain being a muscle?...Anyone who knows the first thing about the respective characteristics of brains knows how risible that analogy is.” To be fair, it’s only an analogy, that suggests that practice improves memory, which it does, so I’d let him off on that one.

Foer also thinks that Buzan takes the “self-styled guru” thing too far, “he seems to cultivate the sense of aloofness and inaccessibility that are a prerequisite for any self-respecting guru”. But it’s the interview that’s most telling. Buzan is half an hour late for the interview (maybe he forgot the time) and Foer damns him with faint praise, “Everything about Buzan gives the strong impression of someone wanting to make a strong impression”. Buzan often reminds Foer that he is a modern Renaissance man but all Foer finds is “Buzan’s tidy little narrative”.

When he asked Buzan’s chauffeur (he drives around in an ivory coloured 1930s taxicab) about his boss’s books, the guy's caught off guard and says, “Same meat, different gravy”, and Foer clearly agrees that across 120 books there’s oodles of repetition. Indeed, the competitive memory community contains a great number of people who think he has “gotten rich peddling unscientific ideas about the brain” and that he’s, “a bit of an embarrassment”.

He gives Mindmaps an endorsement but rejects Buzan’s claim that they’re the “ultimate mind-power tool” or a “revolutionary system”. I agree with Foer here. I don’t use mind maps, as they tend to limit the way I think, which is more language based than visual. But, like Foer, I agree than the increased ‘mindfulness’ and focus that mind-mapping brings can be useful.

Foer’s book is a rollicking tale of someone with an average memory, who simply set out to show that it can be massively productive through training, and engages with the serious science of memory, along with it’s role in a person’s character, life and learning. If you don’t like the pure science, it’s a wonderful introduction to how the mind and memory works.

Another book I’d recommend along the same lines is Embrace the Wide Sky by Daniel Tammett which I’ve reviewed in this blog.

I'm really enjoying this book, and learning a lot as I go. Thanks for the tip, Donald.

It's a fun and informative read.

I think we learning professionals need tom know a great deal more about 'memory' and not Maslow and the other tosh that's bandied about in train the trainer courses.

It is a great read Donald: thanks

just listened to the audio book whilst painting and now inspired to create palaces to house the history of art!