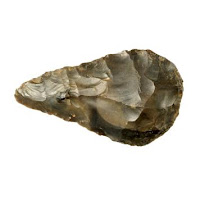 Great stuff! I covet that gorgeous flint axe of yours – makes me want to get out and find one of my own.

I see you refer to Mithen. I just read his paper entitled “The Evolution of Imagination”. I highly recommend it. It’s a fascinating and, to my mind, very plausible explanation for the vast flowering of culture over the last 50,000 years and why the technology of axes, like yours, were so comparatively slow to develop.

Looking forward to your next instalment.

Donald. Thanks for writing these. Concerning Savants not Savages and Pre-Linguistic Minds, I'd always assumed that human cultures back to 10s of thousands of years before the cave paintings at Altamira and Lascaux had fully developed languages. Is that not the case? Seb