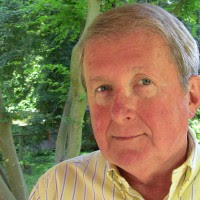 Jay Cross has been credited with inventing the term ’e-learning’ and continues to be a pioneer in both the practice and theory of technology in learning. After developing the first courses on the hugely successful University of Phoenix, he set up the Internet Time Group. A tireless thinker and presenter on learning, he has pushed the learning world to think seriously about informal learning, and working smarter.
Informal learning
Workflow learning ties learning into the actual workflow within an organisation. According to Cross it takes us to support and on-demand services that are designed to exist within the real tasks we do in our everyday work.Out of this work on workflow learning came an even wider, and what he regards as more important set of reflections.
Averse to detailed semantic analysis, he compares the difference between formal and informal learning to the difference between taking a trip on a bus and driving your car. In the former, you’re on a set route and not in the driving seat, in the latter you go where you want, when you want and on the route you choose. His reflections on the failure of training to really recognise informal learning is well represented in his oft-used ‘spending paradox’ slide. 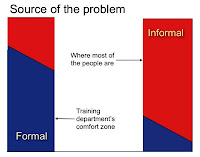 Cross is often ahead of his time and with one simple, diagram, he opened our eyes up to the fact that most learning is informal yet almost all the spend is on formal courses.
He invites us to think about learning in a more naturalistic way, seeing learners as real people in real organisations who use real tools in real networks, both offline and online. Informal learning is driven by conversations, communities of practice, context, reinforcement through practice and now social media to “optimise organisational performance”. Blogs, wikis, podcasts, peer-to-peer sharing, aggregators, social media and personal knowledge management are all emergent phenomena, unlike the top-down tools and content that traditional e-learning has provided. When we look at the internet we see powerful tools and techniques emerge through genuine use. It is these, he believes, that point us towards success in learning.
Formal still matters
Note that he has never claimed that formal learning should be abandoned, only that informal learning needs to be recognised and supported. There’s still a need for underpinning learning with good content, from books to full courses, especially for novices and business critical training such as compliance. You can’t let people who don’t know what they need to know, drift, so there’s a time and place for structured, formal learning. Cross simply wants us to also identify and use natural pathways, the unofficial, unscheduled events that take place in real contexts. For cross this is underpinned by personal, intrinsic motivation.
Business focus
Cross has all the charm of a Berkley liberal but when it comes to training he has bite. What matters is execution and performance, real business objectives and metrics ”if it doesn’t make business sense, don’t do it”. He agrees with Roger Schank that “training is really schooling” and therefore “often superficial, boring and, irrelevant” and “as not reinforced by doing often forgotten”.
Rather than an unbalanced focus on top-down classes, tests and certificates, networked learning organizations need blends of workplace learning that include the experiential, unplanned, and informal. This has to be done systematically and not left to chance, which is where ‘Working smarter’ steps in.
Working Smarter
Informal learning is not some vague from of drift with chance encounters. You need to take control of your own learning and organisations need to inseminate and stimulate communities of practice. What gave Cross’s theories a boost was the explosion of social media that provided communication through blogging, facebooking and tweeting, as well as media sharing through YouTube, Slideshare and so on. It’s fast, cheap and ubiquitous so “connectivity has undoubtedly shifted the 80%/20% ratio of informal to formal learning; it’s probably closer to 95%/5% these days.”
Push and pull
Cross is sensitive to the language of learning and rarely uses the word ‘learning’, these days as he thinks it leads to the default - schooling. Even his old distinction between formal and informal has given way to ‘push and pull’, where training is ‘push’ and learning is ‘pull’. Even ‘e-learning’ is avoided as it also leads to a default of dull, page-turning courses. Like Schank, he’s keen on a more experiential approach that doesn’t simply place content centre stage.
He is fond of the 70:20:10 model (70% experiential, 20% working with others, 10% formal instruction). The 20% he sees as driven by managers and supervisors, who push, provide feedback and coach others. It’s the part training departments rarely reach, so, “this is where the giant upside for improving learning lies”. To take advantage of the 70% learners have to learn to pull and that means learning how to search, remember, take part, create, share and communicate. This means a culture of openness and optimism that embeds learning
Far from decimating the training department, he wants to see learning as a constant in organisations, not only inside the firewall but for all part-timers, freelancers and partners. The wall between company and customers is also crumbling, creating a new culture of customer education.
Well-being
Characteristically, Cross has moved on to embrace the idea that happiness and well-being underpin business success and promote a culture of learning. The danger here is to jump on the Seligman bandwagon, just as the focus on ‘happiness’ is fading. Nevertheless, Cross is no slouch and may very well provide us with a deeper understanding of how to get learning embedded and taken up on a personal level within organisations with a subtler psychological approach. In this age of greed, corruption and alienation, we may be in need of his advice.
Conclusion
Cross has contributed much to the development of new ideas in learning and e-learning, especially in his push to get workflow and informal learning recognised as important features of the learning landscape. More than just the theory, he has actively engaged in debate and widely disseminated his ideas. Cross asks us to reflect on the obvious, but shocking, fact that almost all of our attention (and spend) goes on the formal side, while the majority of the action is informal. Much to his credit he does not abandon formal learning, but asks us to consider the accelerating role of technology in on informal learning. He moves us beyond traditional LMS and content model and beyond blended learning to a newer more naturalistic model of learning, based on real behaviour and contemporary technology. Lastly, and I say this as someone who has learnt a lot from Jay Cross, when he sees a weakness in his theories , he’s not afraid to admit he got it wrong and move on. In this sense he is a model of honesty and authenticity and exemplifies the core idea of personal development, something he has always held dear.
Bibliography
Cross J. (2004). Implementing e-Learning, ASTD
Cross J. (2006) Informal Learning, Pfeiffer
Cross J. (2011) Working Smarter Fieldbook, e-book (download)

I lke his 70:20:10 model (70% experiential, 20% working with others, 10% formal instruction). How does that fit with the current enthusiam for group work? It would seem to suggest that it is much less important than first-hand experience

Niall, working in groups is vital. In an enlightened organization, a lot of the experiential learning occurs in groups. The 20% is more about mentoring. I have just completed a white paper on this that should appear next week.

Admirable commentary. "To take advantage of the 70% learners have to learn to pull and that means learning how to search, remember, take part, create, share and communicate. This means a culture of openness and optimism that embeds learning". A critical skill I'd add is "learning how to question and critically discriminate". Perhaps that is implicit in "create" (i.e create meaning), and in "take part" (i.e bring something of yourself - your intellect - to the material you are internalising).

Everythng is fine about your blog. I love to read it again and again.

Hi Donald, I was just reading Jays article on your blog and it echo's many of the same points I'm making in an article I just wrote here. http://linkd.in/YVTiPx I'm tackling the LMS side of things, but it fits nicely with your findings. I'll be rolling out 4 more articles examining analytics, content generation and various other topics. I would love you to weigh in with your comments (critical or otherwise;).