As we drove down the small country roads to Bovingdon, we heard them first, then started to glimpse them through the trees, rearing up and down on rough tracks. Suddenly, one was coming straight at us on the road, then two more. The area was crawling with tanks and armoured vehicles. Every time we saw one we shouted – tank, tank! What a simple, solid word. 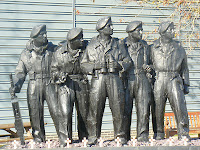 Our destination was The Tank Museum. And this is the fine statue at the entrance. I like technology, usually the smaller stuff, computers, iPads, mobile phones etc. What I wanted to know was whether my work in researching new technology, or techn-ology (the science of technology) applied to something as big, bad and brutish as tank technology.
So far, my 10 rules of techn-ology are:
Technology changes RULES 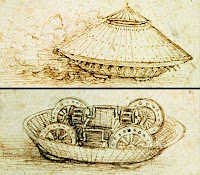 A tank is a moving, armoured vehicle with a gun. So who first invented the tank? Sure the Carthaginians, Greeks and Romans had armoured elephants but it was Leonardo da Vinci who first imagined the true tank, a circular, sloped cone with wheels that allowed it to move in any direction with a turret and gun. But it was the British at the start of the First World War who developed the first metal, tracked tank to breach German trenches. 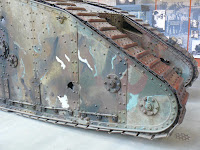 These huge, trapezoid beasts were to change the face of warfare for the next 70 years. The first tank battles were messy. More men died of carbon monoxide poisoning than enemy fire. They were noisy, smelly, hot, difficult to manoeuvre and easily captured. You can crawl inside one in the Museum and see that it really is a metal tank – like being inside a metal box with sharp angles, rivets and a huge, uncovered engine, taking up most of the space. Just a small hole to see and hand rods to steer. Eight men crews were needed for gear changing, steering and gun handling, with male tanks (big side guns) and female tanks (machine guns). The Germans were truly shaken by this new weapon and all sides in future wars were to adopt the technology as an offensive weapon. The tank played a cardinal role in the Second World War and the threat in the Cold war was tanks rolling across Europe. In the Israeli Arab wars they played a significant role as they did in the Gulf wars.
Technology has ALLURE 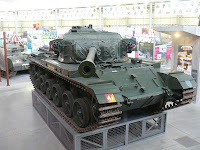 Tanks have a special allure, both admired and feared. You need only recall the screaming, screeching, banshee sound of the German tanks near the end of the film Saving Private Ryan, to appreciate the feeling of fear and awe they inspire. Later British tanks had bus engines, designed to make a huge amount of noise, just to terrify the enemy. You can tell by their potent names; Panzers, Tigers and Leopards, that these were predators. As you walk round the Tank Museum they seem dark, impenetrable and lethal – and that’s exactly what they are.
Technology coalesces PREVIOUS TECHNOLOGIES 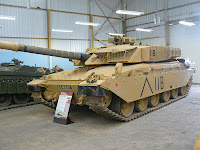 The tank is really several core technologies in one, with lots of add ons. The core technologies are the engine, gearbox, wheels, tracks, armour and gun(s). All of these had been developed in other contexts. Even now these are the essential, simple ingredients. But it’s all about payoffs. You can have great, heavy armour but you’ll need a reliable and powerful, fuel hungry engine. You can have great robust tracks but you’ll need to drive along country roads. You can have the best tank in a battle but if it’s up against many more, cheaper to manufacture tanks, you’re a gonner. So it’s all about comprimises. 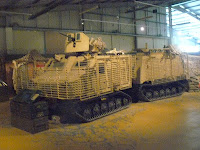 The accessories are wonders in themselves, those clusters of little tubes that eject smoke bombs to form a circle of smoke around the tank to hide behind. Challengers simply add dye to their fuel and use the exhaust smoke to do the same job. The slatted armour that catches RPGs in mid-air so their fuse doesn’t hit the armour. You literally pull them off like thorns and disarm them. What the tank became was an all-purpose fighting machine with troops, guns, defence, navigation and surveillance equipment all rolled into the one vehicle, taking the best of everything and packing it into a mobile, killing machine.
Technology is HARDWARE+SOFTWARE 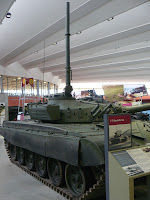 Smart design was the key to tank development. As the Germans widened their trenches, the tanks got longer. Some major innovations included simply sloping the armour, this meant that bullets and shells had to chew through more armour to get through and the slope deflected the impact. Russian tanks develop long snorkels so they could cross European rivers during the Cold War. Concrete crossing points were even found in the West after the wall came down! 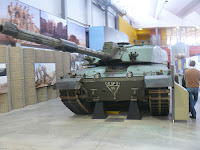 The business end of the tank is the gun barrel. This is what gives it menace. Accurate to within feet at five and half kilometres they destroy their target every time. In a rather sad story, the ex-tank driver told us that only one Challenger had ever been taken out in battle, in the Gulf War. A crew had gone off grid for a spot of sunbathing. Another Challenger had spotted it and at 5 kilometers had gone all the way up the chain of command. They fired and killed the entire crew, who would have known nothing about it.
The barrels are clad, with sights and cameras down their length as even the sun shining on one side will heat one side up and introduce aim errors. Depleted Uranium tipped shells work just through kinetic energy. They punch a small hole on their target tank, literally liquidise the crew and produce pressure so great that it pushes the liquidised contents back out of the hole. But it’s now the software that sets targets, identifies threats, controls fire and navigates the tank that is important as its hardware. It’s the calculations made of cost of manufacture, fuel consumption and numbers that matter.
Technology is about SCALE 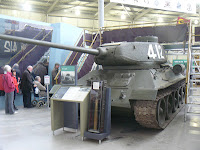 A T34 sits there with a roughly cast turret and no frills. They gave their tank crews padded helmets, rather than padding the tanks, saving time and money and although crudely built, they made 84,000 of them with handles for troops to hang on to. The Easter front became a war of attrition with the Russians simply outnumbering the Germans in tanks and men. They also used small Mongolian tanks crew. The rest is history.
Technology is UNPREDICTABLE 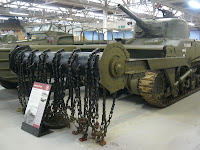 Technology is often unpredictable and the tank was to develop into a remarkable flexible workhorse, with grappling hooks to pull back tangles of barbed wire and create a gap for troops and horses, mine clearer with a huge rack of ball and chains up front for triggering mines, train tanks mounted on rails, amphibious tanks, anti-aircraft tanks and so on. There were even fire breathing tanks for burning snipers and troops alive. If their crews were caught they were executed by the Germans on the spot. They were used for many more purposes than were ever imagined when they were first built.
Technology locks in PRACTICE
A serious consequence in the military is fossilised practice, where hardware contracts often stretch out to as long as 30 years, with an inbuilt resistance to change, especially when the weapons become embedded and locked into regimental structures.
Technology can be USURPED
If we see a tank on our TV screens today, it’s likely to be the state using it on its own citizens. We saw it with Gadhafi and now see it with Assad. In these circumstances it’s a blunt and brutal instrument, used to shell urban areas, with many civilian casualties.
Technology DIES
Like most technology, it has largely had its day. There are no British tanks in Afghanistan. Why they’re too heavy to fly in and we’d never be able to fly them out as the air is too thin and the last thing we want is to leave them behind! Besides, in modern urban warfare, tanks are cumbersome. They’re too big to get down streets, vulnerable to ambush and wreck the roads and drainage systems. The last major tank on tank battle was in 1967 – the Yom Kippur War. The British Army has 300 tanks and they’re scrapping 250 of them. In the end tanks lock personnel into relatively easy to identify targets so tanks are giving way to smaller, more flexible, all-purpose, armed vehicles.
Technology produces NOSTALGIA 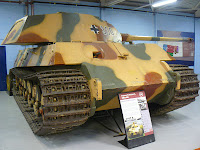 One need only watch the visitors at The Tank Museum and the newly built tank track stadium for summer events to see that many are fond of tanks and see in them a symbol of power and victory, especially for the British, who invented the tank. Even now they look and sound like dinosaurs, beasts from the past.
Conclusion
Tanks appeared at the start of the 20th century and are now being mothballed. They were the land weapon of choice for nearly 70 years. In the end newer technologies, especially accurate missiles fired from the air, and now from drones, threaten their very existence. So we’re back at our first rule, technology changes the rules, again and again and again. Resistance is futile – even if you have a tank!
at November 11, 2012