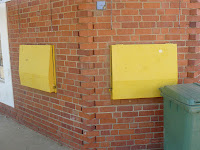 “I wouldn’t take it if you offered it to me for free” said the head of the school I visited  in the huge Katutura Township on the outskirts of Windhoek in Africa. In 2008 some guys turned up started to drill four holes in the wall, installed dial-up computers, and left explaining almost nothing. Within three months the project was dead. Internet access was intermittent and larger boys dominated the computers, playing games. At best a distraction, at worst, yet another failed and misguided idea imposed upon a community that was neither asked nor consulted. Today the four ugly, padlocked shutters are all that remain, just as we saw in my last report on the ‘hole-in-the-wall’ report in India.
Hype cycle

Of all the learning technology projects I’ve witnessed over the thirty years I’ve been in this field, this is the one that most closely matches the Gartner hype cycle. Since 2007 Sugata Mitra has been doing the rounds giving exactly the same talk, same pauses, same anecdotes and same jokes. I have just seem him give exactly the same speech I saw him give six years ago. This is the only thing that has been sustainable in the project; the hype-fuelled marketing. It has, I hope, reached its ‘Peak of inflated expectation’ and is now plunging headlong into the 'Trough  of disillusionment'. When I asked a government official what happened she said “it didn’t work….we must do some research to see why it failed”.
Self-defeating
For Arora, who visited the sites in India, there was “little real independent evidence, other than that provided by HiWEL“. It did “not compare the amount of time spent on hole-in-wall material with same time in school….the comparison was meaningless” and in the end the project was “self-defeating… ‘hole-in-the-wall’ has become the ‘computer-in-the-school’”.
Project not effective
Mark Warschauer,  Professor of Education at the University of California, who also visited the now abandoned sites,  found that “parents thought that the paucity of relevant content rendered it irrelevant “ and “criticised the kiosks as distracting the children from their homework“. Overall there it was “low level learning and not challenging… with no Hindi content (only language they knew)”. In fact, “most of the time they were playing games”. On top of this, just as in Africa, “the internet rarely functioned”. To sum up, “overall the project was not very effective”.
Conclusion


At the E-learning Africa Conference, where I gave a keynote, workshop and debate contribution, I met practitioner after practitioner who welcomed by more sober view of the project. They too were skeptical as all the evidence they had suggested that teacher involvement was vital. Person after person shook my hand saying how glad they were that someone was standing up to the hype.

Having used Sugata Mitra's principles in my class, create a question, form a group of 4, answer the question, present the answer, I have found it to be quite effective. My students are more engaged, behaviour problems have dropped, interest in learning and school risen dramatically and reading scores improving. While the hole in the wall might be outdated the philosophy is not.

Hi Bill
I have no problem with teachers's setting up groups and asking questions but this is not Mitra's idea or philosophy and is also in direct contradiction to the hole-in-the-wall experiment. As a 'philosophy' of education it goes back to Socrates and has been used since the very inception of computer technology in education.It is certainly to be encouraged but the details from Mitra are sketchy.

Thanks you for offering your tempering thoughts on SMs projects. the Hype model is incredibly useful to reflect around in this context, and has helped me also examine my readiness to embrace something (which was incredibly attractive and awe inspiring) without having first taken time to explore the other perspectives you have described.

It would be helpful for SM to respond to some of your critique, and I am now viewing his work with a keen eye.

Hi Tam
He did respond to my first post - rather ungraciously, I thought

I quote:
I notice my rebuttal is asked for. It is all there in my last response on this page. I know it is less than as literal as it should be, but then I am oriental, you know, we try to pack as much in as little as possible :)
I said Victorian schooling is obsolete and corrected immediately to 'outdated'. No one noticed?
I asked if peer reviewed papers in international journals are to be considered flawed. No one said anything.
NIIT did not fund my research, the World Bank did. Anyone noticed?
Lastly, it took me 30 minutes to think about and write this response. I would have spent the time on planning a new project for very poor children. Would someone, perhaps Donald, like to take the responsibility for this wastage and the resultant loss to them?.
Please do carry on with your armchair debate in the comfort of the age of empires money that is, finally, mercifully drying up.
I will work with the victims, use the methods I know, publish and one day reverse the wrongs.
Enough rebuttal :) SUGATA MITRA

I don't understand your criticism of Hole in the Wall Learning. Mitra's point is that children can teach themselves if given constructive, interactive learning tools. No surprise since that has been known since the sixties. Furthermore there are millions of children now and over the next decade that have no literate adults to teach them. Therefore it is clear that those who obstruct the deployment of such tools are endorsing this gross injustice. The injustice is perhaps less obvious in the cases where there are teachers and the result is worse for the children than no institutionalized teaching, but there is no point is discussing that complex topic with those who fail to see the former.

Hi Jim. Thanks for your comment. First the point that children 'learn for themselves' is not proven - that's what the research showed - the kids tend to play games, exclude girls and as the content is in English it is not an effective learning tool. Mitra's 'school in the cloud' may be a better prospect in that respect. Speaking to people and parents on the ground, they see it as an expensive folly. In econmies that exist on $1.25 a day, expensive computers and internet connectivity are ot the answer (and I've spent 30 years deploying this stuff). The point is that Mitra abandoned his hole-in-the-wall projects for 'schools', so the experiment failed.. Worse than this, these failures instill a sense of resentment on the ground making it difficult for more culturally sensitive and sustainable solutions to be implemented. The injusticeis people from Universities, far teh problem, thinking they have silver bullet solutions. They don't. In fact, they often create more problems than they solve.

Donald, you seem to be conveniently combining two separate arguments into one. I get that you are against the Hole In The Wall. It is long past that experiment. Kids teaching themselves is a different story. Throughout history man has proven that they can learn without teachers. This is how we advanced as a society. It is really about sharing thoughts and ideas which is what kids do naturally. The idea of SOLE is the adults tying together something that has been around and given it a new name. It really is research and sharing. The things the kids in my class like about it is that they get to decide on what is researched and reported on without all the bureaucracy slowing them down. The kids in my class do not play games on the computers, Ipods, or tablets when at school. I have discussed and stressed what the ones at school are for. They accept it. They do like the fact that they are learning about what interests them instead of reading a story and answering questions.

Of course people learn without teachers. teaching has never been a bnecessar condition for learning. But this is a trivial and obvious fact and we didn't need Sugata's experiments to show that this is true. What we're talking about here are experiments that 'failed'. We have nothing to learn from them, oter than what NOT to do in this context i.e. do NOT just dump hole-in-the-wall computers and hope for the best. Do not ignore the local context and language. Kids teaching themsleves is an old story and nothing to do with Sugata. If you didn't, a a teacher, allow children to learn themselves in some contexts you would be a pretty odd teacher or parent. All this does is bring us back to what's good and bad in school practice and there are pelnty of experts with well-researched findings that tell us lots about this. Mitra is not one of them.

Another set of dysfunctional holes in the wall have been found recently in Uganda. All the original ones used in the 1999-2005 experiments are dysfunctional.

The purpose of those experiments as clearly stated in the 2005 paper is to find out if children can teach themselves to use a computer and the Internet by themselves. That was found out and is well known today.

Yes - the findings of the original HitW findings have been over extended to education in the form of SOLE for which there is very little independent evidence.