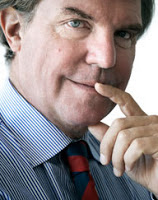 “Some idiot in our organization or in the Media Lab had disabled the camera, and they figured out the camera, and had hacked Android.” Well, no, the only idiot in this story is Negroponte, as the hacking story is a lie. They actually pressed the reset button on the side of the tablet. On this definition the local baboon could have ‘hacked android’. So why would an MIT academic tell deliberate lies? All in his team knew the hacking tale was wrong, yet no one came out and said it.
When I wrote a critique of the project, I had my suspicions, now those suspicions have been confirmed. At E-learning Africa this week, I spoke to someone on the ground, who was furious about the publicity the project had received. He is doing sterling work with laptops elsewhere in Ethiopia and resents the TED hype that surround Mitra and Negroponte, as it distract from the necessity of training teachers and being sensitive to the context and culture into which technology is placed.

A perfect example of this type of cultural insensitivity, is the ‘Alphabet Game’ where they had to ‘recite’: A for Apple, C for Cat… O for Octopus – OCTOPUS! Did anyone tell Nick that Ethiopia doesn’t have a coast? You’d need a passport to see an octopus.
Wenchi Crater was a spot where dozens of tourists a day visit, ride horses and go for boat trips on the lake. He thought the idea that these kids had never seen any written word on packaging, road signs or print, preposterous.
Mosquito and the tortoise
This is one of those annoying ‘mosquito’ projects. In Africa, there’s ‘mosquito’ projects and ‘tortoise’ projects. Mosquito projects are noisy, short-lived, suck you dry and often have nasty side-effects. Tortoise projects, take their time, have a protective shell of sustainable self-sufficiency. They are quiet, often unobtrusive but long-lived.
A tortoise will have sustainable technology, sustainable stakeholders, sustainable teaching, sustainable learners, sustainable change-management, sustainable electricity, sustainable plugs & cables, sustainable resources. They will also be sustainable in their language, culture and context. Above all they need to be sustainable on COST. Sustainable innovation is what Africa needs not just innovation in itself, Without sustainability there is no real innovation, only 'bad' innovation in projects that fly for a short time and die.
Conclusion


Negroponte, like Mitra, is doing more harm than good with these short-lived mosquito projects. It’s nothing more than self-aggrandisement that detracts from more worthy and long-lasting efforts. Even worse, speaking to someone senior in the European Commission, Negroponte was shameless in getting his brother, John Negroponte, former US Deputy Secretary of State, to pull strings for meetings with EU decision makers (and others elsewhere in the world). This is the sort of stunt that amounts to little more than educational colonialism. I should add that I have no problem with the OLPC project in Rwanda,where an enthusiastic guy is trying hard to make it work.
at June 05, 2013

Nicholas is not OLPC, and OLPC is not Nicholas. He is a very good fundraiser and schmoozer. He is not by any stretch of the imagination, a technician and he doesn't claim to be. It certainly has to be said though that without him the OLPC project would not have happened.

My view is that where there has been strong local support and widespread adoption, such as Plan Ceibal in Uruguay, the project has thrived and provided great value. In other countries the machines have been imported, and sit in warehouses or locked storerooms and provide little value.

But we heard so many stories and testimonials from common people I have to believe the project has done a lot of good. We heard of Brazilian kids making a TV journal to provide positive coverage of slums which usually were the target of media scorn. We heard of Indian kids taking video of music videos from their tvs to share with their friends. Whenever kids in Uruguay came back from a break our servers would groan with the mass of new apps being downloaded.

I myself got involved with the project because I loved the hardware. The design is brilliant, very low power (2-9 watts for the original model) and very rugged. It really can be disassembled and reassembled by a six-year-old with a screwdriver.

There have been a fair number of supply chain problems which have been handled. When you are shipping computers from Shanghai to the remotest corners of Peru, Mongolia, or Afghanistan, you are going to have those.

With Nic you have to take the good with the bad. I would not say he is a nice person, but I will say he is a good person. Certainly a fair amount of what he says in public is marketing hype and has to be interpreted as such.

A lot of the criticism of OLPC has been of this patronizing "they are poor people, what do they need computers for?" sort. The answer is they need computers for the same things other people do. To keep track of farm records. To learn to read. To make and share videos. To communicate. To read wikipedia and edit it. To use social media. To be world citizens.

Ultimately it is up to them, the people, what is the XO good for. We heard of people dismantling theirs in order to use the screen light for home illumination. The only electric light in the house. People used them in all kinds of unexpected ways. We heard that in Rwanda, a few enterprising souls set up OLPC repair centers, repairing XO's for 5 dollars American. And people who had very little wealth and very little cash would get that money to get their box fixed because that little green dorky computer was the most valuable treasure their family had. A window to the world and a source of pride.

Also don't forget the stone soup aspect of OLPC. Villages getting XO's also perforce got: electricity. A school with a roof and a lockable storeroom. Telecommunications with the outside world. A sense of pride and ownership, of being part of a worldwide community. All tremendously valuable.

The year I spent as sysadmin at OLPC was one of the best of my life and I treasure the project and the people involved with it.

I hardly think Mitra's work could be classed as a 'Mosquito' project. To do so is to denigrate all the work that's taking place around self organised learning...

Hi Jaye
My own view is that self-organised learning has been around since Socrates and in technology based learning for decades. Mitra has added nothing new here. In fact, his unsustainable projects do more damage than good. See my previous posts on Mitra.