Latin: 10 reasons why it should NOT be taught in schools 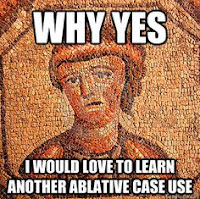 The venerable Mary Beard, whom I love, not only for her books but also her television programmes, and the fact that all that bullshit about presenters having to be groomed clones, is beneath her, invited me to contribute to a debate on ‘The Future of Latin’ at the British Museum. So how did it go?

Sell-out
A sell out, with 350 paying Latinists, who turned up to hear Mary chair a debate which pitched David Aaronovitch and I against Peter Jones and Natalie Haynes. As we walked on stage and introduced ourselves (I found that I was the only person who didn’t go to Oxford), everybody seemed to know each other (except me). This is exactly the sort of challenge I like, as although it was a sell-out, I’m not in the habit of selling-out on my beliefs and principles.

Neither contrarian nor philistine
To be clear, I was not there as a contrarian or philistine, as I’ve been in love with the classics since I was a boy. My first secondary school lay astride the Antonine Wall and for over 40 year I’ve been to every corner of the Roman, Greek and Egyptian Empires, from Scotland to Syria. I cycled Hadrian’s wall two years ago, still go to Greece every year and never miss an opportunity to visit sites, especially on the Peloponnese. and I go to Egypt, as I do almost very year, for another dose of Egyptology in December. I am, however, also a rationalist and realist, and my 30 plus years of experience in the learning game have made me deeply suspicious of the position of Latin, among many other things, in our culture and school curriculum. I was there to argue that it should NOT BE TAUGHT IN SCHOOLS AT ALL. These were, and are, my arguments. Note that I am not against LATIN a language or even an object of study, I am against it being taught in schools. The arguments for each of these propositions were presented by my opponents and audience members. These were my responses.

1. LATIN does NOT help you learn other languages
Why scratch your ear by going over the top of your head? Isn’t it obviously easier to just get on and learn Spanish, Italian and French, rather than the convoluted route through Latin. Researchers Thorndike, Sherwin, Haag & Stern all think so. In the Sherwin metastudy 'Research and the teaching of English, “the study of Latin does not necessarily increase the ability to learn another language… No consistent experimental evidence in support of this contention was found.” Learners have limited time, that time is clearly better spent on the target language itself.
In fact, Latin can make learning a new language MORE difficult. In Search of the Benefits of Latin by Haag and Stern (2003), who followed up on Thondike’s work nearly a century earlier, in the Journal of Educational Psychology is the key paper. They took two groups of German students, one who studied French, the other Latin as their second language. Both groups were given a course in Spanish and the results measured. When the results were analysed by a Spanish assessor (who didn’t know who had taken French or Latin) the French students made significantly fewer grammatical errors than the Latin students. As predicted the Latin students wrongly transferred the rules of Latin to Spanish. For example “misconstructions in verbs emerged to be either highly reminiscent of or identical to Latin verbs”. The French group turned out to be much better prepared to cope with Spanish grammar.

Psychologically the Latin students had suffered from negative transfer using false friends in their new language. The problem with understanding Latin is that you need to pay close attention to word endings; case markers on nouns and time markers on verbs. But in English and Romance languages word order and prepositions are more important. Endings play a minor role. The fact that the grammatical similarities between modern Romance languages are much greater than that between Latin and modern Romance languages, means that the defenders of Latin are flogging a dead horse. Thorndike was right – transfer of the wrong kind occurs.

2. LATIN does NOT have an edge in improving cognitive skills
This argument is greatly loved by the parents of ‘gifted children’ although I rarely come across a middle-class parent whose child is not gifted. For gifted, read ‘pushed’ (not a bad thing but very different). Again Haag and Stern (2000), in a review of the literature found that Thorndike, “did not find any differences in science and maths in students who learned Latin at school and those who did not”. Two groups of comparable students, where one studied Latin, the other English, were assessed after two years, “No differences were found in either verbal or non-verbal IQ or grades in German or Maths”. This again had been predicted by Thorndike decades before, namely that transfer needs common ground in the source and target.
3. LATIN does NOT give significant advantages in using English
English is a Germanic language – we are largely speaking in Old English rooted language. The TOP 100 words are Old English (sorry three are Old Norse – THEY, THEIR, THEM). As for one audience member’s argument that it is necessary as all children need to be able to understand etymology, I disagree. Is there anything more annoying than the dinner-party bore who stops you and explains the root of a word, as if it made any difference to your argument or its contemporary meaning. If anything a good course in Old English would be better. Meaning is use – get over it Latinists.
4. LATIN does NOT help you understand general grammatical structures
Stephen Pinker, Harvard’s world renowned expert in psycholinguistics backs this up in The Language Instinct, “Latin declensional paradigms are not the best way to convey the inherent beauty of grammar”. He recommends computer programming and universal grammar on the grounds that they are “about living minds and not dead tongues”.

5. LATIN does NOT guides us correct use of English grammar
Pinker has a go at the Latin language mavens who want to pointlessly foist Latinate rules of grammar into English. As Pinker explains, this snobbery took root in 18th century London, when Latin was used as a mark of social class (still true today) and Latin grammar rules were crudely pasted into books on English grammar, for example, ‘don’t split infinitives’ and ‘don’t end a sentence with a preposition’. Latin simply doesn’t allow you to split an infinitive and to stupidly insist that it’s wrong in English, is as stupid as making us all wear togas.

6. LATIN is necessary for SCIENCE, LAW and MEDICINE
One girl in the audience, from Merseyside, but remarkably free from any Merseyside accent, was adamant that Lawyers needed to have studied Latin. This is laughable. Incidentally, if you’ve heard the argument that Latin helps medical students learn and understand the considerable amount of medical vocabulary that has to be learned in medical schools. This also turns out to be false as shown in Pampush and Petto (2010).

7. LATIN brings the joy of ideas and literature
One contribution from the audience I did like was the idea that Latin bridges us to rich tradition of thought and literature. He mentioned Roman literature but also the Magna Carta, Bacon and Newton. First, anyone studying history will not lose out by working with translations of the Magna Carta or Bacon. And does anyone really need to read Newton’s tortuous Latin, other than scholars in the history of maths? I think not.  And why not Greek? (oops started a sentence with a conjunction). Wouldn’t you prefer the riches of Homer’s Iliad and Odyssey, along with the works of any one of Aeschylus, Sophocles, Euripides and Aristophanes to the largely derivative Roman dramatists. Even in History, the Greeks Thucydides and Herodotus are a match for any Roman writer. In politics, our democratic traditions are largely Greek. Even English law is not Roman (although in Scotland it is). Then there’s the politics and democratic traditions that are fundamentally Greek. Even in maths and science the mighty Pythagoras, Euclid and Archimedes trump the Romans.

8. LATIN’s history of exclusion
Of course, Latin was introduced to this country as the language of the clergy, it was not, as is sometimes supposed introduced by the Romans, as few Latinate words come from that era. As the language of the church it largely excluded the laity, as most remained illiterate and spoke various forms of English. It was then used as the gatekeeper for learning. This had some benefits, when Latin was sort of European Esperanto, but continued for centuries after that died and was long used as the gatekeeper at Oxbridge and other institutions to keep the hoi polloi out. David Aaronovitch made the telling point that it is still a key ‘marketing’ differentiator for independent schools.

9. LATIN would NOT die if not taught in schools
There are plenty of scholars in subjects that are not taught at schools. The bottom line with any dead language, especially Latin, is that there’s little that is new and to be uncovered. Compare this to the vast amounts of Sumerian cuneiform tablets that still need to be both deciphered and excavated. In the end I agree with one of our greatest living Latin scholars Mary Beard, “the overall strength of the classics is not to be measured by exactly how many young people know Latin or Greek from school or University. It is better measured by asking how many believe that there should be people in the world who do know Latin and Greek.” This about sums up my position. I am not against the study of Latin or any other historic languages. This is largely a matter of proportionality for our Universities. By all means let a few study Latin. What I am against is too prominent a role for Latin in contemporary school curricula. Our young people have enough on their plate at 5-18, as the range of subjects expands to include a wider range of science subjects, IT and other vocational skills. A dead language at this stage is merely the dead hand of educational history being played out by interested parties.


10. LATIN is NOT about choice
Several people argued that Latin is a matter of choice in schools. The curriculum is crowded enough with increasing demand every year as new subjects, such as computer studies, emerge. As we have seen from recent educational lunacy in policy, has resulted in the destruction of choice in the curriculum. Professor Alison Wolf, Gove’s lapdog, ignored advice from industry and education experts to crush 3100 vocational qualifications. That strange beast, the EBacc, which had Latin as a core choice, deliberately EXCLUDED all vocational subjects, even ICT. Gove's successors are still at it, creating a one-sided system that simply reinforces the old apartheid system we have in this country between academic and vocational learning. It’s a mistake that may take decades to reverse. Who would have thought that with all of this talk of 21st century skills, mass youth and graduate unemployment, we’d be discussing the promotion of the teaching of a 2nd century BC language that no one speaks, as a core curriculum subject.

Conclusion
I rather liked this audience and I especially liked Peter Jones.  He was my opponent but put to bed those old tropes about Latin improving your ability to learn languages, improve intelligence or think logically. He was remarkably free from cant and any sense of snobbery. What he loved was Latin and his plea was for the beauty and intrinsic value of the language. With that I have no argument. Including it as a core EBacc subject is ideological nonsense and shows nothing but deep-seated snobbery.
at June 10, 2015