Khan's HOLES IN CHEESE trounces Mitra’s HOLES IN WALLS , as he talks about mastery & motivation 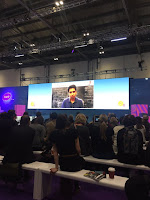 Good to see Salman Khan speaking at BETT, albeit by video link, rather than the all-too-predictable and fanciful Mitra. Salman Khan trounced Sugata Mitra’s gloriously irrelevant, utopian nonsense, with a level of relevance, detail and understanding that is always impressive. While Mitra talks a lot about education in the developing world with holes in walls, grannies and the hopelessly naive SOLE, Khan really has provided a free, world-class education for anyone, anywhere for hundreds of millions of learners.
Master - Swiss Cheese Problem
Khan's diagnosis of problems in some subjects, especially maths, has become known as the ‘Swiss Cheese Problem’. In a linear curriculum, with a large cohort of students, an assessment system that ignores mastery and demotivates through the wrong mindset in teaching and learning - large-scale failure is inevitable. He identified the problem precisely when he said that too many students in maths get moved on to the next topic without mastering what they NEED to know in order to progress. Most students are moved on with varying degrees of knowledge and skills, even the best performing students, with 80-90% scores still have a 10-20% shortfall. This shortfall varies from student to student, with often significant misconceptions and absences dotted around their mnds like conceptual holes in a Swiss Cheese.
Khan’s solution, and I agree, is to close these personal holes and move forward through the subject in a peronalised fashion catching and closing the holes, one by one, leaving no holes left behind. In practice, this means less focus on summative testing and fixed grades. The emphasis, he believes, should be on far more formative assessment and adaptive learning that leads towards complete mastery.
Motivation also
In addition, and I also agree, he also sees the need for motivational factors to be added, so that the student is not derailed by fixed mindsets around ability and talent. The hideous 'gifted and talented' movement is typical but much of the language around maths is about talent and ability, not perseverance and resilience. Dweck is his theoretical source for improving the motivational component. (for more on Dweck see here.)
Technology
The only way to do this on the necessary scale, he thinks, is to use technology. We have never, in the past, had the technology that could deliver this level of adaptivity, while maintaining motivation. Now we have, he claims. There are systems available that deliver personalized mastery through smart formative assessment, formative motivation and smart realtime use of algorithms and gathered data, to both eliminate the holes in the cheese, as well as maintain motivation. I have been involved in such work, have seen the data and the impact. He is right.
Conclusion


Like Wikipedia and MOOCs, whenever you mention Khan, you get that wrinkled face look and the educator’s favourite word ‘but….”. This is the Khan Academy’s tenth year of operation and it has been groundbreaking. Khan’s combination of an acute pedagogical analysis of the two key problems (mastery and motivation), both in the minds of learners and methods of teaching, are a real wake-up call. Technology is not about shoving devices into walls but using devices to close down the conceptual holes when you teach – that is what adaptive, personalized learning offers. Khan, for me, is way smarter than Mitra (or Robinson) and way further down the road in terms of real solutions.
at January 23, 2016