9 ways Africa can use AI to leapfrog into the future 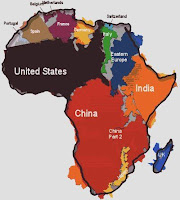 Africa is huge. Just how huge is rarely appreciated but this map helps. This massive landmass makes land transport difficult, physical internet cabling difficult, infrastructure difficult. But with two spots from one satellite, it is possible to cover the entire continent. Bad or non-exiting infrastructure is the condition for leapfrogging.
So here's a question.... What African leapfrogged the transport and energy sectors to such a degree that the oil economy look as though it’s on the way out? He did this by seeing the existing model as the problem – the oil economy - so created the self-driving, actually AI-driven, car and panels/batteries that change the way we power homes, even entire regions. He is, of course, Elon Musk,  a leapfrogger. But Africa leaps over frogs in all sorts of ways, from mobile banking to drones for blood delivery.
The first technology, the stone axe, was invented by early hominoid species in the rift valley in Africa, that allowed us to leapfrog other species, who may have been stronger and faster, but lacked the technology to compete. The first writing in the Nile Valley, again in Africa, on the first flexible writing material, Papyrus, also invented in Africa, allowed the Egyptians to leapfrog other civilisations, a stable civilisation that lasted continuously for 4000 years, longer than any other Empire ever. The very tools and technology that the modern world is built on were first seen in Africa.
There’s a lesson here – the ‘Leapfrog Principle’. This is the idea that one can innovate in environments where precedents and incumbents are poor, primitive or absent, easier than in wealthier or technologically richer environments. Africa can, again, be the crucible for leapfrog ideas and development. In finance, healthcare, energy, agriculture and education, AI can augment and improve productivity.
Leapfrog 1  Finance
Africa had little in the way of a retail banking infrastructure and most people did not have a bank account. Along comes the ubiquity of cheap mobile devices and Africa does what richer countries are only now waking up to – mobile banking. In its wake came advantages in communications, finding work, paying bills and agricultural information - markets, teachniques and so on. The runaway success of M-Pesa, the mobile money transfer service launched by Safaricom, Kenya’s largest mobile operator and Vodafone, in 2007, has allowed millins to pay bills, buy goods, receive remittances from abroad and even access learning. None of this would have been possible without AI-driven encryption and now AI as the new UI interfaces.


But let’s not underestimate the problems. Corruption, unstable political environments, poverty and weak regulatory environments don’t encourage investment and sustainable growth. To leapfrog, one must have solid ground from which to leap. Without a stable platform, these will be leaps of faith or leaps into the darkness. Innovation is only innovation of it is sustainable, that means stable regulations, a war on corruption and an investment environment that supports staged growth. Let’s start with education.
at January 23, 2018