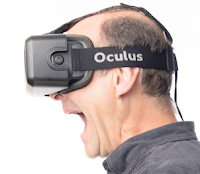 I have argued that several conditions for good learning are likely to be enhanced by VR. First there’s increased attention, where the learner is literally held fast within the created environment and cannot be distracted by external stimuli. Second is experiential learning, where one has to ‘do’ something where that active component leads to higher retention. Third is emotion, the affective component in learning, which is better achieved where the power to induce empathy, excitement, calm and so on is easier. Fourth is context, where providing an albeit simulated context aids retention and recall. Fifth is transfer, where all of these conditions lead to greater transfer of knowledge and skills to the real world.

This study from the University of Maryland starts to confirm my thoughts. This points towards possible improvements in efficacy, compared to 2D screens and tablets. The researchers created a 3D Memory Palace, or in modern psychology spatial mnemonic encoding, an idea that goes back to the Greeks, and a well known method of improving retention. Try it for yourself – place each of the first five Kings on England - William 1, William 2, Henry 1, Stephen, Henry 2 – in your house – one at the front door, next in the hall and so on. Now try to recall them. You’ll soon have all 40 plus Monarchs in your mind…
In the Maryland study, 40 people were split into two groups. Both were first shown printed pictures of famous people. One group then saw them in imaginary locations in VR then desktop, the second group saw the same but on a 2D desktop screen. There was an 8.8% better performance in the recall of faces in the correct location by the VR group and 38/40 said they preferred the VR for that learning task. Further questioning revealed that learners reported increased sense of ‘focus’ within VR. The researchers also felt that the physical movement within the VR world provided an experiential component that deepened the learning experience.
My guess is that more research of this type will also reveal increased retention and recall of knowledge and skills, as well as increased transfer, once real world tasks are involved. These are likely to occur in healthcare, where I've outlined 25 potential uses, many that have already been realised but there are many other potential uses.

Interestingly, WildFire, the AI-content creation service, works within VR. So you can place your online learning in context to increase retention, as the study suggests. In VR it uses 100% voice input for both navigation plus interaction.
Bibliography
Krokos, E., Plaisant, C., Virtual memory palaces: immersion aids recall," Virtual Reality. May 2018
at June 16, 2018