Are 'chatbots' a gamechanger in learning? 10 reasons and some warnings!

This was the debate motion at the LPI conference in London. I was FOR the motion (Henry Stewart was AGAINST) and let me explain why....

1. AI is a gamechanger
AI will change the very nature of work. It may even change what it is to be human. This is a technological revolution as big as the internet and will therefore change what we learn, why we learn and how we learn. The Top Seven companies by market cap all have AI as a core strategy; Apple, Alphabet, Microsoft, Amazon, Tencent, Facebook and Alibaba. AI is a strategic concern for every sector and every business, even learning. Nevertheless we must be careful not to hype their functionality. They are not capable of fully understanding every question you throw at them, neither do they have the general human capabilities of a teacher. They are, essentially, good within narrow parameters. We must manage expectations here.
2. Evidence from consumers
Several radical shifts in consumer online behavior move us towards chatbots. First the entry of voice activated bots into the home and connected the the IoT (Internet of Things) – Amazon Alexa and Google Home. My Alexa is linked to my internet music service, lights in my home and I use it a a timer for Skype calls and events during the day. It is integrated into my workflow.
3. Rise of voice
The rise of ‘voice’ as a natural form of communicating with technology – Siri, Cortana and other similar services. Over 10% of all search is now by voice. We have been using computer generated voice from text files in WildFire for some time. It adds some humanity to what can often be seen as the sterility of online learning.
4. Chat has superseded social media
The switch from social media to messaging/chat apps took place in late 2014 and the gap is growing – chat is the home screen for most young people. Look over someone's shoulder and you're far more likely to see a 'chat' screen than a website. The lesson here is that chatbots allow us to play to the natural online behaviours of learners. Then again, chat with another human is a little different from chat with a chatbot, far more limited.
5. Social
We are social animals and it was no accident that chatbots first emerged in social tools such as facebook and Slack. They are a natural extension of existing social learning, allowing us to place them in the workflow. Chatbots, like Otto, are designed to lie within these workflow tools, moving learning from the LMS to a more demand-driven model.
6. Pedagogy in chatbots

Most teaching is through dialogue. The Socratic method may have been undermined by blackboards and their successors through to PowerPoint, but voice and dialogue are making a comeback. Speaking and listening through dialogue is our most natural interface. We’ve evolved these capabilities over 2 million years, it’s natural and we’re grammatical geniuses aged 3, without having to be taught to speak and listen. Within dialogue lies lots of pedagogically strong learning techniques; retrieval, elaboration, questions, answers, follow ups, examples and so on. It just feels more natural. Once again, however, we must be careful in thinking of chatbots as people. They are not conscious and not capable of full-flow, open dialogue.
7. Evidence in learning
An exit poll taken by Donald Taylor, from Learning and Technologies conference this year, showed Personalised learning at No 1 and AI and No 3. The interest is clearly strong and there’s lots of real projects being delivered to real clients from WildFire, Learning Pool and so on. However, be careful about vendors telling you their chatbot is true AI. Many are not. It is fiendishly difficult to do this well, so most are very structured, branching bots with limited functionality.
8. Chatbots across the learning journey
There are now real chatbot applications at points across the entire learning journey. I showed actual chatbot applications in learning in the following areas:
Recruitment bots
Onboarding bots
Learner engagement bots
Learner support bots
Invisible LMS bots
Mentor bots
Reflective bots
Practice bots
Assessment bots
Wellbeing bots
The problem we have is that most bots are actually just FAQ bots. They are pixies for search. In the learning game they have much more potential. My own view is that we'll see a range of bot types emerge that will match the needs of learners and organisations. We must think more expansively around bots if they are to play a significant role in learning.
9. They’re learners
An important feature of modern chatbots, compared to ELIZA from the 1960s, is the fact that they now learn. This matters as the more you train and use them, the better they get. We used to have just human teachers and learners, we now have technology that is both a teacher and learner. This means one can take advantage of bot services from some of the large tech companies. But be careful - it's not cheap and they tend t swap out functionality with little sensitivity around your delivery.
10. It’s started
Technology is always ahead of the sociology, which is always ahead of learning and development. Yet, we see in these many projects, even with relatively primitive technology and emerging trend – the use of technology delivered chatbot learning. In time, this will happen. I've been involved in several projects now across a range of chatbot types.
Objections
Nigel Paine chaired the debate with his usual panache and teased questions out of the audience and the real debate ensued. The questions were rather good.
Q Has AI has passed the Turing test? 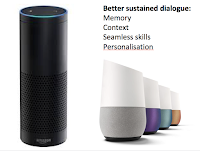 First, there are many versions of the Turing test but the evidence from the many chatbots on social media all the way to Google Duplex, shows that it has been passed but only in limited areas. Not for long, sustained and very detailed dialogue, but certainly within limited domains. Google Duplex showed that we’re getting there on sustained dialogue and the next generation of Amazon’s Alexa and Google Home will have memory, context and personalisation in their chatbot software. It will come in time.
Q AI can never match the human brain
This is true but not always the point. We didn’t learn to fly by copying the wings of a bird – we invented new technology – the airplane. We didn’t go faster by looking at the legs of a cheetah, we invented the wheel. The human brain is actually a rather fragile entity. It takes 20 years and more of training to make it even remotely useful in the workplace, it is inattentive, easily overloaded, has fallible memory, forgets most of what its tries to learn, has tons of biases (we're all racist and sexist), sleeps 8 hours a day, we can’t download, can’t network and we die. But it is true that it is rather good at general things. This is why chatbots are best targeted at specific uses and domains, such as the species of chatbot I listed earlier.
Q Chatbots v people
Michelle Parry-Slater made a good point about chatbots not replacing people but working alongside people. This is important. Chatbots may replace some functions and roles but few suppose that all people will be eliminated by chatbots. We have to see them as being part of the learning landscape.
Q Chatbots need to capture pedagogy
Good question from Martin Couzins. Chatbots have to embody good pedagogy and already do. Whether it’s models of engagement, support, learning objectives, invisible LMS, practice, assessment or well being, the whole point is to use both the interface and back-end functionality (important area for pedagogic capture) to deliver powerful learning based on evidence-based theory, such as retrieval, effortful learning, spaced-practice and so on. This will improve rather than diminish or ignore pedagogy. In all of the examples I showed, pedagogy was first and foremost.
Q Will L and D skills have to change
Indeed. I have been training Interactive Designers on chatbot and AI skills as this is already in demand. The days of simply producing media assets and multiple choice questions is coming to a close – thankfully.
Conclusion
Oh and we won the debate by some margin, with a significant number changing their minds from sceptics to believers along the way! That doesn't really matter, as it was a self-selecting audience - they came, I'd imagine, as they were curious and had some affinity with the idea that chatbots have a role. My view is these debates are good at conferences - by starting with a polarised position, the audience can move and shift around in the middle. The audience in this session were excellent, with great questions, as you've seen above. Note to conference organisers - we need more of this - it energises debate and audience participation.
at September 07, 2018

Awesome blog. I enjoyed reading your articles. This is truly a great read for me. I have bookmarked it and I am looking forward to reading new articles. Blue Logic Digital are chatbot deveolpment company in dubai. see the our servies below