Education during COVID debate in Berlin 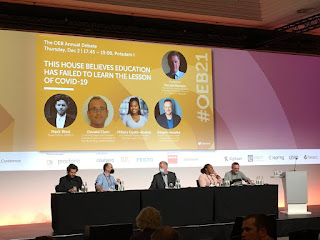 The UK Government has announced an acceleration of the booster programme, as they know a huge wave of infections is coming based on Omicron's infection rate (high). Although the variant is less lethal, when you have so many people infected, the strain on hospitals will be intense and people will die.

Yet the Government (and opposition) completely ignores the fact that schools and Universities are two massive vectors for infection. They are basically wheel and hub networks designed to optimise viral spread. Schools bring huge groups of people, a thousand and more, from every street in the community, to sit in small cramped rooms all day, then send them back to their homes, five days a week. With Universities you do this on a national scale with longer distances. These vast networks basically boost infection by forcing millions into close contact wil Amazon levels of distribution reach.

I took part in The Big Debate in Berlin this month. The motion was “This house belives that Education has failed to learn the lesson of Covid19”. I was up against the head of the NUS, who thought that “poor students who had to study in their pyjamas and dressing gowns” were “suffering badly from mental illness and loss of social contact”. Not only was this a caricature of education, as most people being ‘educated’ were in schools or the workplace, it was the usual placing of students on a social pedestal.

My retort was that viewing students as victims was an insult to the front line workers who had no choice other than to risk their lives, and sometimes die doing so, to keep us fed, supplied and safe - the delivery drivers, lorry drivers, paramedics, care home workers, police officers, bus drivers and factory workers - almost none of whom went to ‘Uni’.

I did argue that educators did a good job, many raising their skills as online educators under immense pressure. It was also good for both teachers and learners to raise their digital skills and literacy. Like Eric Mazur at Harvard,, I argued that it would be "almost unethical" to go back on those gains,

Rather than build on the advances we’ve made on Blending learning, the education system seems to be defaulting back to their old model. Why? Lecturing is easy, teaching is hard. We have a chance to make Higher Education cheaper, more accessible and efficient. We may blow it.