How Emotions are Made by Lisa Feldman-Barrett 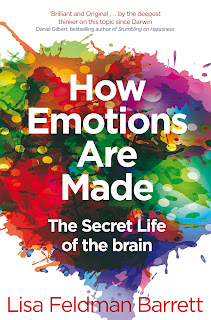 This book came highly recommended and I have read Damasio, Panksepp and several other academics, who had looked at emotion in relation to learning, so was looking forward to the read. That hope was misplaced.

It was puzzlingly obtuse. She straight away attacks emotions as some sort of ‘essence’ produced in specific areas in the brain, unconnected to other cognitive processes, claiming they are ‘constructed’. Always a dangerously vague word ‘constructed’. Damasio, Panksepp and others have spent a long time giving us a taxonomy of such emotions, along with physiological evidence for their existence. She claims that there is no evidence for specific areas of the brain being tightly defined as the set of particular emotion but again this is a straw man. There is evidence from human lesions that emotions have identifiable brain structures, her averaging out on meta-studies is odd, and we know that many cognitive processes are widely distributed across the brain. That specific areas are difficult to find is not the ‘nail in the coffin’ argument she claims. Panksepp accuses her of using wide correlation and that the area has solid causal evidence for emotions being identifiable as innate and physiological phenomena.

Then pops up the weird idea is that emotions need language. This is rather wild, reviving the Sapir-Whorf idea, that language affects cognition and that our perceptions and feelings are all relative to our spoken language. You know the story - Eskimos and snow. Pinker destroyed this idea in The Language Instinct and think about it, do you need the word‘jealousy’ to feel jealous, ‘anger’ to feel angry? Of course not. You can see how this linguistic necessity opens up a space for a theory that puts emotions on the cultural not physiological domain but that would be a caricature of human nature, a return to the sort of blank slate ideas that Pinker and others have been fighting for years. The idea that emotions are partly cues from language and not physiological systems is wrong-headed and common sense tell us so. There’s a reason men are more prone to violence than women, that is evidenced by the vast gender difference in such crimes and the ratio of men to women in our prison populations. There are different hormonal and physiological systems that play a huge part as causes.

The book therefore plays to the postmodern idea that language is all, that we don’t have emotions until we label them and can use words for them… but that is a category mistake. We have such words because we communally have the same or similar emotions, we don’t have emotions because we have the words. This is similar to the common confusion that the meaning of words come from the dictionary. Well no, the meaning of words are only in the dictionary because we all agree that this is what they mean in common usage. It is the other way round. We have common word for emotions because they exist, not because the words for them exist. One can feel jealous when one sees one’s girlfriend responding well when being chatted up by someone else. This is clearly an emotion separate from the use of the adjective ‘jealous’ or noun ‘jealously. We would feel it even when we had a cognitive impairment and forgot these two words. It is to confuse the signified with the signifier.

There is another a sematic trick here, hijacking the word ‘affect’, separating it from ‘emotion’, then using it as a bucket to fend off criticism. This is problematic. These semantic splits were evident in Hume, who wrote a lot on this topic, he describes passions, sentiments and taste, Panksepp has primary, secondary and tertiary emotions, there’s moods, feelings and attitudes – it’s complex, layered and subtle. You don’t have to be a Paul Ekland fanatic to see that his Basic Emotion Theory needed refinement (which is exactly what happened) but this constructional theory of emotion swings the pendulum so far in the opposite direction that it disappears from sight. For Barratt this language argument is the essence of her argument and if it falls, it all falls.

Then there’s the curiously Cartesian idea that mammals don’t have emotions. My dog gets jealous when I pat other dogs and when I last checked he was not a fluent English speaker. There’s a reason we tend to have mammalian pets – they have emotions, something Barratt denies. By now I’m thinking, this is a return to the hideous Cartesian idea that animals have no emotions, as they have no language but read what Descartes did to animals, as a consequence of such ideas - it will make you retch. She relegates animals to the level of simple ‘affect’ producers of pleasure and pain. I wonder if she has a dog… she’d soon change her mind. Emotions clearly have an evolutionary past in higher-order mammals that didn’t just spring into action some tens of thousands of years ago when we acquired language. They are there in tool production, the marks we made half a million years ago, the sculptured objects. Tellingly, the book doesn’t explain how emotions came to be, how they arose in our brains, a point made by Westland (2021). The answer is clearly evolution as a set of advantageous and selected evolutionary traits. The idea that emotions and language came into being at the same time doesn’t have any aetiological, evolutionary explanation and she makes no effort to give one.

Throughout this I felt as if Barrett was jumping around, confusing different dimensions of emotion. First and foremost, their physiological manifestation as something we feel and experience (this is very real), then, layered on top of this, we use language to talk about them (which is something separate), then there are our external behaviours, beyond this how we read emotions in others (something separate again). Barrett wants to demote the former and claims that the latter are dominant. I don’t buy this.

Just as I thought things couldn’t get weirder, she claims that we learn to smile from TV and that it is a learnt behaviour not a signifier of emotion. Really? Blind people don’t smile? And yes she claims that smiling is a recent cultural phenomenon. I don’t think I’ve ever read a more depressing scientific idea. Nothing could be further from the truth. Barratt was criticised in Nature for ‘caricaturing’ other researchers’ findings and in the case of facial expressions she does precisely that. Sure, it is a complex area being explored in detail using face recognition software but the Barratt straw man argument surfaces again. Emotions are very real, depression is very real and their expressions, such as laughing and crying at a movie, very real. The idea that variation in emotions and their facial expressions vary does not entail social construction. Just because I can weep when sad and grieving but also when laughing until I cry, does not mean any of this is socially constructed. The rebuttal by Adolphs (2016) explains this well. To reduce them to social agreement, dependent on language, is a form of the essentialism she attacks, merely contemporary essentialism. To be fair she is not saying emotion doesn’t exist, only redefining what ‘real’ means. Her paper Emotions are real (2012) explains this and is worth reading, as the book How Emotions are Made (2017) lacks some of the core arguments. Emotions are biologically real and socially constructed at the same time. But she takes social construction to such as extreme that it becomes laughable. She distorts Searle and plucks out ‘category knowledge’ to build her theory, based in the unconscious, requiring social agreement, conveniently tucking it out of sight and mind. This is where credulity is stretched to breaking point.

The problem here is that it promotes a narrative that emotions are merely social and learned, opening up a space for people to come in with glib solutions, like emotional intelligence, as if all of this lies in the social realm.

Intriguing ideas I admit but so many babies are thrown out with the bathwater, and the bath, that it becomes quite fantastical. Then there is the superfluous stuff in the book about emotion and the law and the sort of self-help stuff on sleep and diet.

It is a book of the age, and will of course be eagerly consumed by those who want to believe that all is nurture not nature, and the lazy drift towards cultural, social and linguistic relativism, that everything is socially and linguistically constructed. This is why it’s loved - it is also precisely why it is largely wrong.

Barrett, L.F., 2017. How emotions are made: The secret life of the brain. Pan Macmillan.

Panksepp J. Neurologizing the psychology of affects: How appraisal-based constructivism and basic emotion theory can coexist. Perspectives in Psychological Science. 2007;2:281–296