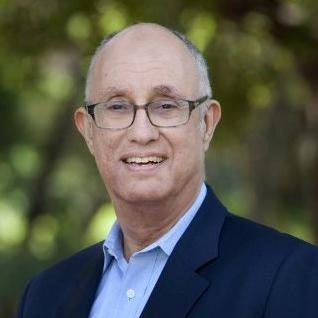 Jeffrey Pfeffer is the Thomas D. Dee II Professor of Organizational Behavior at the Stanford University Graduate School of Business. His interest in human resources, organisational theory and behaviour has led him to reflect on the nature of leadership and leadership training. He has written about evidence-base management in Hard Facts, Dangerous Half-Truths, and Total Nonsense: Profiting from Evidence-based Management (2006) where he dismisses popular business wisdom in; leadership, strategy, change, talent, financial incentives, and work-life balance, often touted by consultants and training companies in favour of hard decision making based on data and facts.

In Leadership BS (2015), Pfeffer eschews what he sees as the usual platitudes in Leadership theory and training, for a more realistic view of the world as messy and complex. He exposes what he sees as the nostrums, stories, fictions, anecdotes, promises, glib simplicities, bromides, romanticism and myth-making feel-good nonsense that passes for Leadership training, his solution being realism. The aim is to reject the normative wishes with evidence and the realities of the workplace.

Unequivocally, he claims that the Leadership industry has not only empirically failed, with study after study showing workplace discontent, but also that it contributes to that failure. As the cult of leadership has risen, its perceived effectiveness has fallen. Bullying, stress, discontent are the norm and he presents a huge amount of evidence to show repeated failures in so called ‘leadership’. What he uncovers is an almost wilful avoidance of evidence, measurement and data. Despite the $20-$40 billion spend, the results are depressingly disappointing. He goes as far as suggesting that the very construct of leadership, as presented in much leadership consultancy and training, was invented as a simplification to deliberately obfuscate the real complexity of the workplace.

His arguments against ‘Leadership training’ are pretty damning. Many who offer leadership consultancy and courses have never led anything and if they have their track record is rarely one of substantial success. In fact, he sees too many compensation consultants and linked to leadership industry and many with a woeful lack of actual expertise & knowledge. This leads to glib advice and recommendations that peddle inspiration not the realities of management. They often rely largely on storytelling and anecdote, and rarely include evaluation as part of the process (apart from primitive happy-sheet course data and self-evaluation). The leadership industry is therefore wholly unaccountable.

In the content he finds stories and anecdotes (as opposed to evidence) that are exaggerated, even fabricated. They also conveniently ignore actual successful leaders that don’t fit their neat model. These myths are counter-productive as they produce cynicism in employees. The rhetoric is not matched by actual action and behaviour. Worse, those who don’t conform to the out-dated leadership model don’t get promoted and may even get fired. Others, such as women and certain cultural minorities, that value modesty and collaboration, can also suffer.

A further critique centres around precise leadership qualities or. They are, he thinks, wrong-headed, as they focus on attributes not action and decision making. Given that the book was published in 2015, he was prescient in identifying Trump as a typical product of the charismatic leader cult. He played the leadership game and won. Pfeffer therefore punctures the idea that ‘modesty’ is an admired and effective leadership trait. He draws on Maccoby’s book The Productive Narcissist (2003), and his own evidence, to show that modesty, far from being a virtue, stops managers from thinking for themselves and being resilient in the face of adversity. It is energy, confidence and dominance that gets them where they are, not modesty. The Leadership industry may be holding back women and other potential managers by promoting false promises, such as modesty. He also accuses HR and talent management companies of being dishonest here in training for these qualities then recruiting the very opposite.

He also question that staple of leadership courses - authenticity - as a quality for leadership. He flips this to show that good managers need to do what people need them to do, not what they as managers simply want to do, not pander to their own views of themselves. Flight attendants, shop assistants, sales people and many others don’t operate by being totally ‘authentic’, neither do managers and leaders. He describes the “delicious irony” of leadership trainers who “train” people to be “authentic”, as if it is a trait that can be acquired in a classroom. Being authentic, is for Pfeffer, pretty much the opposite of what leaders need to be.

Much as trust would seem to be desirable in leadership, it may not be that simple. Bernie Madoff inspired ‘trust’. Trust, like faith, can lead one into real trouble. It may be desirable not to trust lawyers, competitors and politicking managers. True objectivity and realism may only be the result of not trusting everyone to tell the truth within an organisation, as you will be misled, even duped. You need to be on the mark, alert to deception, moves, protecting the organisation and that means distrusting some people.

Rich in real examples of leaders who were less than ideal, he shows how leadership training misses the mark most of the time – especially with the titans of tech; Steve Jobs, Bill Gates, Jeff Bezos and Larry Ellison. Political, sports and other leaders get a similar treatment. Most of the positive examples turn out to have serious flaws. So, when we look at what are called successful leaders, they turn out to be very different from what the leadership industry tells us. His recommendation is to get serious on the research, mainly what is effective, then hold so-called 'leaders' to account - not with happy-sheet nostrums but real accountability. It is not that he promotes immodesty, being inauthentic and telling lies, only to recognise that leaders and employees are people and that human nature always wins out. The remedy is to identify what you need from proposed leaders and then to make sure that they perform to those measures. This is where HR and remuneration committees fail. They pretend to be doing this when what they actually do is pander to an outdated cult of leadership, based on outdated concepts of the nature and value of leadership.

Pfeffer’s challenge is to recognise reality and accept that the workplace and people are much more complex than the feel-good training courses suggest. In reality, leaders’ behaviours are often at odds with those of the organisation. Their interests in terms of rewards, promotion and progress are often at odds with those they manage and even the organisations they lead. There is a lack of definition, theory and practice around the concept and it often distracts from the real needs in workplace learning.

He recommends that you:

·      Build your power base relentlessly (and sometimes shamelessly)

·      When the situation demands change—adapt

It is not that leadership training is wrong, just that getting things done requires trade-offs and tough decisions. The danger is that organisations handicap themselves by training leaders to embrace utopian behaviours and avoid bold decisions, innovation and the realities or organisational growth.

The fundamental problem outlined in Getting beyond the BS of leadership literature (2016) is to confuse ‘ought’ with ‘is’. Just because you think something ought to be the case doesn’t mean it is. In fact, conformation bias tends to produce the wrong solutions in this area, driven by moral and not organisational imperatives. The division of leadership into good and bad traits is a mistake, as it uses a problematic approach to human nature and ignores context. Quoting Machiavelli’s The Prince (1532), he says it is sometimes necessary to do bad things to achieve good results. Leaders need to be pragmatists.

Maccoby, M., 2003. The productive narcissist: The promise and peril of visionary leadership. Broadway.