Teachers' TV is a turn off 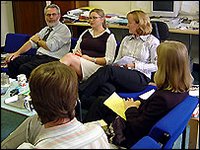 Viewing figures suggest TTV is a turn off. So says article in The Guardian today. Well, well, what a surprise. The independent MORI poll shows that it's "failing to reach the majority of its target audience...".

Teachers can't use digital television
A problem, it seems, is that "the channel is difficult to reach". The channel is somewhat down the channel listings (it's hardly going to be next to the prime time options) and teachers don't know how to get to it! In other words they don't know how to use multi-channel television. Coming soon - a one day INSET course on 'How to use your remote control' from the Teachers Training Agency.

Dull, dull, dull
Andy Schofield, an excellent headmaster who knows more than most about the use of technology in schools, hit the nail on the head, "even when our own kids are on it I can't be bothered to watch it". It's dull, dull, dull. The image top left is typical - lots of really dull discussion - most of it feels like the cheap TV it is, or a bad school lesson.

Ill-fated choice
This initiative was an easy option for the DfES, a home for lost souls from the BBC. Poorly researched, it should have been piloted like a real comedy programme (that's closer to the mark than you think). This was a rushed policy decision, backed up by old-fashioned views on media that has wasted millions and has failed to reach its intended audience. At £20 million a year the cost per unique viewer is astronomical.

Interestingly, the internet downloads, available at all times have been the one success story, which begs the question, why use linear TV when the internet gives this so-called busy audience 24/7 access. You're working in the wrong medium guys. Haven't you noticed that even the BBC are scurrying to reshape themselves as an online provider? Ditch the channel and put the whole lot on YouTube or Google Video.
at September 19, 2006

You touched on one of the key advantages to Teachers TV - the ability to download. The other one is the fact that you can use the clips for educational purposes without fear of copyright. I know from my work at the TDA that many other archives have copyright restrictions and that limits their value for those of us who use video clips for training/presentations. I have yet to watch a Teachers TV programme on TV but I do carry downloaded clips on my iPod and PDA. By the way Donald you were right when you said about 2 years ago, when we last met, that I would get an iPod and I was wrong to say that the audio/video features of my PDA offered an equivalent. They do not - I have a video iPod and it offers a wholly different and additional set of options. Tim

Your last point's a bit weak - it is an online provider! Almost all (like, 95%) of the programmes are on the website to stream or download. You don't get that with the BBC (or YouTube or Google Video)...

I suppose my point was that iot's called Teachers TV and was conceived by the very many BBC staff that now inhabit the Dfes as a TV channel, not an online entity. It owuld have been far better to have created a wholly online entity at a lower cost with better and more varied media content.

I am a teacher. Yes, teachers often complain about not having "time" because that is often the case! Those not in education don't have a true understanding of what it takes to be a teacher (an effective one at least). I have spent 7 years in school obtaining degrees to be an educator. That said, I make less than $20 an hour. I spend professional days evaluating assessments, attending meetings, and planning instruction. In addition, I spend a great deal of time over holidays developing instruction, assessing student work, and attending professional development activities. If you count in this time (which is not included in our contracts), then teachers make a significant amount than $20 an hour. I am contracted to work 7.5 hours a day, and that is without a lunch break. We eat lunch with students and work with students during "planning time". I work late nights and weekends in order to complete requirements for my job. When I do have time over the summer to relax, I know it is well deserved - and I am not paid enough to forego time to relax.

It is difficult for teachers to do one more additional task, because we are already over-burdened with so many!

You might think it seems funny that I had time to reply to this post, but I came across it while completing work for a class and I couldn't resist!

The 'time' issue is an interesting one for teachers. I don't doubt that teachers are committed and spend a lot of extra time, but the fact remains that most professions do not have the extended holidays that teachers enjoy. The existing time could also be reduced if more online assignments and automated assessments were used, a subject on which I give regular talks. Note also, that I am not some outside observer, as I have taught, spent a considerable amount of time in schools and know the problems.