2008 predictions: The geeks shall inherit the Earth 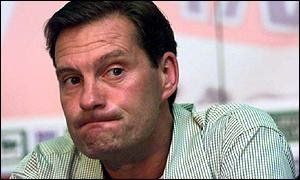 As Glen Hoddle once said ‘I don’t do predictions, and I never will’. That was before he found God (what a pass that must have been). He’s now predicting the return of Jesus and the Apocalypse. Standing on the shoulders of the giant Hod, I’ll start by saying I won’t do predictions for learning and e-learning (well maybe just a couple), but I will for Technology.

Why?
The educational, pedagogical, training theorists and practitioners ran out of steam a long time ago when they decided it was OK to hang on to 50 year old theorists (Gagne, Bloom, Rogers, Maslow, Kirkpatrick), dodgy theory (learning styles, right and left brain, NLP) and poor practice (classroom, break-out groups). And by the way, has anything even remotely useful come out of all of that EU research into e-learning. This side of the input equation is all washed up and eing pulled into the 21st cetury by the technology and consumers.

It’s the technology stupid
What has driven e-learning IS technology. The deep driver is, of course, the internet with Google (in the widest sense), Wikipedia (wikis in the widest sense), mobiles, laptops, iPODs, P2P, video sharing, social networking and dozens of other smart things on the web that have made all the difference. But it’s consumer hardware and software that’s winning the IT war. Users are buying it, using it at home, bringing it into work and corporates will have to respond.

Belated 10 Predictions for 2008
Education will continue to stagnate with enthusiastic amateurs doing the best they can in their schools and colleges, moodling away

Bought two solar panel chargers for my kid gadgets (£25 each) – they actually work, so I hope for their sake that this technology becomes dirt cheap

Death of at least one Rolling Stone

Dear Mr Clarke. Love your blog, which I found when I was Googling 'Neuro linguistic programming' Agree with everything you say about nlp, in particular with the extended post and 80-odd commments in Dec 06.

However, and for the very same reason I am concerned about NLP, I am not so sure about what you say on Wikipedia. Wikipedia comes up first in Google search for NLP, as it does in searches for many other strange subjects which do not normally find their way into reputable journals, unless as the subject of some pseudoscience review.

The reason is not hard to find. If you go to the NLP page on Wikipedia, or to the many sub-articles on that subject, and look carefully at the edit history, you see it is the same small set of individuals editing, all of whom are accredited NLP practitioners, who have a commercial interest in presenting this strange subject in a positive light - particularly a light that presents NLP as an academic subject or science.

This would not happen in academic literature, where contributions have to be refereed by someone without a vested interest in publication (admittedly the academic system is open to abuse, but it seems to work in the long run).

You will find there is a lot of this stuff in Wikipedia. Again, not hard to explain. Pressure groups, vested interests, fringe sexuality activists, cults, all that kind of thing, have a strong interest in promoting their view for free, in a way (top Google ranking) that would normally be very expensive. Those who do not have a vested interest do not bother.

Given this, it is a little inconsistent to extoll the virtues of the world's #1 internet encyclopedia, yet berate Neurolinguistic programming (or any other pseudocientific cult or fraud). It seems the two go very neatly together.

Interesting point. However, if you type NLP into Google, Wikipedia comes us as the first entry, which is better than all of the strange NLP vendors that appear after it on the first search page. So far, so good. Within Wikipedia, search NLP and you get Natural Language Programming and several other articles unrelated to Neuro Linguistic Programming. That’s also good start.
The first page on NLP (Neuro Linguistic Programming) in Wikipedia, contains the following, fully referenced paragraph:

“In the mid 1980's research reviews in The Journal of Counseling Psychology[8] and by the National Research Council (1988; NRC) committee[9] found little empirical basis for the claims about preferred representational systems (PRS) or assumptions of NLP, marking a decrease in research interest. While the title Neuro-linguistic programming implies a basis in neurology, computer science, and linguistics and it is often to marketed as a new science, skeptics contend NLP is an "unproven psychological theory or treatment"[10][7] and one of the many pseudoscientific[11] or New Age forms of psychotherapy that have emerged in mental health practice.[12] Few practitioners have presented their clinical data for peer-review and most have had little interest in empirical validation.[13]”

Further on, under Psychological research and reviews, there’s a large section showing that there’s no real supporting evidence for NLP. I personally welcome this approach. It’s not Wikipedia’s job to ignore topics. It is its job to tell us what science says on the subject. In other words, Wikipedia references the scientific literature.

A good reply, and there is a long and a short answer. Since this is a comment box, I'll give the short one, which is to look at the NLP article as it was at the end of 2005. I would supply the link but I know from experience it will be too long to go in the comments browser. You know how to find that version, right?

The article begins ''Neuro-Linguistic Programming (NLP) is a collection of self-help recommendations, promoted through the popular psychology and self development sections of bookshops, and advertised in various media including the Internet and infomercials'. Shortly afterwards it says 'NLP is based on New Age principles such as the belief in unlimited potential through access to the subconscious, and body language cues derived from the observation of “therapeutic wizards” (Bandler and Grinder 1979; Sharpley 1984).

That to my mind is a better way of characterising NLP than the present introduction. You note that Sharpley's work is referenced right at the beginning. Now it is buried in the middle where it is hard to find.

There is much more, but enough for now.

I agree that there has been a bit of a tusssle but that is, perhaps, a feature of Wikipedia.

I looked at the History and Discussions - tells the full story of this tussle - which is one of Wikipedia's strengths.

I, personally, like the way the battle is being played out in public between science and faddishness on this one.

In this respect Wikipedia is not an Encycopedia of proven fact, but an encyclopedia of fact and beliefs wher a more dynamic view of knowledge is taken.

Of course, but we shall see shan't we! There is a lot more to say.

Meanwhile, thank you for the post last year. I particularly liked this:

Tony: "Personal attacks do little to constructive debate; it actually shows you for what you are. The short description of yourself on your blog simply adds to my assessment of your personality."

Clarke: "Wow, you can't have it both ways. If you don't like personal attacks why follow the first sentence with one! "


Personally I have hated NLP ever since it was imposed upon me on some corporate training session in 1998 or whenever. They use words like 'behaviours' in the plural and the whole thing is very sinister and Orwellian.

I think this debate is interesting as it tests these boundaries. NLP is out on the edge of Wikipedia's knowledge base which makes it a good topic for this type of debate.

The debate is around the difference between the 'representation of knowledge and belief' and 'canonical knowledge'. The whole concept of an 'encyclopedia' has perhaps shifted and there seems to be many more types of knowledge repsitories - academic journals, books, traditional academically mediated encyclopedias, Wikipedia, blogs etc. The danger, is confusing one for the other.

I have a lot of good things to say about elearning with wikis in particular. Not public wikis. The latest research concludes that Wikipedia is full of inaccuracies, and breaks IP all as a default (unethical plagiarism, and unethical whitewashing articles especially evident on the NLP article).

Wikis are handy when you have a natural community (football team sized and global). Its the natural size for good productive learning environment also. OK its not rocket science, you just add ideas, track progress through the history, search for ideas, and discuss stuff. But its sensible use of tech.

However, I challenge anyone to try to clarify a financially interest site such as Wikipedia nlp article. The administrators are protecting it. Its a sorry sight. The psycology article is fine and states things as psychologists would state them. The NLP article states things as NLPers would have to state them if they are under scrutiny. I mean its so obvious. Look at the main contributor;

According to his blatant userpage Action potential runs an NLP company called Comaze.com, and its blatantly obvious he (a chap obviously called Scott Coleman) is pushing NLP, and indeed, is trying hard to whitewash NLP even on the psychology article

Technologies such as Wikis are great when you have sensible people using them. But when you have Wikipedophiles deciding to abandon duty of care over slander, misinformation, financial promotion, then you end up with a global misinformation system. Wikipedia has basically been discredited as a hive of cranks and perverts. Its not surprising though, Jimbo Wales’ previous project was Bomis Babes, one of the other main promoters of crankery and child porn. When you have such dismissal of ethical consideration, of course you end up with pseudoscientists unleashed on wikipedia. They feel welcome there. Its set up for people like that. Its elearning for learning how to be a crank.

Hi Don - thanks to your blog, I feel I've had a slow-motion coversation with you throughout the year. While trying to marshall my thoughts about 2008 and 2009, I came across this post, which both stimulated and amused me. You're very close to target in most instances - but with only a couple of weeks ago, Mick, Keith and Ronnie (who's probably the biggest cause for concern these days) are proving at least one of your predictions wrong!

Nearly right with Keith who almost killed himself falling out of a coconut tree! Ronnie seems to be trying the eternal youth trick. Mick may be imortal.