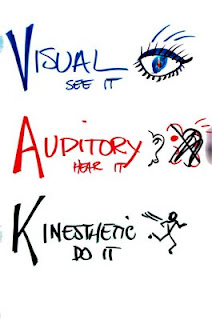 In this detailed, large-scale study, published in the Journal of Kinaesthetic Education (174-76 p64 2009), the VAK learning styles theory was put through its paces using 600 GVCSE students split into; a control group (no identification of learning style), along with selected Visual, Auditory and Kinaesthetic learner groups. The control group of 150 received normal teaching, and the three other groups of 150 received teaching in their dominant style. The results are fascinating.

Kinaesthetic group
The kinaesthetic group were blindfolded and had earplugs inserted to focus their psychological attention on the learning tasks through touch alone. In English they were introduced to Shakespeare by feeling a plaster bust of his head, then asked to imagine a poem and short story, followed by recitation from memory, beyond this no real progress was made. On Mathematics there was some success with identifying 3D objects by hand alone, and in simple arithmetic, counting balls in and out of bags. However, numbers greater than 20 were beyond their kinaesthetic ability along with all 2D maths including negative numbers, decimals, averages, square roots, algebra, angles, measurement, trigonometry, probability and data handling. Students in physics did well in feeling the effects of energy transfer and static electricity shocks, but on electronics, forces, motion, waves, the earth, radioactivity, light, sound, and particles, no significant progress was measured. Results in Chemistry showed the greatest improvement where students were asked to feel the difference between gases, liquids and solids, but struggled with the Bunsen burner experiments. After several health and safety incidents this part of the trial had to be curtailed. ICT scored highest with keyboard skills showing some improvement but even with touch-screens nothing could not be read, so scores were generally low in all other tasks. Music was the lowest scoring subject as the students only had hands-on vibrations to go on. This proved to be an insurmountable barrier to learning. Touch rugby was played, although passing proved to be difficult. Asked to internally visualise their performance in their own minds, significant improvements were reported in ping-pong, the shot-putt and javelin, although the javelins had rubber balls added to their tips to prevent accidents.

Auditory group
The auditory group were blindfolded but not allowed to use their hands and sense of touch. In English, audio books proved useful for novels, short stories and poetry but there were disappointing results in reading and writing. In Maths, mental arithmetic was improved but in all other areas there was no measurable learning. The sound module in Physics showed most improvement but electronics, light, forces and every other part of the curriculum, were unteachable. Chemistry benefited only from the recognition of the hydrogen test, where a lit splint goes pop in a test tube. ICT showed no significant improvement, and even audio was of little use as the students could not see that the mute icon was on. Physical Education lessons were a challenge, but teachers ingeniously played football by inserting a bell inside the ball.

Visual group
The visual learners had earplugs inserted but were not allowed to use their sense of touch. In English the visual learners outperformed the other two learning styles; this was attributed to significant effect of being able to read and write. Maths performance was fine, but teachers struggled to cope with sign language to communicate feedback to students. In physics, the sound module was impossible, but in chemistry and biology, only the impossibility of hearing the teacher was a problem. Music could be read but not played. Physical Education could be performed but the inability to hear the ref’s whistle led to some indiscipline in team sports. Not being able to touch each other meant that rugby had to be abandoned.

Conclusion
The researchers concluded that students who were taught using visual learning would do well, despite the lack of auditory cues from their teachers, and that the addition of hearing and touch would almost certainly provide further educational benefits. Students taught using just an auditory or kinaesthetic approach are likely to significantly underperform in almost all subjects, apart from music and pottery.
at March 21, 2009

Shouldn't you have waited until 1st April to post this?

Well, I know this is obvious, but unless children have a sight or hearing impairment they will always pick up visual and auditory information even when taught a primarily kinaesthetic approach. And deafblind people who only have their sense of touch can learn fine, with the right adaptations.

When we talk about an auditory or kinaesthetic approach or whatever, we're just talking about focusing on increasing those stimuli. We don't mean blocking off the others. There is no such thing as "just" an auditory approach in real education.

I don't think this study is that relevant or useful, largely because e.g. for the kinaesthetic group they had no opportunity to access written material, and I'm unsure if they had any means to access language (e.g. use of deafblind manual alphabet). If for some reason you decided to actually teach pupils like this, you would teach them to read a system such as Braille or Moon.

Similarly for the auditory group, in reality they would be using a screen-reader and would not have the same problems described in the study. For the visual group, if they and their teachers actually knew fluent sign language, they would probably have had fewer problems.

I mean, do we really need a large-scale research study to point out that if students can't access writing, they will make less progress, and that pupils who can't hear will struggle with music?

The study's fundamental flaw is that it did not enable different groups to access the same information but in different ways. To mean anything, it should have adapted materials and procedures in the way they would be modified for students who are deaf or blind and have no use of their hands, or deafblind students (and yes I know that would be difficult to do). But even if it did that, I think its relevance to classroom practice is very small. In the end, all it proves is that we all use all the senses we have available to take in information and learn, and that it is difficult to compensate for the loss of a sense without specific training and adaptations. Which I think we already knew...

What if I had read this on April 1st?

Your "study" shows the absurdity of the whole learning styles movement. Thanks.

Donald - have you got a link to that article? Mark's right - I can't find the Journal of Kinaesthetic Education on Google or on the Open University electronic journals list.

On rereading I am embarrassed that I took this seriously! Nice one ...

LOL. But I do miss your comment on this. is this a serious research? Do you take this serious?

I have to admit I concur with Rose on this one. The new findings makes sense, and are what one might figure when thinking logically. Yet logic today has different meanings to different people.

I believe that the biggest barrier to understanding and learning something is the belief that it's already understood and learnt. For those who are fanatical about VAK and what they think it might offer, these latest research findings are going to be hard to accept.

What's unbelievable is that some people missed the obvious.

I suspect this research is fascinating, but I understood very little because I'm a taste learner. Could you reprint your post on something edible, preferably chocolate?

Sorry Cathy - I'm far too heavily involved in a current research project on the 'smell learning styles' approach. Some significant data emarging in cooking and the outer eraches of chemistry, but not much else. As research goes, it stinks.

Enough already. You're a little bit too convincing for some of us!

Cathy, your comment made me laugh out loud in the middle of a meeting. Thank you so much!

Actually there are tribes in southern Houziwhatizstan who have developed a very complex learning style based, as Don Diekneite has pointed out, on taste and smell. They have amazingly found that if a training theory smells like guano AND tastes like guano, it is probably guano. However, because their culture has not yet embraced e-learning (or electricity), it was impossible for the University of Worcestershire to test the valildity of this ancient learning style.

Hello, Donald. Have just been alerted to this: