The Class – a class act 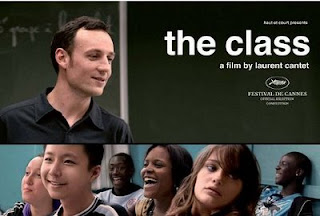 French film ‘Entre les murs’ has for some reason been translated as ‘The Class’ and it’s a harrowing look at education in a French school. It’s the first French film in 21 years to win the Cannes Palme d’Or and is only bettered in its forensic examination of education, in my view, by the fourth series of The Wire. It tears into the a system that is falling apart around the ears of pupils and teachers alike, a system that is stuck in some sort of strange time warp.

Many films fall into the romanticising of education, whether it’s the Harry Potter public school genre or Dead Poets Society movies that portray teachers as superheroes. Few face up to the contemporary problems that The Class relentlessly explores. We experience nothing in the film but the claustrophobia of the classroom, staffroom or tiny concrete playground. The camera never leaves the school premises and the physical environment squeezes in on the pupils, teachers and occasional visiting parents. The school, like a prison, creates its own culture and conflicts. It is doomed to be a source of friction between all of the participants.

The pupils are far from being compliant learners. They’re feisty, questioning and don’t really see the point of the antiquated literature and teaching they’re expected to unquestioningly learn. Crushed into a tiny room, shoulder to shoulder, they’re a tough bunch to control. At the same time they’re full of life, charming, witty and certainly not stupid. The film lets the action run for nearly an hour without much in the way of narrative or plot, a brave thing to do, but it gives depth to the characters, which is the film’s strength. The kids are not mindless idiots and the teachers are not uncaring moaners or inspirational geniuses. The problem is quite simple; The Class – the claustrophobic class, is an artificial environment where people are forced to do things they don’t want to do, and inevitably clash. It leads to a tragic denouement with one of the pupils being expelled over a linguistic misunderstanding.

The film focuses on the language of learning, and classroom claustrophobia things I’ve blogged on before. The kids are eloquent about the things they know and love but monosyllabic about the things they’re being taught. Teaching seems to make them clam up. The exception is when they’re given the opportunity to express themselves on computers, using pictures they’ve taken on their mobiles. In other words, use the media they know well and they’ll flourish.

The acting, given the age of these kids, is superb and the director ping pongs between teacher and pupils to create a sense of real dialogue, conflict and sometimes respect, even admiration and love. At times it’s very moving. But don’t expect to walk out of the cinema feeling good about schools – it’s quite depressing in its analysis of a game that is almost designed to grind out to a long, drawn-out, nil-nil draw. Everyone’s gets on everyone else’s nerves. The staffroom talk is excruciating, and no doubt real. The kids go to school to watch the teachers work and the teachers grind away in a zero-sum game, where most of those in the class will not really make much progress. It’s heartbreaking to see the quiet girl, almost invisible for most of the film, comes up to the teacher at the end of the year and says she hadn’t understood anything.