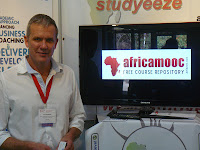 On this view MOOCs are a godsend for Africa. Free, they have the potential to reach vast audiences who stand no chance of getting anywhere near higher education as we know it in the developed world. On the other hand, as the Namibian President wisely said at E-learning Africa this month, let’s not make the mistake of following an overly academic approach at the expense of Africa’s vocational needs, what he called the 'spectacle of hallucination'. African MOOCs will have to be more relevant to Africa’s vocational needs, such as agriculture, healthcare and entrepreneurship. A third view, is that Africa needs to produce as well as consume MOOCs. Absolutely.
The bottom line is that the simple idea of making and making use of relevant courses, made free (or cheap) and accessible to millions of young Africans, is as good an example as any of Africa leapfrogging a Western Higher Education system that has proved slow, cumbersome and far too expensive. The last thing Africa needs are $20-$40,000 per year undergraduate courses.
Africamooc
‘Africamooc’ is alive and kicking, aggregating and hosting MOOCs. Jens Schneider, a wonderfully enthusiastic Namibian says, “If your course is free, we host for free”. This is a useful service as Jens understands the real needs and contexts in which MOOCs could be used in Africa. Aggregation and reuse is a start, a good start.

Entrepreneurship MOOCs
An example of a relevant vocational MOOC is Jim Vetter’s LIFE, a not-for-profit funded MOOC for entrepreneurs from all over the world, with many in Africa. He uses a MOOC to develop small businesses, especially tech businesses. Lessons learnt? Use a pedagogy for a range of literacies, make it multilingual and make content available on  a range of devices. He also uses learners to help develop content, as they know a lot about troubleshooting in their own, local environments. Stories are important, as are JOLTs (just in time learning tools). What was needed were practical, skills around start-up costs, fixed costs, variable costs, profit & loss, cash flow and so on. For this he uses free, open source spread-sheets with P &Ls etc. He delivers in English and Spanish, and soon in French and Arabic. This is important as 202 countries have logged in so far and it is widely used throughout Africa. I also likes his free ‘facilitator guide’ downloadable from the site.


Tanzanian IT MOOCs
Even more relevant to African needs is the World Bank funded Coursera initiative to provide market-relevant IT skills in Tanzania, where jobs are going unfilled due to lack of relevant IT skills. Tanzania’s problem is not unusual in Africa where talented students go abroad to study, leaving the country bereft of high-end skills. They hope to match IT MOOCs to local employment needs by involving stakeholders such as local IT lecturers, businesses and entrepreneurs. This is promising as it pays attention to local culture and context.

African perspective on MOOCs
What’s now needed are a few home grown MOOCs from African institutions. They need not be universities. Gertjan van Stam has spent a long time in deep, rural Africa, in Zimbabwe and Zambia, and has some revealing insights into MOOCs in Africa. The African perspective on MOOCs, he feels, should be different. Take the rural or traditional African perspective on the subject and you see things through different eyes. 71% in his village use the internet for education in deep rural villages. In his village role models emerged, such as the woman who went online to get a Degree in Divinity and became an important member of the clergy. His children use Khan and BBC Bitesize for maths, His wife, a doctor, is doing a MOOC on mobile health. Most education not accessible to the poor, so MOOCs are a real educational opportunity.
However, he says that Africa must transmit and not just consume MOOCs. There’s a real need for MOOCs in indigenous languages, sensitive to Africa’s oral tradition.  Content in just western languages is hampering progress. Even worse, it may strengthen colonial thought. He wants MOOCs ‘contextualised for Africa’ and sees them as an opportunity to ‘send an African knowledge to the world’. What does this mean? Ubunto – ‘my humanity is linked to your humanity’, Orality - used extensively in Africa, where instant discourse influences everything. He’d like to see MOOCs provide more long-term educational content that ‘withstands rampant individualism’, especially in the Africa where the short-term is unpredictable. This is fascinating and opens up the possibility for MOOCs that are far more oral, immediate and useful than using or repackaged western courses.
Conclusion
When these people presented their visions for African MOOCs, it was disappointing to hear predictable responses about drop-outs, certification and quibbles about the history of MOOCs. This is to apply old narrow narratives to something entirely new and disruptive. This was in stark contrast to the visionaries, who were actually doing real work, on real MOOCs, with large numbers of real learners. We needn’t worry. The digital genie has escaped from the Ivory Tower and caught the imagination of people who really care about access. Thinking of MOOCs in Africa makes you see the potentials for escape from the dominant and oppressive western model of Higher Education; remote, inaccessible, expensive, elitist and overly-academic. I wish them well.
at June 13, 2013

currently mentoring a kid from Africa myself. With little money and access to technology, open education is really only part of the story. Some kind of more 'offline' open education seems quite necessary to me as well. At least for the years ahead.

I am also trying to find out how to get to his 'base'. I need to know how to start mentoring him, so I ask about interests, knowledge of using the Internet, #hours per day online, costs, etc.

Open education sure is a different thing in his context.

Very interesting post about African MOOCs. For me, a step very important to develop this practices is first enable computer accessibility and ITC learnings. (without missing internet access...).
Digital divice is very important in Africa and i try to weaken it with my NGO for digital solidarity projects.
(www.e-nexus.net)
Thanks for your informations.