Oculus Rift: consumer release – what & when?

So, Facebook bought Oculus for $2.3 million - $400 million cash, $1.6 billion Facebook stock and $300 million on Oculus meeting financial targets. What next?
The DK1 blew me (and almost everyone I showed it to) away. The DK2 has had them smiling, gripping, swaying and screaming. The consumer release is imminent. Brandan Iribe claimed that the launch is near and most commentators see it in 2015, May or November. The DK1 was good but was relatively low resolution, with a slow pixel refresh rate giving motion sickness. The DK2 was better with higher resolution and the motion sickness seemed to have gone but a more limited field of view. Then came Crescent Bay, a step up from the DK2.

Development Kit 2 has an OLED screen with higher resolution 1920×1080 (960×1080 per eye) and 6DOF (3-axis rotational tracking + 3-axis positional tracking). This additional tracking, helped by an extra, external sensor allows you to lean down to pick things up and lean round corners.
The Consumer Version will have an OLED screen but we don’t quite know what the release resolution will be, but it will be AT LEAST 1920×1080.
Sound
Built in headset with 3D sound is what Oculus are after. In demos I’ve seen so far the audio adds lots and massively enhances the experience and emotion. With 3D sound the idea is that sounds can be placed by the designer anywhere in the 3D space you’re in or dynamically in relation to the position of your head. This stuff will be a real headf**k, especially in horror games, which are already shaping up to be THE genre of choice for the Oculus. I can see the music industry responding with almost live experiences. I showed the Oculus to Lawrence Bell (signed Arctic Monkeys) and he sees its poetantial.
Controllers Oculus bought Carbon Design Group, who created the look and feel of the Xbox 360 controller and original Kinect camera. They had been working together for some time, so the die is now cast, with Oculus likely to come out with their own controller. A games controller works fine and the Xbox 360 is as good as you get. You can zip around at a fair old lick.

But the next step is to get something like the Razer-Hydra in place, where you can grab, lift and manipulate objects in 3D space. I’ve tried this and it works fine, Trouble is, they’re no longer in business. Something will come along here, especially with some haptic feedback.
Treadmill

For those who want to walk and run through environments, there’s the Virtuix Omni, the omnidirectional (love that word)  treadmill with a bowl shaped platform, special low friction shoes and a safety ring.
Backpack VR 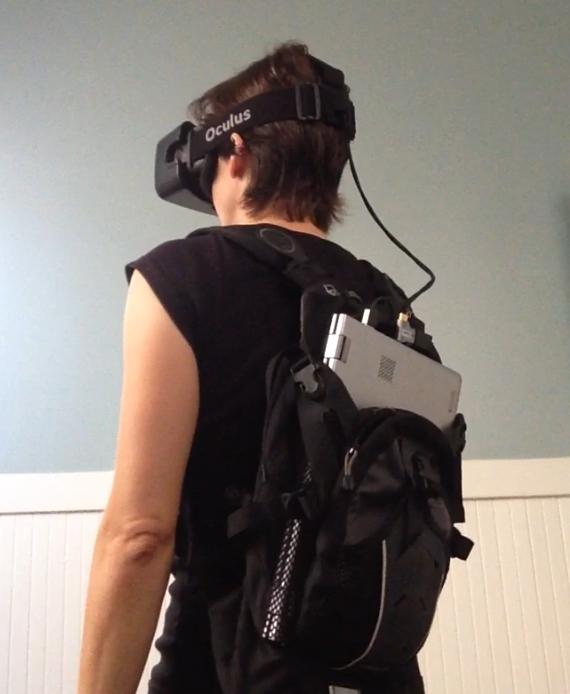 With the kit on your back, you are untethered and can walk around an open space (and play zombie games.) Companies like VR Backpack provide an Oculus Rift headset with a powerful PC and hand controllers/gun peripherals. VR backpack’s latest (Version 3) uses the Oculus Rift DK2, WebVR software platform, and ultrabook laptop. An interesting problem here was getting the computers to work with the lid closed!
Conclusion
My interest is in educational applications but VR is a medium, not a gadget and there will be inroads into entertainment (film & TV), Games, healthcare and art. The Oculus Rift (and Galaxy Gear VR) is only the start of a move from 2D to 3D that will revolutionise media.
at December 02, 2014

I wish to complain that you have not sent out a Christmas round up of all the 'great things happening in L&D this year'. Instead we get a man dressed up in scuba gear that would create havoc with the Xmas decorations as he careers around the office or living room dressed up as a virtual frogman.

Seriously, you need deep pockets and a serious need to deploy this kind of solution. Some of the examples you describe in previous posts about OR/VR could be done as effectively using stills and a strong narrative. Not so sexy or as realistic, but within the budget of a lot of punters.

Hi Rob
Just glad that the people who train the pilots who fly the planes I take didn't abandon sims for stills and 'stories' ;) Not big on the round ups - all seem to say the same old thing. You have a point about my VR obsession - it was just the most interesing things I've seen all year. In practice most of what I've been up to has been raising money for adpative learning then winning work in same area, designing a spaced practice tool not deployed and working in L&D, work on a Wikipedia tool that takes any page and turns it into an active learning experience and loads of other stuff. Thanks for the prompt!

And thank goodnes your new stuff's not about: 'resources not courses/curation/communities of interest' - things that anyone who has any idea about how people learn should have been promoting years ago.


I take your point about the really necessary use of Sims/VR - I was being a little facetious.

Could you do more on Wikipedia tool please (if confidentiality allows it)?

Also, could you do more of the old Clarkian iconoclasm on the blog in 2015? I read most of the blogs to keep up to date with thinking , but they're all getting very samey and safe.

Thanks a lot for sharing this amazing knowledge with us. This site is fantastic. I always find great knowledge from it. VR Walking Platform