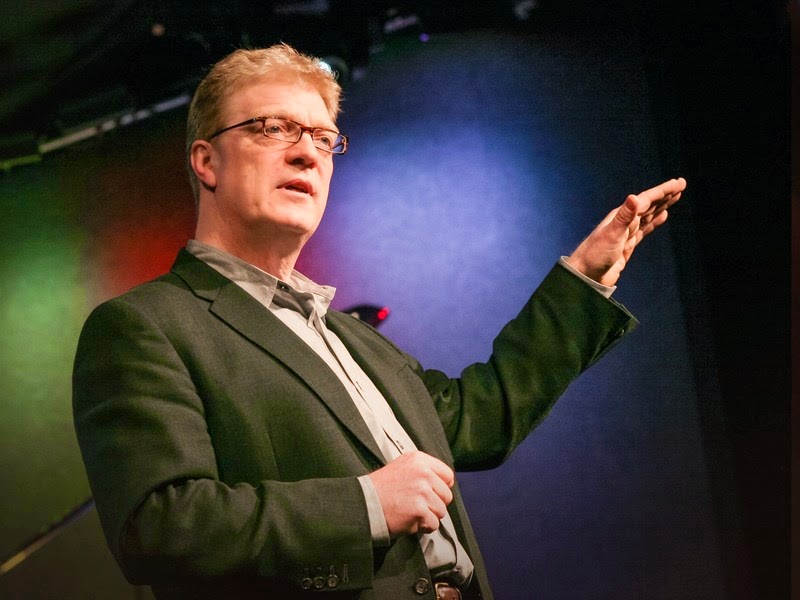 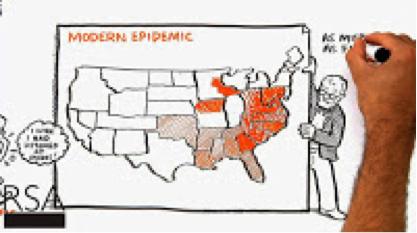 Robinson blatantly uses data selectively and edits a graph is his memorable ‘Ritalin’ image from the RSA Animation talk at 3.47.
Compare Robinson’s graph with the true source here: 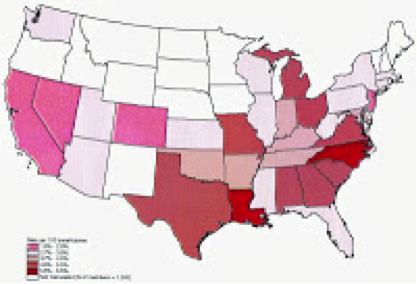 Robinson’s graph has no legend and he’s recalibrated the white states to look as if there’s zero prescriptions. With this data you have to look at the source to understand that the white areas represent states that did NOT participate in the study or did not have reported prescription data. It’s a distortion, an exaggeration to help make a point that the data doesn’t really support. This is a specific lie but the main problem with Robinson’s more general propositions is that there is no evidence or data at all.
Conclusion
So often in education, shallow unsubstantiated TED talks replace the real work of researchers and those who take a more rigorous view of evidence. Sir Ken Robinson, is the prime example of this romantic theorising, Sugata Mitra the second. Darlings of the conference circuit, they make millions from talks but do untold damage when it comes to the real word and the education of our children.
Bibliography
Sawyer R.K. (2012) Explaining Creativity Oxford: Oxford University press.
De Bruyckere, Kirschner & Hulsof (2015) Urban Myths (Learning & Education) pp77-81
Rietzschel, E. F., Nijstad, B. A., & Stroebe, W., (2006) “Productivity is Not Enough: A comparison of Interactive and Nominal Groups in Idea Generation and Selection”. Journal of Experimental Social Pschology, 42, pp. 244-251.
Kudrowitz, B. & Wallace, D., (2012) “Assessing the Quality of Ideas from Prolific, Early Stage Product Ideation”. Journal of Engineering Design: Special Issue on Design Creativity, 1-20.


Nemeth C. J et al. (2003) The liberating role of conflict in group creativity. Institute for Research on Labor and Employment.
at April 08, 2015

I love that you give us the critical view of things. It's really helpful to see this type of analytical thinking about things that we may otherwise take at face value.

You make a good case refuting Ken Robinson brainwashing, but are the studies you mention valid? If so, what makes them so?

Oh Donald - you do enjoy being controversial I want to reply to this more fully and may need to write a blog post in response. If I do get time them I will post a link here.

I agree what he says is not a new idea. I think it pity to link him with Mitra though, which I see as quite different.

Agree pretty well on what you say about creativity and the paper clip exercise (yes have been there myself in a awful session). That is another story for the blog perhaps. "Not all education should be creative" - yep ok! Does Robinson ever say that it should be? If so I have missed that.

I find myself in an odd position that I agree with a lot of what you say BUT I do think that Robinson serves a very useful purpose for many teachers and educators and does more good than harm. Of course any speaker can picked apart and I think most people use statistics, charts and graphs to make their points - including the drugs companies (especially the drugs companies - I have some experience there from someone inside the industry). So ADHD - is it real or how many cases are just bored kids with weak teachers and poor curriculum driven by assessment?

I could not disagree more with you mostly unsupported attack on Robinson, Mitre, and a learning vs teaching pedagogy. Assuming that I will not change any minds here regarding the case you've laid out I'll simply focus on the conclusion.

Re: "So often in education, shallow unsubstantiated TED talks replace the real work of researchers and those who take a more rigorous view of evidence. Sir Ken Robinson, is the prime example of this romantic theorising, Sugata Mitra the second. Darlings of the conference circuit, they make millions from talks but do untold damage when it comes to the real word and the education of our children."

The "real work of researchers?" Surely Robinson and Mitra didn't get invited to give TEDTalks on the basis of their good looks. They are both accomplished individuals. In Mitra's case he won a TED Prize to further research his ideas. Robinson has authored several well received books.

And where oh where is this evidence of "untold damage?" You provide none.
Robinson makes a simple claim in one of his TEDTalks, "We have built our education systems on the model of fast food." I agree with him, so "BRING ON THE EDUCATION REVOLUTION."

I have written extensively on the evidence re Mitra - even visited the hole-in-the-wall project myself. http://www.planblearning.com/Articles/Hole-in-wall/ I alsolaid out many arguments in this piece. Your argument seems to come down to "they were invited, they must be good". But giving a ED talk is not enough - see this: Study of successful TED talks (what works : dress, first impressions, voice, hand gestures etc.) http://bit.ly/1Fs4dmW

Your picking the low hanging fruit here by being critical of Robinson's TEDTalks[s] and not his books.
TEDTalks are brief 20 minute overviews of complex topics and by there nature are designed to leave the listener wanting to find out more. Can we be critical of Antonio Damasio's entire body of research into consciousness, or his two books on the topic, based of his TEDTalk? Not in any meaningful way. Can we judge whether Daniel Kahneman should have won the Noble Prize base on his TEDTalk? Of course not.

If one was to analyze this commentary with the same rigor being apply to analyzing Robinson's ideas one might say that the objections here are neither new or sufficiently argued, and stop there.

Robinson's talk did accomplished something, he has millions of people talking and thinking about education.

So, I've put you right on Sugata Mitra. In other words, I did my site research and reading. You seem to assume that this one post was the only thing I've ever written on these subjects but you're wrong. On Robinson, I have read his books, unlike the vast majority of his TED viewers. You seem to ignore the fact that 1) the post posits a number of pieces of research, way beyond that of Robinson, that shows the weakness of his position 2) I fnd the books weak on reseach and also somewhat shallow. Too many assumptions mate. When you say my post is 'unsupported', I wonder whther you've actually read the post. It has citations and my argument about his faking the graph evidence is fully supported. You may be a Robonson fanboy/fangirl, but read what was written before making accusations.


Donald,
You're jumping around here and not addressing my concerns. Let's take one thing at a time; "where is this evidence of "untold damage?" It remains "untold" here. What damage?

Sorry but it's you who jumps around. So far you haven't presented one argument, one piece of evidence or research and clearly don't read what I write. I have written extensively on this subject in the blog since 2006, explaining why 21st C skills based on abstractions, like 'creativity', are misleading. Do some reading, present some arguments, quote some research - do something other than state crass slogans in CAPITALS like "BRING ON THE EDUCATION REVOLUTION."

I dont read Robinson as being for creativity per se but for a more flexible mode of educational delivery. Not everybody should be required to hit the same way points in education in lockstep. You reference Emile by Reauseaux. This is a bit of a straw man argument. You should also look at the Work of Rudolf Steiner or Maria Montesori. Both of these educators follow an alternative approach closer to Robinsons thinking, and both systems have active school communities with many thousands of effective graduates.
Mathematics is a seperatte issue, and I would strongly contend that imagination is a key component of mathematical thinking at any level beyond routine computation.

I have read and written on both Steiner and Montessori - they're on the sidebar of the blog. I have no doubt that flexibility is a virtue. But I don't ghink that repeating the mantra about 'creativity' is helpful. I've fought all my life for a balance of the vocational and academic and haven't found the Robinson line useful. It makes education sound woolly on policy. On maths.... well that'sa complex issue - but trite statements like 'imagination is a key component' is not useful.

One small-ish thing I find bizarre is the way Ken Robinson turns reality on its head by depicting a belief in the importance of IQ as being the popular and prevailing view in todays's world - which he's brave enough to criticise.

The reality - of course - is that almost no-one really dares talk favourably about IQ in public these days (people lose jobs, careers when they do!), and fairly weakly-supported ideas like EQ and Multiple Intelligences are popular instead.

The heroes today are the people who question today's orthodoxy (as you have done!), and present something richer.

I heard Robinson more recently and fortunately the poorly-evidenced utopianism stuff was rather tempered by some more complex thinking that wasn't too bad.

I guess we have to sort the wheat from the chaff, with Robinson... ;-)