Will Apple be biggest watch company in the world?

Scott Galloway, of NYU Stern thinks that Apple will be the biggest watch company in the world. He may be right - they've, surprisingly sold out on release.
But a watch is no longer a watch, it’s an accessory, a piece of jewellery. It has long lost its role as a timepiece, by top-end vendors who market them as often unnaturally large and shiny, status objects. They’re not stupid these vendors. Neither are the people who research and study this stuff. They know exactly what a watch IS and what it is NOT.

Not a timepiece
Wrist watches were developed for military watches, synchronised actions, and moved to mass consumer status at the end of the First World War. But they quickly became status symbols. A watch is NOT a timepiece (that is merely a trivial piece of functionality). A watch is an ACCESSORY. It is a piece of jewellery, something that speaks to others about you. My son has an expensive watch, that shows the mechanical workings of the timepiece. He has to wind it up to make it work! He doesn’t care. It’s the look that counts. It’s unnaturally big, glitzy and looks expensive. Acoording to Scott Galloway and Geoffrey Miller, he’s saying “mate with me, I can afford this, even though it’s functionally useless”.
Binary choices
Scott Galloway of NYU Stern University studies this stuff and has some answers. (Watch this video - it's worth it).Why do young people queue line up round the block to buy Apple products? Teenagers don’t have big income but they still buy luxury goods such as phones, and watches. They want the best and the middle stuff won’t do. He thinks that consumers are over-messaged, so they take binary choices. It’s low-end or high-end. The middle is not the place to be. So we see luxury brands soar and cheap supermarkets thrive.. “Beautiful, ornate items make us feel Godlike” he says. Rich people are boring and predictable – they all aspire to and all buy the same things – the same few, high-end brands. But there’s another, bigger game in play….
Buy this – get laid
At the instinctive level, we think it makes us attractive to the other sex, says Galloway, ” these are basic and eternal human instincts – these have not gone away.” What does a watch brand say about you? Watches and phones have long been indicators of that basic instinct – procreation. The top watch brands say, “If you mate with me I’m more likely to look after your offspring than someone wearing a Swatch Watch.”
With phones, Blackberry failed because it said, “you’re a middle-manager going nowhere”.  Similarly with Nokia, which lost its early mojo. Being bought by boring Microsoft made it worse.
And it’s not just watches and phones, it’s cars and shoes. Men buy fast sports cars that can’t be legally driven at their designed speed to appear sexually attractive. Women, says Galloway, buy “ergonomically impossible shoes to solicit inbound offers form those same men”.
This is the position, elaborated by Geoffrey Miller in ‘Spend– Sex, Evolution and the Secrets of Consumerism’, who uses evolutionary psychology to explain the allure of the luxury brand. Luxury is about propagation. Miller makes a good point about all of those luxury ads in glossy mags and at airports showing all-too-good looking folk holding their wrists in surprising positions bearing a ridiculously expensive watch. He claims that these ads are not aimed at making you buy the watch. They’re aimed at the people who already have the car, bag and watch, to say ‘you’re above everyone else’. It’s not about aspiration, it’s about confirmation. Until you see the Apple Watch get that smart in advertising, it will remain a gadget.
Apple Watch as luxury brand?
Galloway, therefore, believes that Apple will be the biggest watch company in the world. Why? They’re a luxury brand, own the value chain and can redefine that market. I am not so sure. Here’s why…
1. Glasshole effect 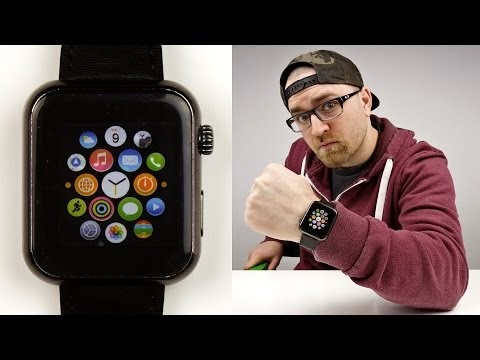 Google Glass, according to Galloway, screams, “you will not conceive a child as no one will get near you”. I’ve tried it and you get a feeling in your gut that says “this is just wrong’. Apple’s Watch is in that territory. It may recover but after the initial lukewarm reviews and worrying pictures of geeks wearing gifts, you’ve lost momentum and it’s hard to recover.
2. Still a gadget
A technology has to transcend gadgetry. It has to be more than one-upmanship in the gadgetry game. It has to become a new medium. VR is not a gadget it’s a medium. The Apple Watch still looks like a gadget.
3. Difficult to use
Apple used to excel at - buy, open box and use products. This takes too much time to learn – witness the steep learning curve mentioned in this new York Times review. That means it will frustrate all but the technically inclined.
4. Speak to your watch?
It uses Siri as input but no one like speaking to their watch in public. Even in private, it’s a geekish stretch.
5. Rotten Apple
Apple has played the status card by launching the $18,000 gold version. This sends a bad message, that tech is not a decentralised, disintermediated democratic movement but a status brand. Apple don’t want to push this too far or the fruit will rot.
6. Mobile still king

The problem with the watch as wearable is its rival the mobile. Anything the watch can do, the mobile does better. And if you need your mobile to make your watch work, what’s the point? You’re using the same hand to use your mobile as your watch. One interferes, in terms of signals, with the other.
7. Reverse a trend
You have to convince a generation who either don’t wear a watch (as they have a mobile) or wear a watch as jewellery. Why bother? This is reversing two trends that are well embedded.
Conclusion


The classic error is to stay within the paradigm of the ‘wristwatch’. Wearables are likely to break free from the old concepts. Apple have successfully positioned themselves as a luxury brand and their stores and marketing ooze class. But this doesn’t seem right. Then again, they have sold out and a sure sign of sucess ifs the fact that fakes are already on sale in China ......
at April 11, 2015