Teachbots - are Robot Teachers are inevitable?

Sure to make most educationalists and teachers splutter with indignation, robot teachers (or at least teaching assistants) may not be far off. I wrote a piece Robot teachers five years ago, and have been following to progress ever since. Teachers will always be with us but can robots extend and enhance learning in the home and classroom? The point, in the short term, is not to replace teachers but to replace the teaching of SOME TEACHING TASKS. Cheap, consumer tech, with brilliant AI and UX software point towards a future where robots will have the affordances necessary for this role.
You already use robots
Robots already play a major role in your world. At any given time you are likely to be wearing, watching, listening to, eating, driving, flying or using something that has been partly made by robots. They are already your manufacturing servants. Why? In some tasks, they outperform humans in precision, consistency, endurance, strength and speed. The lesson is clear. When robots can perform a task more precisely, consistently and with greater endurance and speed than humans, then, given reasonable manufacturing costs and social acceptability, they will be used. Robots have now started to emerge in education and learning.
One-to-one promise

In terms of learning theory that backs up the possibility of robot teaching, let’s start with some research. Bloom is famous for his taxonomy but, in my view, his more substantial contribution was his famous paper, The 2 Sigma Problem where he compared the effectiveness of the lecture (conventional), formative feedback lecture (mastery learning) and one-to-one tuition (tutorial). Taking the straight lecture as the mean, he found an 84% increase in mastery above the mean for a formative approach to teaching and an astonishing 98% increase in mastery for one-to-one tuition. Google’s Peter Norvig famously said that if you only have to read one paper to support online learning, this is it. In other words, the increase in efficacy for one-to-one, because of the increase in on-task learning is immense. This paper deserves to be read by anyone looking at improving the efficacy of
learning as it shows hugely significant improvements by simply altering the way teachers interact with learners. Online learning, in the widest sense of the word, promises what Bloom called ‘one-to-one learning’, whether it’s through self-paced structured learning, scenario-based learning, simulations or informal learning. This points towards the future of learning as being individual, personalized, one-to-one teaching, if possible.
Human-all-too-human
So what about research that backs up the use of robots? Nass & Reeves published a remarkable book The Media Equation: How People Treat Computers, Television and New Media Like Real People and Places. They completed 35 experiments to show that people confuse media with real life. This conclusion shows that we have a disposition towards suspension of disbelief when interacting with most media, to see media as having human dimensions. It’s hard-wired. The conclusion we can draw from this, and I did when designing online learning programmes, is that learning experiences, if delivered in a suitably human manner (not necessarily by real humans) can be successful. The key is that learning experience must conform to certain social and physical rules. If we can deliver learning as if it were being delivered by a real person in a realistic way, it works. What Nass & Reeves researched was the role of simple physical and social rules. We respond to politeness, avoiding unnatural pauses, flattery, don’t like harsh judgments and so on. These are the things that we expect in dialogue. If this can be created through robots, AI and good UX, we will will have come a long way towards the one-to-one tuition that Bloom shows is the most effective way to teach.
Design
There is one more dimension to robot learning that matters – design. Donald Norman laid the ground rules for successful technology, the touchstone being its ‘invisibility’. This is true ergonomically but also true of interfaces, which need to be cognitively ergonomic. Norman saw our emotional responses to design in terms of:
1  Visceral (appearance)
2  Behavioural (performance)
3  Reflective (memories and experience)
Interestingly he thinks Americans value 2 more than 1&3, whereas Europeans, at least the cultural classes, value 1&3. He claims that different people buy things with different fuel mixtures of the three emotions. Different companies design to different types of emotions. Great companies, like Apple, deliver all three. As he explains in Living with Complexity, it is not that technology delivers too much complexity. The fact is, we live in a world of complexity, with complex technologies that do complex things. Live with it – that’s reality. The enemy is not complexity, it is dreadful design. Complexity needs to be tamed, masked or made invisible with good design. This is precisely what robots are starting to deliver – great design that makes the mechanics of learning invisible.
Robots meet AI &UX
Most great technology is a combination of technology The iPhone is a cluster of existing technologies where the sum is greater than the parts. Brian Arthur, in The Nature of Technology, thinks that this is an essential feature of technology, the coalescence of existing technologies to create something exciting and new. This is what makes the confluence between robots and AI so exciting.
With adaptive learning (AI in learning), where what the robot delivers (using algorithms) is always in response to who you are, what you know and what you do, we get somewhere towards the necessary one-to-one, personalized and more human-like delivery necessary for robot teaching. Remember also, that machine learning, the ability of the robot to learn, even learn on the back of aggregated data from many learners from a network of robots, could see rapid progress in effectiveness. These adaptive systems are already here. I work with them in real educational institutions with tens of thousands of learners.
Search, speech recognition, gesture recognition, touch screens, text to speech, automatic translation – all of these are now available and only getting better. They are being be embedded into robots. Speech recognition is the big leap but some are also taking advantage of touchscreen interfaces on the chest of the robot. With sensors, movement, balance, vision and hearing, these robots are getting pretty serious.
Early experiments


We’ve had simple robots that allow teachers to teach from a distance in rural schools. The Nexus Academy of Columbia allows teachers to Skype in and control this robot from their computer, going up to student’s desks and checking work. 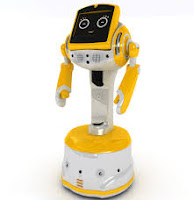 Robosem is a Korean Robot used to teach English. It takes a hybrid approach, either using a real teacher via teleconferencing or through autonomous, adaptive  lessons that use speech recognition and motion tracking. There are many of these examples but we are now seeing some serious commercial activity. 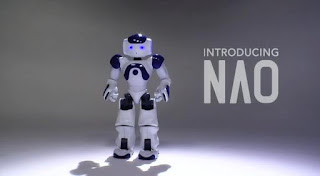 Time to introduce NAO, now used in education in 70 countries. You can teach NAO and NAO can teach you. This is nowhere near the dream I’ve outlined above but it’s a start and it works. With speech recognition, NAO will call you by your first name, teach your child multiplication tables, wake you up, monitor your home if you’re out. NAO will be able to recognize members of the family, your friends, judge moods, know your preferences. This is just one of a slew of early robots that will eventually find a role in education.
Pepper

Now let me introduce Pepper with it’s four microphones, two color video cameras, 3D sensor, touch sensors, bump sensors, lasers, sonar, and gyros positioned in the head, body, arms, and legs, voice recognition and a touchscreen on its chest, with wifi. This companion learns from its environment and draws from it’s cloud-based, updated, master algorithms. It has emotion recognition reading visual expressions and from speech tones. Price: $1900.
Applications
The ‘cute’ factor is the current focus, as these are aimed at young children but the long-term goal is much bolder. I see the first advances in early literacy, numeracy, simple programming, as well as second languages. I also see real applications for children with autism and other differences in learning, where the pressure on parents is immense and the needs often different from traditional classroom learning. Children with autism have been shown to respond positively to synchronised behaviour from a robot. This is used to move the child on to other types of social interaction. Robots have being used to with autistic children using mimicry to establish trust.
Looking to the future, check out this amazing example of robots teaching other robots. Berlin researcher Luc Steels, has developed the robots that learn, speak to each other and speak back.
Beyond this we have Google investing madly in AI and robotics, with Deepmind, created by a learning expert (here for some background to relevance to learning). Google was the obvious buyer for this type of company, as it thinks in terms of deep, basic problems, looking for generic solutions. Google has the eyeballs, brains and behavioural traits of billions of humans. They have the data that matters. This means they can apply Deep Learning solutions on scale. But they’re not the only game in town. IBM’s Watson is set to deliver AI on tap, Microsoft are using AI in their services and the Chinese search giant Baidu are all hiring, buying and experimenting.
Conclusion
As Stanford’s Nass & Reeves showed, we need teaching and learning services to at least appear to be friendly, patient, efficient, polite, relevant, relevant, personalised and…. well social and human. Parents spend hundreds of millions on one-to-one tuition for their kids. Much, much more is spent on teachers and teaching. Robots can give unlimited amounts of attention and help, in ways no teacher, or even parent, can. Robots don’t get hangovers, don’t take holidays, never discriminate on grounds of gender, race or accent. They’re patient, scalable and consistent. Wouldn’t it be wise to pay attention to something that takes at least some of the pain away?
at July 03, 2015