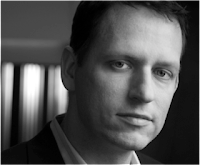 I like Thiel, as much for the fact that he speaks from a position of success when he taks about business but also that challenges assumptions, especially on Higher Education. As the co-founder of PayPal and first outside investor in Facebook, he has since invested in many companies including LinkedIn and Yammer. He describes himself as a conservative-libertarian and espouses original views on business, social structures and education, that many find, if unpalatable, certainly interesting.