My attempt at 2500 years of learning theory, tries to uncover the major historical movements and influences; the Greeks, religious leaders, religious zealots, enlightenment, psychoanalysis, pragmatists, behaviorists, cognitivists, instructionalists, online theorists and others. But there may be a new kid on the block that transcends all of this. This is a computational ‘learning’ theory, fed by a confluence of biology, computer science and maths. The overall point here is that computation is no more about computers than astronomy is about telescopes. Computation takes place in many different types of system. It may unlock the very secrets of evolution and human behavior. It is a BIG idea, a VERY BIG idea. But let’s go back a little to the roots of this strain of learning theory. 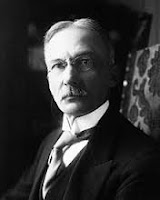 You’ve probably never heard of James Mark Baldwin, yet he turned out be one of the greats in learning theory. A 19th century psychologist, he introduced what is called the ‘Baldwin Effect’ into evolutionary theory. The idea is that learned behavior, and not just environment and genes, influences the direction and rate of the evolution of psychological and physical traits. The mind is a learning machine and it is the various aspects of this ability to ‘learn’ that may have had driven evolution and our success as a species. The Baldwin Effect places ‘learning’ on a larger theoretical canvas, lying at the heart of evolutionary theory. It is no longer just a cognitive ability, albeit a complex one, with many different systems of memory, but a feature that defines the very success of our species. This is a profound and radical idea. Note that this is not Lamarckism, as it does not claim that acquired characteristics are passed on genetically, only that the offspring of an adaptive trait (physical or psychological) may be genetically better at learning. This creates the opportunity, as it creates the conditions and successful population survival, for standard selection to take place.
Growth of Baldwin effect
The Baldwin Effect has some impressive supporters including Aldous Huxley and more recently; Hinton, Nowlan, Dennett and Deacon. Evolutionary psychology has had a profound influence on the resurrection of the idea. Daniel Dennett is one theorist who posits the Baldwin idea that learned behavior, especially sustainable innovative behaviours, if it is captured in substantial genetic frequency, can act as what he calls a ‘sky crane’ in evolution. Hinton and Nolan revived the idea in 1987 in How Learning Can Guide Evolution and Richard Richards who published Darwin and the Emergence of Evolutionary Theories of Mind and Behaviour in the same year. They generated enough interest for John Maynard Keynes to support them in a article published in Nature in the same year.
But it is Daniel Dennett who has done most to popularize the idea in Consciousness Explained (1991) and Darwin’s Dangerous Idea (1995).  Weber and Depew have since published an excellent explanatory and supportive book Evolution and Learning: The Baldwin Effect Reconsidered (2007). Deacon proposed that the Baldwin effect accounts for the rapid evolution of the mind and language. As Wittgenstein showed, a private language makes no sense as meaning is use. As soon as a small number start and continue to develop language skills it confers significant adaptive advantage and confers a real runaway advantage to the users. This ability to learn new skills may be the key to our species having moved beyond fixed, genetic determinism. More than just language, adaption to new environments, responding to climatic, food pressures and other changes that require quicker adaption through selected learning, may have played a role in the rapid success of Homo Sapiens. Dennett proposes the actual creation of selective pressure on others by sustained learned behaviour. This is where it gets interesting for technology.
Technology
Significant advantages could have been through the relatively rapid learned ability to create technology, namely the production of tools. Technology scales the ability of its producers, owners and users to avoid predation, become better predators through hunting and fishing, protect its owners against climate (needles, cloth, clothes), use fire and preserve food. Technology is the real runaway success, especially technology that allowed us to create social groups in which learning, in the sense of teaching and learning, could thrive. My favoured flavour of the Baldwin Effect, is therefore the runaway success of learning to make things, namely the production of tools and technology. This may be the cardinal, causal factor that the Baldwin Effect bestowed on our species. Note that our species Homo Sapiens, was not the only species to thrive on the success of tools and technology. All other hominoid species did so, only not with the same levels of success. The history of tool making shadows the history of our species and gives us a window into the development of consciousness. The trail of stone tools is often as significant as the fossil bone evidence. Our advantage over our nearest rivals, the Neanderthals, seems to have been based on superior minds, tools and technology.
The Baldwin Effect gives ‘learning’ cardinal status but learning technology, the product of learning how to teach and learn takes over. One can go further and claim that learning, especially the development of cognitive systems such as episodic memory, gave the production and use of technology a privileged status. So technology itself, through various network effects and now networked learning, has taken this to new levels. It may even transcend our very notion of what we currently see as intrinsically human.
Computational ‘learning’ theory
In an interesting twist Hinton and Nowlan claim to have demonstrated, through computer technology (simulations) that learning could shape evolution. The Baldwin Effect, may, through its own efficacy have created the technological conditions for its own proof. The brain, through consciousness, may have created a fast developing structure that in turn accelerates learning and thus evolution. Beyond these simulations, something even more astonishing has emerged. In our age of algorithms, computer scientists and the AI community have come up with deeper theories of learning that look at the algorithmic root of learning. Leslie Valiant won the Turing Prize (Nobel Prize in Computing) in 1984 when he identified the conditions under which a machine ‘learns’ new information. He called this the PAC (probably approximately correct) model. More recently, in his 2013 book he uses this same theory to encompass evolution itself.
From algorithm to ecorithm

In the process Valiant invented a new word ‘ecorithm’, an algorithm that runs, not just on a computer but any system, even a human or biological organism, to learn within a physical environment. We have now taken the Baldwin Effect down into the realm of mathematics. It is here that biology and maths collide, bridged by computational theory. We have seen remarkable advances in Ai and machine learning, with computers displaying the ability to learn very complex tasks. This has huge implications in terms of 'learning theory' in itself. However, machine learning is only one small part of this effort, it is ‘learning’ itself which emerges as the primary phenomenon.
We have assumed, thus far, that learning is a biological phenomenon. But when AI and machine learning emerged, the definition of learning had to become more elastic. Learning itself has become an object of study. Evolution itself may be a learning system, one that results in more effective biological entities.
Valiant’s insight was that we are a product of two things: evolution and learning and that there must be a theory that encompasses both. We evolved and learn through interaction with the real world. Is there an underlying theory that explains both? His point is that there may be no fundamental difference between intelligence and artificial intelligence or machine and non-machine intelligence.
Computational psychology
The implications are huge. As we expand the domains in which we see 'learning' as critical, computers, evolution - any system that reacts with the world, we see the possibility that some core algorithms may lie at the heart of all of these systems. This is exciting. We may be on the verge of uncovereing the laws of learning. Psychology, far from being limited to observations of behavior (behaviourism), experimental testing (cognitive psychology), or molecular investigation (neuroscience)) suddenly becomes a mathematical problem. Computational psychology slips in between cognitive psychology and neuroscience to provide possible insights about learning, based on algorithmic scripts. Watch this space.
Bibliography
Baldwin, J. M. (1973). Social and ethical interpretations in mental development. New York: Arno Press.
Dennett, D. C. (1995). Darwin's dangerous idea: Evolution and the meanings of life. New York: Simon & Schuster.
Dennett, D. C. (1991). Consciousness explained. Boston: Little, Brown and Co.
Weber, B. H., & Depew, D. J. (2003). Evolution and learning: The Baldwin effect reconsidered. Cambridge, Mass: MIT Press.

What you describe is around for close to 50 years under the name of mathematical psychology. Admittedly things have moved forward, but it is at least in my eyes not a 'brand-new' field of research.

You missed something here Joerg. I claim it started earlier, in the 19th century. The reason Valiant got the Turing prize was for his breakthrough work and a unified 'learning' theory is relatively new - the framework published for the first time in his 2013 book. We're talking about different things.

This reminds me of this from NS-J "Welcome to the world of automation, in which learning belongs to the machines now."

I went off on a tangent looking at some of this as part of my studies - this book is quite interesting although it uses 'culture' instead of 'learning' http://www.press.uchicago.edu/ucp/books/book/chicago/N/bo3615170.html

One nitpick - humans are not the only mammals who have sophisticated learning and what I would call culture - eg Orcas have quite sophisticated methods for passing on the hunting skills of particular populations which are not inate, and can only be learned over many years. Also they have what appear to be 'cultural norms' against incest - although it might just be an evolutionary fluke. Like us ;)