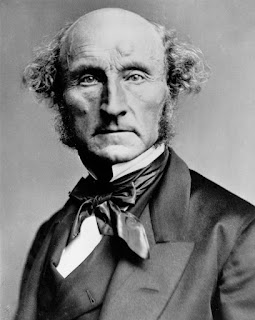 John Stuart Mill saw education as a means to the end of achieving happiness for the individual and happiness as a whole. Hot-housed as a child, and educated by his Scottish father the philosopher John Mill and Jeremy Bentham, his Godfather, he was kept apart from other children, reading Greek and Latin at age 8. As a teenager he suffered from depression, which he in part saw arising from the intensity and isolation of his education. He felt as though his purely rational education had not allowed him to develop feelings such as sympathy and appreciation of the real world. Finding Wordsworth helped him overcome this tendency to immediately rationalise and analyse the world.

He was one of the most significant intellectual figures in England in the mid-nineteenth century, as a philosopher, politician and economist. He also played a significant role in the advancement of women’s rights.

As an empiricist, he saw sensory experience as the raw data from which all else arises, even logic and mathematics. This meant he saw the mind as a tabla rasa, ready to be filled with sensations that lead to all manifestations of consciousness and thought. It is the scientific approach making inductive inferences from experience that should be used to build a view of education.

His associationist psychology meant the association of small pieces of data, sense data or feelings, to form our view of the world. This came from Locke, Hume and Hartley and forms the basis of his empiricism and belief in the strength of the scientific method.

From his Godfather, Jeremy Bentham, he saw Utilitarianism (1863), expressed in the formula ‘the greatest happiness for the greatest number of people’ as an empirical theory based on the observation that this is what all people actually desire - happiness. This is not to say that one should pursue one’s own happiness at the expense of others,as the greater good is a sure source of happiness for the individual. Although he did believe that some forms of happiness were higher than others and , unlike Bentham, saw feelings as important guides in moral, aesthetic and other judgements.

Utility is intimately connected with liberty and in On Liberty (1859) he is keen to press the idea that one cannot infringe upon the rights of others to pursue their happiness, unless their actions cause ‘harm’. State and social control were to be resisted. As they infringe upon the development of the individual. This debate around freedom of expression is still relevant today, along with the ‘harm principle’ and influenced his views on education.

Education was the means to attain true happiness, not in the simple sense of hedonistic pleasures but the higher forms of happiness. He refused to believe that most learners were innately incapable of being fully educated. In his Autobiography, he was also critical of the idea that one should only teach what learners enjoy, as this appeals to a primitive view of the lower pleasures of ‘fun’ and prevents access to the higher pleasures and happiness of subtler, elevated subjects. This hinders rather than helps learning as it prevents the learner from reaching their fullest potential and happiness. Above all education should teach children to become autonomous being and and to think for themselves.

Education should have a strong moral purpose, to overcome the selfish pursuit of pleasures at the expense of others. Moral education must encourage the capability of appreciating that the happiness of others, the greater and common good, leads also to the happiness of the individual within that society and culture. The taking on of public duties and active participation in society and democracy was important.

In On Liberty (1859) he proposes compulsory, universal education for every citizen, including women, all the way up to University entrance. Although he was critical of the idea that such education should be provided by the state, as that could result in compulsory coercion and control, which was counter to his views on freedom and liberty. One notable example of his aversion to education coercing learners, was his view that religion, as a subject of opinions, should not be taught in schools.

In The Subjection of Women (1869), he calls upon his utilitarian and libertarian principles to defend the emancipation of women from the social pressures to conform to what men think. Women are forced to lead less happy lives because they are not free to pursue their own happiness, almost in a state of slavery. Here, he also called for the abolition factual  slavery.

He makes the case for absolute equality, especially in the freedom giving process of education that would give women, as citizens, freedom and independence.

Mill’s influence has been immense in politics, notably his ideas on freedom of expression and liberty. He is still read and quoted at length on these issues to this day and these issues in education, especially in the campus culture clashes, are still with us. His influence on education is not via his purely empiricist views but his appeal for compulsory, universal education was realised, at least in the developed world, along with the inclusion of women, especially in Higher Education. Mill played a key role in the latter.

His focus on happiness also influenced the recent rise of positive psychology, through Seligman and others, although much of that debate seems to ignore the deep and sophisticated interest taken on that topic in the 19th century.