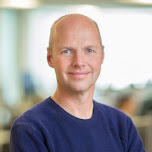 Sebastian Thrun is a Research Professor of Computer Science at Stanford University, a Google Fellow, an expert in AI and self-driving cars. As one of the original MOOC evangelists, his first MOOC course, in 2012, on AI, attracted over 150,000 students, with some novel pedagogic techniques. However, in 2016, he resigned from his position as CEO of Udacity in 2016, as it swung towards vocational subjects.

Thrun ran an online course with Peter Norvig in 2011, while at Stanford, “Introduction to Artificial Intelligence.” Within a few months, student numbers had surged from 58,000 to 160,000. But it was Salmon Khan’s TED talk that convinced Thrun that scale was possible and so Udacity was formed in February 2012. Udacity is a play on the word Audacity, designed to reflect student ambition. Pearson VUE provided a paper credential, for employers, at a small fee.

In 2013 Thrun claimed the Udacity has a “lousy product’ and it became obvious that both the pedagogic and business models did not work, so Udacity pivoted towards meeting real demand in vocation courses such as IT, healthcare and business. The company swung sharply towards a demand model, which was vocational in nature, with VOOCs (Vocational Open Online Courses), where the aim was to acquire a skill or skills valuable for employment. I

In 2014, Udacity offered the first MOOC degree, with Georgia Tech and AT&T, a $700 Master’s Degree. In 2015 they offered Nanodegrees and Nanodegree plus, paid for courses. Udacity is now worth in excess of $1 billion.

Following the mastery model, where one allows the learner to get to mastery in their own time, researched by Bloom (Norvig was a fan), the early MOOCs allowed the student to learn at their own pace, with a focused on problem solving, rather than straight exposition, lectures and quizzes. Another innovation was the hand (not head) writing on a whiteboard, which Thrun claims came about by accident. This was a more innovative use of video, avoiding talking heads in favour of  a hand, drawing and writing on a whiteboard, sequences. They also tended to have more of a formal, quality driven approach to the creation of material, with more crafted and challenging assignments, problem solving and various levels of sophisticated software-driven interactive experiences. Peer work and peer-assessment were used to cope with the high teacher-student ratios.

Thrun, as an academic, originally saw MOOCs as a scalable alternative to college courses. This was common among the academics who created the movement, Yet the real demand lay elsewhere. Once professional business people got involved MOOCs swung, rightly, towards the real demand, which was skills for employment.

The criticism of low completion rates was misplaced, as the commitment to a MOOC is minimal, sometimes at the level of window shopping, rather than a tens of thousands commitment to a college course. This type of course should not be seen solely in terms of the 18-year-old undergraduate but a much wider and older age range.

Thrun, while known as the founder of Udacity, delegated business responsibility down in 2016. Although Udacity had to experiment with course and business models, it remains a learning force in the MOOC movement, after its pivot towards vocational courses.