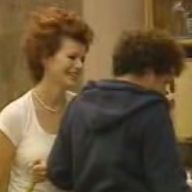 Cleo and Leo
It’s fashionable to rubbish Big Brother but it’s funny how the critics always seem to have watched so much of it. I’ve been a fan from the start.

Forget those crappy soft-skills training courses. If you really want to see social conflict, class differences, homophobia, racism, sexism and ageism in action – then watch and learn. That’s not to say it’s reinforced those values. The UK show has been won by gay contestants and a transsexual.

Big Brother’s - a workplace
TV used to be such a happy place, full of smiling faces. Now it’s getting darker, more honest, and we can all learn from this. It really does get people talking about human conflict and what’s good and bad in the way people deal with each other. In this sense the house has much in common with the workplace; the daily grind, dealing constantly with people you never chose to be with, shared tasks, people leave over time and then there’s a sometimes malevolent, sometimes benevolent master/employer – Big Brother.

Collaborative learning When was the last time someone said, ‘I saw this amazing thing on a softskills training course today’. Big Brother, on the other hand, is talked about. Collaborative learning really does take place around Big Brother wherever people congregate and socialise. Why? Because it’s fascinating to watch real people deal with problems. We watch, comment, discuss, reflect and learn from this.

More webcam than TV
It also tapped into an important idea, that this generation is different – they have less propriety, less modesty and are more open, honest and candid. Interestingly Bazalgette’s book about reality TV, Billion Dollar Game, shows that it had its roots in the web with Jennicam – remember that? It’s fundamentally a webcam format, albeit with multiple webcams, with an added gameshow layer. But it’s the watching that matters. Plots, sub-plots, relationships, villains and heroes emerge over the weeks with the kite being tugged now and again to introduce some instability, which takes it even higher.

Donald, I agree that Celebrity BB shows that TV has changed, but is it really more honest, as you say? I don't think so, just more knowing.

Performance has moved from a theatrical suspension of disbelief to one where the participants are self-consciously pretending to be natural, while in fact fully aware that the right move for the cameras will help them towards victory.

However, I absolutely agree that the house resembles the workplace - because very often at work people act just like this: saying or doing one thing to create an effect on a watching third party (usually the boss).

Not so sure that they're so in control of their actions. It's exploded today as the racism issue has become THE talking point.

The three girls are making comments, about food mainly, which they clearly don't regard as racist, while many on the outside see it as so racist that they are demanding action.

This is interesting. The boundary is being tested before our eyes on live television. This is exactly the sort of banter that goes on in the workplace every day of the week and exposing it to scrutiny must be good in the long term. It's bringing out issues that are healthy to discuss. I much prefer this to any diversity training programme. It has all the hallmarks of a good learning experience - it's real, seen by millions, debated and discussed.

Yes, I noticed the redtops today had three-inch headlines screaming about racism and BB. Perhaps you're right ... I'll check out the summary later on.

By the way, talking of diversity training, interesting use of the word 'girl' :-)

This morning’s papers are full of the BB/Racism story, after Ofcom received a record 10,000 complaints. In 20 minutes’ viewing last night I saw plenty of bullying, and hard working Bollywood star Shilpa outclassing her housemates. They have lost the game in everyway (odds of winning, image damage, BB-fuelled endorsements).

Back to the point – is watching this scrapping on TV good diversity training? I don’t think so. It produces discussion and debate, sure, but to what end?

Without some facilitation and moderation, the end could well be that viewers sympathise with alpha female Jade Goody and her acolytes. Not that adding a facilitator would necessarily improve things. It is easy to imagine how very badly a discussion could be handled – leading participants through the nose to a conclusion about bullying and racism that was utterly insincere.

In other words, BB could be useful material for a well-led, structured discussion, but otherwise is no more useful than witnessing the same sad spectacle in the workplace.

It comes back to this: how much can learning be structured, facilitated and led, and how much is it a journey of individual discovery? In the case of changing deeply-rooted behaviour like racism and bullying, I would argue that people can’t and won’t do it alone.

So men are burning effigies of C4 executives in India and people are complaining in their thousands about racism on Big Brother. Have they really watched the programme?

C4 are right not to cave in. If those who complain to Ofcom and C4 push things then it's Germaine Jackson who would be charged, as he's the only one who has utterered direct and unambigious racist remarks, when he called Jackie 'White Trash'.

This is a TV show with bite. It is making people think and it is not racism that is emerging as the main issue. Cultural differences, class differences and supposed bullying are the main issues being discussed by those who actually take the time to watch the programme. Looking at the viewing figures, that's almost everyone. Interesting that Dirk and Leo's sexist remarks went unoticed.


Cultural differences, class differences and supposed bullying are the main issues being discussed by those who actually take the time to watch the programme.


How do you know? The few conversations I have listened to seem to be at more visceral level. I like her, I don't like him. But that's a very small sample... I freely admit I have only seen very small snippets. As my wife put it - it seems like the modern equivalent of roman gladiators. No doubt you could learn a lot about human nature from watching that as well - but what was the actual appeal for the audience?

I suppose my original point was that diversity training programmes give no real insight into people from other walks of life. With BB you get a window into their world, their way of thinking and the complexity of human behaviour.

Many people have little contact or understanding of people from other classes, races or sexuality, especially in the UK, where lcass boundaries are still well defined.
At one level watching BB is simply exposure. But the programme does induce reflection, debate and opinion. You get from it what you put in.

This last week has seen every TV news programme, politics show and newspaper devote a huge amount of time to genuine debate on subtle racism and other topics. There have been many other examples of issues raised from previous shows both here and abroad.

One phenomena I find fascinating is the widespread middle-lass annoyance at the programme. It's as if working class people shouldn't be on television, a sort of Reithian moral stance of what is acceptable on TV. I personally find The Archers, Nigella Lawson and all of those 'property abroad' programmes much more banal.

I am afraid I don't watch or listen to any of the programmes you list. I don't think it is anything to do with class or intellectual snobbery. I enjoy a Bond film. The excerpts that I stumble across from BB or the Archers seem mostly boring - with the additional problem with BB that it appears designed to appeal to a side of my nature I don't want to encourage.

If BB is meant to somehow expose us to reality we should bear in mind that it is an artificial selection of people in an artificial environment. Most of all the people on it know they are being watched. I have never had to design diversity training but I think I might look "Until Death Do Us Part" or "Fawlty Towers". At least we would all have a good laugh.

I agree that the selection and environment are artificial, but so is the workplace and so is the recruitmentof people into workplaces. What makes this work is that we know they are real people and that they can't really hide their true dispositions and behaviour.

I see great parallels with the workplace (the aim of my original post) with cliques forming; often groups of similar sex/age or personality type. The tasks are great for looking at good and bad team behaviour and the tensions are similar to those that lead to common HR problems around reace, sex and bullying.

With a peak of 8.8 milllion watching it has certainly caught the imagination of a great many people. My point is that this scale of exposure to diversity isssues way outweights the efforts of largely ineffective training.

I ran a soft skills training course 4 months ago, and having just e-mailed the delegates with a quick reminder, one of them has just informed that she was talking about what she learnt on the course to a friend the day before yesterday, so yes, soft skills course can also get and keep people talking! Marilyn Devonish