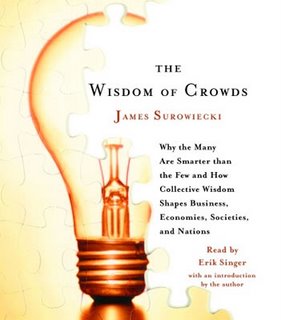 This phrase from Kathy Sierra has been bouncing round the blogosphere and it’s so applicable to the fad for learning ‘communities’ and ‘collaboration’.

The Wisdom of Crowds
If you’ve read Surowiecki’s The Wisdom of Crowds you’ll know that he didn’t mean groups of people working collaboratively. He extols the virtues of INDEPENDENCE, diversity and decentralisation in crowds. It’s the fact that they DON’T collaborate that makes them powerful and wise.

Learning 2.0 and Web 2.0 not collaborative

As for the Learning 2.0 idea, that collaborative user-generated learning and content works, we need to examine its parent; Web 2.0 content. Most people search for something they want as an individual or 'lurk' free-riding on the veiws of others. Blogs are written, by and large, by individuals, as are YouTube entries and most other forms of useful content. Even Wikipedia is written by separate individuals, not collaborative groups. It’s the independent contributions and sheer scale and searchability of the content that makes it work i.e. decentralisation and diversity.

Person as portal
When the learning folks want online collaboration, they often mean centralised, moderated, teacher-like control, the opposite of almost everything Web 2.0 has to offer. In e-learning most online collaborative environments are either empty, dead or populated by comet tails of schoolboy humour. There are rare exceptions but given the amount of time and effort that has gone into these environments the returns have been meagre. Barry Wellman, the social network theorist, explains this well. The web offers networks, not communities. It's loose, exponential in growth and most people in networks don't know who most of the others are.

Collaborative learning is slow learning
I’ve never really bought the idea that I’ll learn from a group of learners who know as little about the subject as me. I don’t force my twin son to learn French from his equally poor French-speaking brother, and am now convinced that much of what passes for groupwork in primary and secondary school classrooms is just chaos. Classrooms are not all the better for learning because they have 30 plus pupils crammed in there. If that were true we’d be increasing class sizes. And in training I’ve witnessed unbelievable amounts of wasted time and effort in breakout groups and supposed collaborative efforts. Much of the time is wasted just agreeing on who will do what and hanging around.

Ultimately, I feel that deep learning is very personal. It’s one brain focusing and giving full attention to a learning experience. Collaborative learning is often like putting your right hand over your head to scratch your left ear. It just takes too long. Sociology has infected learning theory to such a degree that we no longer pay attention to the simple fact that it’s about single brains acquiring, storing and recalling knowledge and skills. The person is the portal for learning.

Gill Salmon has written extensively about her experiences in the academic space, and our experiences back that up. Were Epic's projects with Arena all failures?

Collaboration may be natural but it is also difficult - even face to face it is difficult. People learn to be good collaborators - unfortunately often compensating for poor early experiences in our education systems. My belief is that the nascent e-learning market was hijacked by the e-course companies - both generic and custom (!?). Using technology to enable people to people interaction for learning is as important as using technology for access to static and dynamic information and knowledge.

Much of the new parts of the Internet you advocate are reliant on people-centric approaches rather than content centric. Let's look for more of this, not less.

I agree that collaborative learning has its place e.g when the objectives have a collaborative compoenent as in team building, project management, conferences, team sports, and so on.

In some cases I'd like to see much more collaboration. I'm a fan of Harrison Owen, who designs Open Space conferences with NO speakers, no fixed aganda and gets the participants to decide what they want to do with tons of topic-led debate. These Open Space events seem like a good use of collaborative effort. After all people haven't travelled all that way just to hear what they could have heard over the net. In other words, if we're going to collaborate, let's collaborate. In training, however, the collaboration is often weak and time wasting.

However, what I've observed, on the back of dubious theory from Vygotsky and half-baked terms such as 'constructivist'learning, is the dangerous and false idea that all, or even most, learning should be collaborative. Training and education, by and large, herds people into groups of between 10 and 30 and hammers stuff into them, often with inefficient collaborative components, like break-out groups.

The classic 'break-out' sessions are groups of people split up. For convenience these are people who are already sitting next to each otehr. So the front roww extroverts get together, as do the back row introverts, as do pairs of colleagues, who often sit together. There's then the painful task of choosing the leader of the group - usually the extrovert who feeds back his or her own views at the end. It's tiresome.

Your point about the people-centric shift in the internet is spot on. This is what I mean by every person being a portal. We're able to do this because we can both publish as individuals on our blogs without having to go through training magazines and publishers.

Excellent - a positive response to my challenge! What I believe we are both talking about is understanding and using the dynamics of collaboration to ensure an effective learning process. You're right, this is often poorly done even in a face to face context. I'm sure we all have bad experiences of this.

The trouble with collaboration in an online learning context is that it is often an add-on not the core of the learning process. Adding a discussion forum to online content doesn't ensure it will be used effectively, either in the short term, or in a sustained way.

Our experience is that collaboration is successful where it is the core of the learning process, i.e. where content supports collaboration not the other way around.

The size of the collaborative groups has a huge influence on the manner of collaboration as well. Groups of 10 to 20 are often no more than serial one to many communication, unless the group has a long time to work out how to interact (not true in a break out session), or has a high level of prior bonding and common experience. In smaller groups, collaboration still only works well where there is a clear need to collaborate or where the individuals are already well preadjusted to collaborate. This is abnormal to most people's experience and therefore tends to be difficult unless heavily facilitated.

The Open Space concept is really interesting but quite alien to a normal corporate environment (unfortunately). That's often why it is more likely to happen in an informal context where the agenda and rules for involvement are less prescriptive AND the contributors are used to peer-peer or group discussion. Otherwise it can repeat the negative experiences you list about break-outs.

In summary, I strongly believe that more focus on people and collaboration and less on content is the direction we should be taking, both in the e-learning world, and the web more generally. Anything that enhances this as a direction should be applauded!

Donald, while I firmly agree with most of what you're saying, I fear there is a risk of throwing out the baby with the bath water if we discount collaborative learning completely.

Over the past three years I've managed to chalk up a number of failed attempts at setting up online learning communities! I believe that failure was largely because we were trying to impose a structure on how the learners 'collaborated', and we just simply interfered too much.

However, I do think that my most recent attempt is working. We've taken a really simple approach; we created a site for everyone on our management development programmes, set up an empty discussion forum, gave them the ability to create their own blogs and then left them to it.

We don't impose any structure on the content; some of it is good, some of it is bad and some is just water cooler talk. Some people post, some people comment, some just lurk. But we have managed to connect 800 managers who are spread across the UK, most of whom would never have had the chance to communicate otherwise.

I believe we've created an environment in which they can learn, and isn't that what we're all aiming for?

Barry (the young bloke from your keynote this morning who knows who Linus Torvalds is.)

I think your post points us in the right direction. I don't want to condemn collaboration altogther, only rebalance our perception of its usefulness.

The 'Vygotsky' brigade would love almost ALL learning to be cpllaborative under their regime of social constructivism. I think your 'bottom-up', as opposed to 'top-down' approach is sensible.

If there's a shared goal, such as manager's collaborating ans ahring knowlege, that's great and this is the way to go. On the other hand, if it's business as usual training, why bother.

“Wow” you are a genius for sure what great ways to get ranked high and obtain good traffic flow from your article. Thank you for sharing your information it was very good reading for sure. I am looking forward to any more of your articles you produce in the near future.