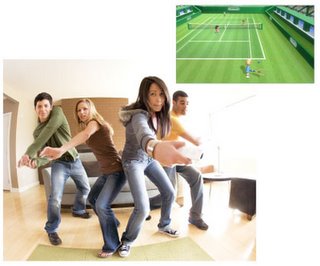 Bunking off
11 am at the Science Museum in the games exhibition, just a few kids either bunking off school or fed up with the duller displays outside, and who can blame them. If you're really interested in games and learning but feel you don't really know much about games give this experience a try. In a couple of hours you'll get a crash course in gaming which focuses on learning by doing, 30 years of gaming experience in one dollop. What's more, you'll get to play with the latest in gaming, the Wii and PS3.

Games and learning
Don't dismiss games as a fad or demonise them as being solitary, violent phenomena. It's a rich medium that has a real role to play (literally) in learning. I've used some great games in learning, in both education and training that offer levels of motivation, feedback, personalisation, incremental learning, contextualisation, rich media mix, safe failure, lots of practice/reinforcement and lots of collaboration.
History is junk
The show is presented largely as a timeline but then develops into themes such as simulations, actions games, sound in games, and finally the future of games. The historical stuff is great for us older guys (let's face it, it was mostly guys) who bought some of these boxes. We all started somewhere, and for me it was the Commodore 64. I programmed my first e-learning on this around 80/81 - teaching the Russian alphabet and German vocabulary. Little did I know that this would become my career. They were all there; PDP 1 from MIT, Ataris, BBC micro, Sega Dreamcast, PC Engine, Super NES, Gemeboys, playstations, PSP, Gamecube, Xbox and dozens of arcade games in their full arcade cabinets.
Games galore
But it's the games that bring back most memories. Within seconds you recall exactly what it was like to pay the game and how thrilling it was to see them develop. Over 100 playable games such as Space Invaders (including the pub table versions), Pac man, Asteroids, Super Mario, Sonic, Doom, Myst, Wolfenstein 3D, Populous, Civilisation, Zelda, Prince of Persia. I really enjoyed some of the early vector games, especially REC 2002 with its disembodied mesh avatar. Also enjoyed Tron, arcade Star Wars and a Japanese game called Go By Train (driving a train). Lost some weight on the Dance Mat.

Games design
There's a fascinating wall chart from DMC, the Scottish games developer behind Grand Theft Auto. A lot of people don't realise that this came out of Scotland, not the US. It's a huge whiteboard with coloured post-it notes denoting epidodes, intros, training, rewards and closes. This was used as the meta-design for the game and allows the team to get one large overview. Reading from left to right shows the major routes through the game. I've seen lots of these storyboard techniques before and we in e-learning could learn something from games designers. On the other hand the games industry in the UK is plagued by poor project management and quality control. They could learn from us.
Wii & PS3
Some of the big names such as Pokemon and Tomb Raider are featured here and there's a rather sad tale to be told about Eidos and its crap management. But they saved the best for last with a guitar PS2 game that allows you to hold a plastic guitar and get some metal licks going. This was projected on the wall and the sound was great. But wait for it - there's a Wii and Playstation 3, which you can try out. I had played a Wii before, and loved the boxing, but had a go at the tennis (even managing to put spin on the ball). The gyroscopic input device is fantastically addictive. The PS3 graphics were stunning.
What a fun way to spend a weekday morning. Nothing better than that other feeling I remember - bunking off school to do something interesting!
at January 19, 2007

Some things will benefit from virtual reality, but not for most training and learning. Video games are addictive and unhealthy. Go for real-world interaction and real challenges.

Real world interaction can be dangerous and expensive, that's why simulating reality is necessary.

I do regard games as addictive (and fun)- that's their attraction. There's nothing wrong with learning from other media.

I have to agree with you, virtual reality is great for flight simulators but it is also great for "sales simulators" and good for "learning to operate certain machines" and for a host of other training areas. Both "hard" and "soft" skills.

While the games should not be the only method of instruction, they can certainly shorten the learning curve or reduce learner danger (both mentally and physcially).

Also, the gamer generation...kids who have grown up playing video games is going to want...no demand learning and computer interfaces that are much more game-like than what is currently available.

Guitar Hero rocks. Like you, Donald, I have two sons, and this PS2 game has completely taken over our household. It is anything but a solitary activity, in fact it's a bit of a bonding experience. And as an ex-muso I can say that it's not a bad simulation of playing an instrument under performance conditions (minus the booze and drugs of course). I wouldn't be surprised if it actually helped kids in learning to read music: it certainly insists that you play in time.
Don't bother with Guitar Hero 2, however: it's rubbish.

Organisations have to quite adult (adult in the sense of being in touch with inner child) for games to be accepted as work. People do get the idea that you learn from games readily, but culturally will people who see someone playing a 'game' accept they are at work?

Imparta's client list shows that there are a number of clients that do get this, but generally the 'game' needs to be in the context of something more serious.