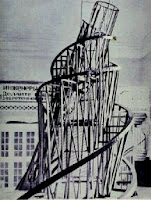 This is Tatlin's Tower, never built, a concoction of constructivist materials and forms, a monument to repudiate of traditional art and painting. It's actually a monument to folly. The idea that one could start anew - the blank slate. At the same time another constructivist, Vygotsky was doing the same for the mind, building theories of cogntive development.

Constructed confection
I often hear discussions of constructivism jump between cognitive theory to a theory of knowledge then educational theory or sociological theory, even philosophical theory. It’s a messy concoction, often at the level of pub-philosophy. Constructivist writing encourages this by making these giant theoretical leaps from simple observations of how knowledge is acquired to grand relativist philosophical theories. It’s a confusing confection.

Social constructivism
To say that one is a constructivist is not to say much as there are many schools making radically different claims. Social constructivism is one of the more extreme schools, where reality is constructed and therefore a function of social invention. Remember how extreme this view is – there is NO reality prior to our social construction. Even for thos who pull back into language mediated reality don't really know where the line is drawn. It is a debate that has little relevance in the practical world of teaching. Unfortunatley, it leads to the incredibly narrow assumption that learning is meaningful only when individuals are engaged in social activities, which results in an obsession with collaboration.

Is constructivism a construct?
The problem with these extreme forms of relativism, and theories of socially constructed reality, is that it is difficult to defend on the grounds of objective evidence. One cannot appeal to a ‘socially constructivist’ view as this, by its own reckoning is merely one among many. There’s no anchor.

To get practical for a moment, one result of all this muddy thinking is the demonisation of ‘practice’, despite the fact that oodles of empirical evidence support the idea of practice as being the key to learning, it is dismissed as being of little value. The net result has been a driving out of practice and homework in schools to the detriment of some types of knowledge acquisition, especially in basic literacy and numeracy, but also in the acquisition of second languages and science.