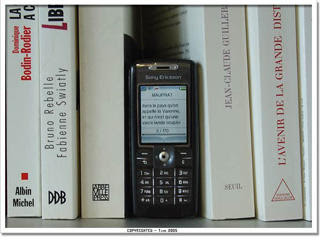 Rankin rubbishes m-novels
I once asked Ian Rankin (question at a literary event) if he would ever consider publishing on the internet, even mobile phones. He thought it a 'daft and disgusting' idea. But it may not be as daft as he thinks. Book sales have been falling in Japan but ‘keitai bukai’, mobile phone novels are doing a roaring trade. There's also a healthy Manga comic on mobiles market. It would seem that this is creating an entirely new literary form.

Keitai bunkia
Written in short three minute episodes, to be read between tube stops, they are written to hook the reader into downloading the next episode. This takes skills as it depends on creating plotlines that create up to a hundred cliffhanging moments, as some have as many as 100 episodes. It's actually evolving into a new form of literary writing.

E-books bombed
E-books have failed as the devices were too big and expensive. Out of 127 million people there are 100 million with mobiles, and as the screens have got bigger, with better resolution, text has become readable. Downloads are superfast and with flat rates, you can access as many as you wish, once you’ve paid a subscription fee of around £2 per month.

Readers mainly young women
Four of the top selling paper books in Japan started as keitai bunkai. The readers are mainly young women with romance (peppered with erotica) the flavour of the month. They seem to like the idea that there’s no bookcover and that they can read in secret. Some admit they have never read a book before.

Future
This is interesting. The book is just as much a technical device as any other medium. With its shape, cover, content page, preface, chapters, paragraphs and index. Books on mobiles are just another example of the rising tide of digital content. I see a bright future for mobile access of text, especially on iPhones-like mobiles. Check out the way it automatically switches your screen when you tip it on it side from portrait to landscape.

These japanese mobile novels could be a model for the 'little and often' spaced practice learning that the psychology of learning tells us works so efficiently.

Hi Donald – format has precedent. During the 19th century, many popular writers earned a living by writing stories in serial form for popular magazines.Many of Charles Dickens' novels were originally published in this manner, for example, and this is the reason that many of them are so long — the more chapters Dickens wrote, the longer the serial continued in the magazine and the more money he was paid.
http://en.wikipedia.org/wiki/Serial. See also Norman Mailer An American Dream http://www.editoreric.com/greatlit/authors/Mailer.html
Sent on behalf of Rex Davies bizlike@aol.com

That's right. Few people read entire books in one sitting. Most, I'd imagine, read them in chunks, hence the chapter structure.

What's of interest here is the way in which new forms of writing and literature may emerge with the new technology, whether it be PCs, mobiles, electronic papaer and other future marvels.

Writers love books but there's no reason why books should be the only or even dominant technology for literature in the future. One could argue that TV/cinema/DVD culture has overtaken the book as the primary medium for fiction and storytelling.