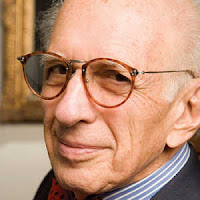 Eric Kandel?
Kandel's one of the most important learning theorists on the planet but barely known. With a Nobel Prize for his work on learning and memory, he’s a towering figure in the science of learning.

Learning is memory
Learning, for Kandel, is the ability to acquire new ideas from experience and retain them as memories (a simple fact often overlooked). His insight was to first recognise that the functional and biochemical features of nerves and synapses in snails, worms and flies are not substantially different from humans. His work on giant marine snails uncovered not only the physiological but molecular pathways in short and storage in long-term memory through spaced practice. As it turns out, he showed that all of the early gestalt psychologists and a great many other memory theorists got this hopelessly wrong.

His work initially focused on Implicit (Procedural) memories such as habituation, sensitisation and classical conditioning skills and habits, but then moved into Explicit (Declarative) facts and events, where he made further discoveries about the molecular mechanisms in memory.

Kandel has opened up the research pathway to knowing how memory works physiologically, thus opening up the possibility not only of enhancing and curing disorders such as Alzheimer’s disease, but understanding how learning actually works, leading to significant improvements in practice.

Seems abstract but has immediate relevance
Even without Kandel's chemical and physiological confrimation, we have an abundance of psychological evidence showing that the distinction is clear. Why then is it so often ignored?

Great posting and an answer to Jay's criticism that you're just knocking people all the time!

I hate to always be the one with the contrary view - but is Kandel really that important to education? Reading about him on Wikipedia it appears that his work, while fascinating and of vital importance to psychology, is mostly about the physical basis of long-term memory. I had not heard of him before this post and had no idea about the physical basis of long-term memory, but I remember (!) being told about the difference between short term and long term memory and its importance to learning when I first started in education 30 years ago. I even remember doing some rather odd Tony Buzan exercises on what helps transfer to long term memory. I have used that ever since and it seems to me that most of my colleagues who take education seriously have done the same.

Surely all but the very worst instructors/designers recognise the need for:

Having said that, there are undoubtably a lot of courses out there which attempt to hose down the student with facts. But I wouldn't put it down to ignorance of Kandel or forgetting about the difference between long and short term memory. I put it down to a failure to handle business pressures. So many clients see the value of training/education in terms of "what is covered". It takes considerable strength of mind to resist that and switch the measure to "what will your delegates be able to do as a result".

You're right Mark, practitioners needn't know why memory works to be effective. However, they do need to know the difference between short and long term memory. Practioners also need to be able to apply this knowledge to their education and training deliverables.

Educators and trainers should also know about episodic/semantic memory, chunking, top down processing, recency/primacy and many other simple psychology 101 theories - but by and large they don't and even when they do, they're rarely applied.

Practitioners may know the items in your list but delivering them in a single session or course doesn't help that much. They need to be delivered over weeks and months to be effective.

Almost every course I've attended has suffered from cognitive overload, too much detail, zero follow up through spaced practice and quick end of course, short-term memory assessment. Assessment is rarely done weeks after the course is finished.

In other words, even the basics are ignored.

Spaced practice over days/weeks/months is difficult to organise. In practice it needs to be done by the learner. A more learner-centric approach would do this.

I've observed hundreds of teachers over many years and the dominant model in their minds is that the brain has a single memory system.

There is no real appreciation of the differences in types of memory and planning around these differences. If there were, hardly any of our courses and methods would be viable.

Sure teachers plan lessons, try to make them interestingt and relevant, repeat things when necessary, but there's no deep understanding of how memory actually works.

Kandel's work is necessary but not sufficient. My son has 'mild' learning difficulties, not classic dyslexia. He seems to have much more difficulty in 'automating' tasks and learning at school than he should. This means he cannot put three tasks together, such as writing legibly, spelling and thinking about what to write. A fairly major disability when you get to GCSEs. I have been unable to persuade his teachers to give him extra practice exercises in maths. They teach something, and give perhaps 10 practice sums max. He gets them right, and may do well if tested shortly afterwards, because he seems to use some other brain area, or short term memory, for learning. But without pages and pages of practice sums, the method will not go into his longer term memory. For a year he worked really hard, was utterly exhausted, but did well. He was to do Higher Maths at GCSE. Then puberty hit, and his brain dumped any maths he had managed to learn after Year 7. Just in time for GCSEs. I am now desperately trying to re-teach him all that maths. He used to sometimes know the answer to a maths problem without knowing why, suggesting there is a memory access problem as well. Equally, he struggles to express himself in structured English, especially in writing, yet he would occasionally suddenly rapidly produce a superbly written paragraph, clear, coherent and beautifully expressed.
With puberty this stopped happening. He has never visualised much, and spells best aurally, not on paper. Most exercises to help transfer to long term memory do not seem to work with him at all.

There are many young people with similar learning difficulties, and there seems to be no funding for diagnosis (tomography?), and no research into what might help improve long term memory and access.
V St Clair