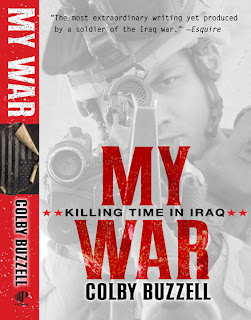 Blooks
Blooks are books from blogs and this year's Lulu Blooker Prize was won by military blogger (milblogger) Colby Buzell. His 'My War: Killing Time in Iraq' was the best of 110 entries from 15 countries. It's been translated into seven languages.

At the same time the US military are stamping down on the use of blogs and the internet by insisting on all entries being submitted to senior staff before publishing. They're also blocking some big websites such as YouTube and MySpace. Millions read these blogs and they perform, in my opinion, a better job than most of the lacklustre journalism that passes for war comment in our newspapers and on TV. What makes it work is the realism and the spirit of 'New Journalism' that came from the likes of Hunter S Thomson and Tom Wolfe. They live it, take part and have strong personal voices.

In my view the US military:
1. don't understand it
2. shouldn't stop it (except breaches of security)
3. can't stop it

Having given talks on this subject to the UK military I'm pleased to report that there's growing interest in blogs and other web 2.0 stuff being used here. They're surprisingly open to these ideas and keen to see how it can be used in learning. Just look at the three 'services' recruitment sites. They're full of blogs and web 2.0 stuff. If you want to recruit good candidates you've got to see the world through their eyes. There are serious recruitment and retention problems in the military which can be solved by modernising the recruitment and training culture.