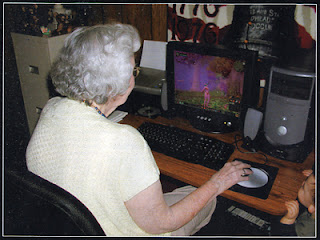 Casual gaming The mass market, family or casual gaming market delivered through MSN Games, WorldWinner, Pogo and Yahoo Games is often ignored when discussed by the Serious games crowd, but it may be just as interesting in the long term than full blown immersive games. This whole market is widening out to include immersive (such as Caspian Learning), casual, puzzles, gambling, PC and console.

Of the games played, more than 60% of workers who play games during their day use brain teasers, including puzzle and strategy games. “When I need a break during the workday, I often turn to online skill games to recharge my brain,” stated WorldWinner player Jeff R. “I’ve found that taking a few minutes and challenging myself with a word game, puzzle or card game can really boost my productivity; I return to work with a fresh perspective and improved creativity. Playing games also gets me revved up before starting a big project – especially when I win.”

MSN Games has a high proportion of female gamers, and is constantly adding content to appeal to a wide variety of audiences. Specifically, 2 of 3 players on MSN Zone and RealArcade are women, 55% of Pogo players are women and 70% of AOL game players are women (publicly quoted statistics). Published data supports the core demographic to be 60% females, ages 24-54. It's known that females tend to like puzzle games, which comprise a lot of the "casual" game market. Why older people and women? They are less intimidating, short, less violent, easy to learn (you don’t need a manual), low cost barrier to entry; free trials, and a different form of marketing.

Such a wonderful article! I have been a Pogo.com player for years and I cannot get enough! They offer so many free online games, and I know I will never be bored when I am playing on Pogo. So much fun-- it keeps my mind sharp but also keeps me mellow after work (and during work)!! I recommend it to all of my friends and family!