The Ambassadors – look and learn 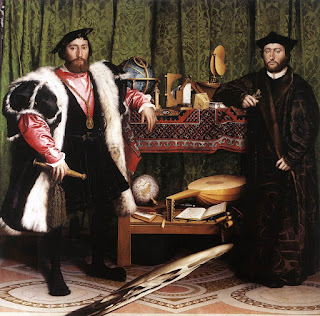 I’m in London at least once a week and always take time out to get to a gallery, museum, exhibition or the theatre. The National gallery is perfect for a quick one hour browse but it’s big, so I usually pick one room or have a specific artist or painting in mind. Last week it was Holbein.
Have a look at this wonderful picture. It’s huge, painted in 1533 of two men aged just 25 and 29, young and still learning. And that’s precisely what the painting is about – learning.

Dress and learning
The two figures represent the secular (left) and the clerical (right). The guy, on the right, wears a black hat and cloak, a colour that symbolised intellectual, introspective qualities and learning. This meaning survives in the black mortar board and cloak seen at University graduations. The guy on the left is a worldly learner, a man of action (see the dagger). Even the floor pattern upon which they stand indicates the Macrocosm, Pythagorean and Platonic themes, with the four ages of man, four seasons and four elements (earth, air, fire and water).

Objects and learning
It’s an unusually large painting but it is the stuff in the middle that has courted most attention. At first glance it looks like a jumble of objects, but it has lots of significance in terms of learning. It’s actually a full curriculum with lots of sophisticated allusions.

Man is the measure of all things here and it is man’s encyclopaedic knowledge of the earth and heavens that is being shown. There’s the distinction between the celestial heavens on the top shelf, and earthly, terrestrial pursuits on the bottom. There still exists this distinction between knowledge and skills, or academic and vocational, in most modern curricula. Indeed it is a full curriculum that is being shown on these shelves; the Quadrivium with four of the mathematical sciences (arithmetic, geometry, music and astronomy) of the seven liberal arts. You have to see this as a bold statement reinforcing the move towards learning as being both practical and academic, unlike the scholastic Medieval curriculum that had gone before. A similar distinction is made between the daring dagger on the left and the hand on a book on the right.

There are books, but there’s also the practical application of knowledge through the instruments of cartography and music. There’s even an allusion to the virtue of mathematics in business through a business arithmetic book. Remember that this was the first flowering of the printing press, commerce and the free exchange of cross-curricular ideas across Europe. Mathematics, then, as now, was a subject central to both practical and philosophical and theological inquiry. The debate still rages today.

But what I love most about the picture are the allusions to the frailty and limitations of the human learner. The broken lute string refers to the difficulty in establishing harmony in human affairs. The imperfections on the faces of the sundial and the illusion of the skull show the limitations of our abilities and endeavours. The skull is quite simply bizarre. It represents mortality and the painting was probably hung alongside a doorway so that you eventually see its grinning face in proper perspective as you walk past. This was the age of plagues, where death was literally on one’s doorstep.

Crucifix
The crucifix peeping out from behind the curtain top left seems to have a unification of the churches function. I’m not so sure, but that’s what’s so great about this painting it can be interrogated for ages and there’s lots of ambiguity. When I first saw this, to my secular mind, it suggested the influential, but retreating role of religion (Hendry VIII is best known for rolling back the power of Church).

Conclusion
The painting shows us that learning is important. It takes us beyond the surface of appearance and earthly or over-abstract affairs. Learning is a matter of balance. This is a lesson educators even today have not fully grasped. The curriculum and learning is still hopelessly mired in old categories. We still teach Latin in schools, maths isolated from its applications, music on classical instruments played by only a few...... The balance between knowledge and skills has still to be addressed over 500 years after this was painted. Next time you have a spare hour in London, go see this masterpiece.
at November 22, 2008

Thanks for this. It's an interesting painting, but the commentary here really brings it to life for me.

As if the human factor behind the credit crunch is a new phenomena.

Mass stupidity and miss placed egos have always been with us.

Humanity deserves recession and will always be cursed by it.

As for online learning. Today most graduates just cut and past other peoples ideas to present in a new format. It's about looking smart, not being smart.

Nothing new in that either.

There's no real social change or evolution. Just humanity dressing up with a new medium.

Why are anonymous postings so banal?