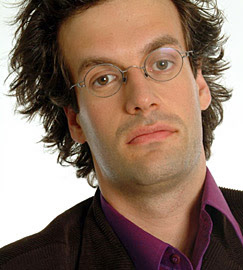 Inspired choice
Another awards bash. Marcus Brigstocke, comedian often seen and heard on TV and radio, was an inspired choice. He opened the World Open Learning Awards by saying welcome to the ‘World Of Leather Awards’, so it was clear that he wasn’t going to take the evening too seriously. And more power to his funny bone. He’s a stand-up comic and not so much an awards ceremony as a fantastically funny comedy set, where he used his considerable observational humour to ridicule the hotel, meal, winners, sponsors and guests. No one was spared. It was priceless.

It started late, so most the guests were well oiled when he took to the stage after an introduction by the sponsor, the Daily Mail! Yes, the Daily Mail. He started by ribbing them mercilessly. His mother reads the Mail, which he described as a broadsheet for people with short arms, and he always knows when she’s read something awful in the Mail as she starts her sentence with ‘Well the thing that really frightens me is...’ (immigrants, Europe, labour politicians, yobs, youths, unemployed etc.) Lord Northcliffe founder of the Mail, famously said that he wanted to give people ‘a daily hate’. It became a running gag.
Audience
We then had him asking the audience where they came from, with a few choice ripostes:

West Country – you see that thing in the centre of the table (a candle) that’s fire, you don’t touch that.
Scotland – they’ll be begging for food at the border soon. The Celtic Tiger; mangy, smokes sixty a day, drinks shorts and eats chips.
Birmingham – the bullring will look great when they take the bubble wrap off, not a place where the inhabitants suffer from a surfeit of regional pride.
Anyone from Norwich? Gimme-six, an entire city with only two surnames, no wonder the Norwich Tourist Board say it's coming into its own (some gasps at that one)...you get the drift.
I won't print what he said about the Germans. Very awkward for me as I was sitting at a table with some delightful folk from Munich! Thankfully they took it in good humour.
Hotel
The Paragon Hotel was called the Paradox Hotel and although he liked the ballroom ‘you’ve always got to worry when the foyer smells like old carpets’. Spot on with that one. The rooms were little better than doss house standard. It wasn’t advisable to walk on your room’s carpet, even with shoes. He asked us all to applaud anyone who tried to eat the poached pear dessert. They were so hard that spoons were bent trying to scoop bits off – the rubric pear, he quipped.

Winners
But his best material was kept for the winners. When he read out the shortlisted Royal Bank of Scotland and their programme ‘Understanding Business’, the entire ballroom exploded into laughter. RBS then actually won an award for another entry, and I swear that ten people got up on the stage – no wonder they’re losing money.

Then there was an award to the BBC for (I kid you not) ‘Safeguarding Trust’, more hilarity, then the BBC again with ‘Leadership Essentials’ and ‘Coaching for leaders’, our table was poorless with laughter. Don’t get me wrong the guys at the BBC do great stuff, but oh the irony. As he said, ‘sometimes the jokes just keep on writing themselves’. There was by now a curious correspondence between real world disaster stories and winning training. A statement was read from the judges that said they had awarded the BBC the award because it had been taken by 21,000 people, an astonishing take-up. True, Marcus said, he had also taken the programme, as it was compulsory. Even the BBC people were laughing like drains.
You wonder about trainer's ability on the marketing front when the presenter can barely pronounce the title of the programme. We had some real gems:
European Pedagogical International Computer Training Licence - Pedagogical!
West Midlands Local Government Association West Midlands Coaching Pool Partnership West Midlands Coaching Pool Programme - Was this a record beating title for playing pool?

When a shortlisted NLP programme, made for the bank First Direct, was read out it felt like the 1990s. Surely this old nonsense has had its day? Reed Learning won Learning Organisation of the Year, taking us back to the 1980s, and the penultimate award seemed to be for best building, won by the no doubt fascinating, flipchart equipped Moller Training Centre. Suddenly it all felt like the 1970s.

However, it all ended on a high as Charles Jennings won the Outstanding Contribution to E-learning. Marcus was puzzled by the choice of James Brown’s Sex Machine when Charles walked to the stage, or is there more to Charles than meets the eye? And well done to the other two in this category – Laura Overton, tireless campaigner and Neil Lasher, who had a Grand Prix car on his stand in the exhibition.

My favourite gag of the evening was, ‘Only 36 shopping days to Christmas, except if you’re a bloke, then there’s only one.’ So congratulations to the organisers for a great night, a night when an industry learnt that it was OK to chuckle at itself. After staggering to bed at 3 am, I had to get up at 5.45 the next morning to catch a train - I was in dire need of Durham County Council's shortlisted 'Substance Misuse e-Learning Solution'.
at November 20, 2008

This post made my day! Cheers Donald (and Marcus)!